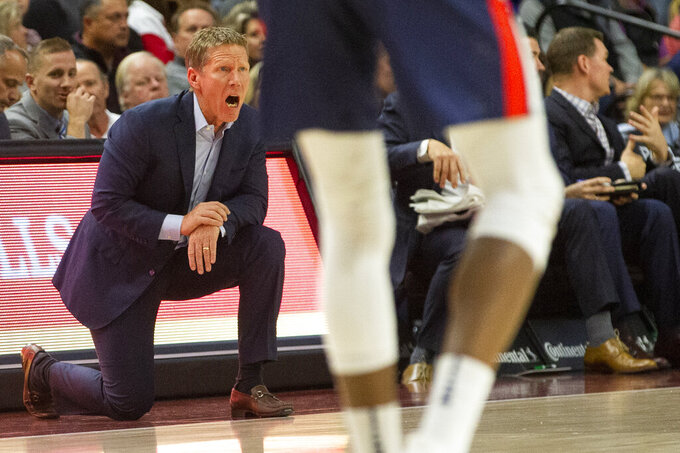 Gonzaga coach Mark Few yells out a play to his offense during the second half of the team's NCAA college basketball game against Texas A&M on Friday, Nov. 15, 2019, in College Station, Texas. (AP Photo/Sam Craft) 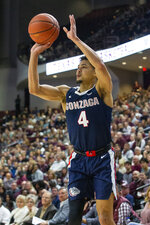 Gilder and Ryan Woolridge each scored 16 points, and No. 8 Gonzaga routed Texas A&M 79-49 on Friday night.

“We had to figure out how to make the easy play, not just try and make a home-run play every time,” Woolridge said. “We needed to keep moving the ball, and we knew something would eventually open up.”

Gilder also had seven rebounds in his return to Texas A&M. The senior guard transferred last summer after the Aggies fired Billy Kennedy and hired Buzz Williams from Virginia Tech. He sat out last season following the discovery of a blood clot in his arm.

“There had to be a lot going through his mind, with him having been here so long,” Gonzaga coach Mark Few said.

Williams tried to talk Gilder into staying in College Station, but the coach said Gilder seemed set on leaving.

“Coach Few had talked to me about coming in and being a part of something special, being part of a family that’s been winning year in and year out,” Gilder said. “I just made the best decision for my family, at the end of the day.”

Gonzaga missed 12 of its first 15 shots over the first eight minutes. But it eventually found its form in its first visit to College Station.

The Bulldogs scored 20 straight points from about 11 minutes remaining in the first half until a little more than two minutes before halftime – a welcome break for Texas A&M after it was run up and down its court.

“There were lessons throughout, in every possible way,” Williams said. “They’re really good and incredibly well-coached, with an elite-level roster in terms of how they want to play.”

Gilder said his first home is Dallas where he grew up, his second home is A&M and his third home is now Spokane, Washington.

Gonzaga: The Bulldogs are off to another good start this season. The Aggies led early on, but were unable to keep up with Few’s balanced team.

Texas A&M: Williams has some work to do in his new job with the Aggies.

Nebo blocked his old teammate Gilder on a drive to the basket, but Petrusev was there for the putback, even absorbing a slap in the face along the way late in the second half.

“His Virginia Tech teams were tough as nails. You didn’t want to run into them in the NCAA Tournament. This is home for him, and he’ll get things rolling. It just takes some time.” — Few on Williams.