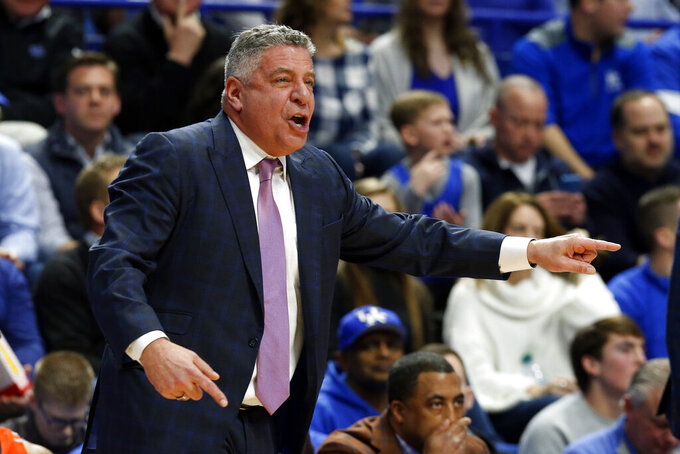 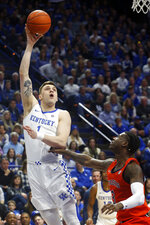 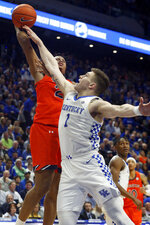 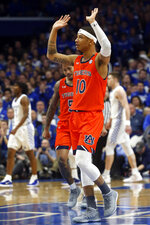 LEXINGTON, Ky. (AP) — Other than a couple of instances, Kentucky has needed every possession to first gain an edge and then keep it in a gauntlet of close victories.

The No. 8 Wildcats followed the same pattern to answer yet another challenge against No. 15 Auburn, earning a win along with another Southeastern Conference title.

Immanuel Quickley had 18 points and a career-high 12 rebounds, Kentucky used a big run in the first half before holding off the Tigers and clinching the SEC regular season championship with a 73-66 victory Saturday.

A Rupp Arena crowd of 20,638 cheered loudly after the final horn, but the Wildcats exited the court like any other game. They soon received blue-and-white baseball caps signifying their achievement that required eight consecutive wins this month — six by a total of 38 points.

“It's just good for this team,” said Quickley, who shot 3 of 10 but made a big impact with all of his rebounds on the defensive end.

“I think a lot of people doubted us early. We lost a couple of tough games in (Las) Vegas and people questioned if we could get to this point and eventually get to a Final Four or a championship or something like that. We stayed faithful to the grind and trusted the process.”

The Wildcats (24-5, 14-2) entered with a two-game lead on the second-place Tigers (24-5, 11-5) but had to overcome a 20-11 deficit before responding with the 20-3 spurt over 5:47 and eventually build an eight-point advantage. Auburn fought back to within 53-50 early in the second half, but Kentucky stayed ahead in a foul-plagued half by making 14 free throws down the stretch. That included seven by Quickley, who made all 11 from the line.

Kentucky made 27 of 33 free throws while Auburn hit 13 of 22 in a game featuring 23 fouls by each team. The schools also finished with 38 rebounds each, which helped the Tigers outscore the Wildcats 12-5 in second-chance points.

Auburn fought to within a possession at times but couldn't get even. Meanwhile, Kentucky pushed the ball inside to create chances at the line and convert enough of them to offset 42% shooting, including 2 of 13 from beyond the arc.

“We knocked some free throws late and Immanuel always knocks down his free throws,” said Kentucky guard Tyrese Maxey, who made 7 of 8 to finish with 17 points. “I tried to make some a little bit, so I don't get in trouble.”

Nick Richards scored 14 points and Nate Sestina 11 off the bench as the Wildcats avenged a 75-66 loss to Auburn on Feb. 1.

The Tigers began pursuit of their first-ever season sweep by hitting their first four 3-pointers, including three by Daniel Purifoy for their first nine points. They cooled off significantly from there and hit just five of the next 30 attempts, including 2 of 16 after the break.

“I figured we need to spread it and shoot 3s, and we did a pretty good job," Auburn coach Bruce Pearl said. “The closer you get to the basket the better you don’t always look against them. If we make a couple of those shots and a couple of free throws, we are right there.”

J’Von McCormick had 13 points and Austin Wiley 10 for the Tigers, who shot 36% and had their two-game streak snapped.

Kentucky graduate Nick Hostetter won $10,000 by hitting a half-court shot during a first-half promotion by a local bank. The Lexington native celebrated with a wild run around the floor that came close to the Wildcats' huddle.

Kentucky’s continued roll could boost their top-10 standing. Auburn might lose a few spots in the rankings.

Auburn: The Tigers still have a good chance to earn one of the top four seeds and a double bye for the SEC Tournament. But the loss leaves little room for error over the final two contests with one game separating four schools in the standings.

Kentucky: The Wildcats claimed their 49th SEC regular-season title and the No. 1 seeding for next month’s tournament in Nashville. It was also their sixth in 11 seasons under coach John Calipari and first since 2017. Most importantly, they capped February by avenging their last loss against the Tigers that opened the month.

“I never stopped believing in this group,” Calipari said. “I said we would be fine. I didn’t know we would get to this point.”

Auburn: Hosts Texas A&M on Wednesday before closing the season at Tennessee on Saturday.

Kentucky: Hosts Tennessee in a late game Tuesday before visiting Florida in the season finale on Saturday.