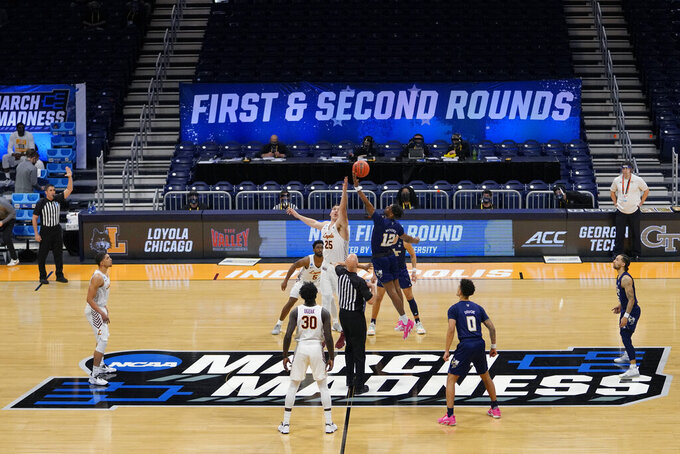 Georgia Tech tips off with Loyola Chicago at the start of a college basketball game in the first round of the NCAA tournament at Hinkle Fieldhouse, Indianapolis, Friday, March 19, 2021. (AP Photo/AJ Mast) 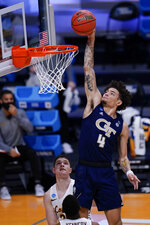 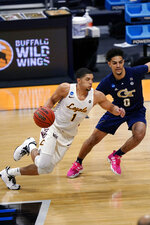 INDIANAPOLIS (AP) — Loyola Chicago might be the only team that feels as though little has changed about the NCAA Tournament.

Probably has something to do with all the winning the Ramblers do.

The surprise semifinalist in 2018, Loyola was relegated to the NIT the next year and missed out on the tournament entirely — along with everyone else — when it was canceled due to COVID-19 last season. But with key pieces of their Final Four team leading the way, the eighth-seeded Ramblers marked a triumphant return to college basketball's biggest stage Friday with a 71-60 victory over No. 9 seed Georgia Tech at Hinkle Fieldhouse.

Lucas Williamson scored 21 points in a dynamic performance by the defensive whiz, Buddy Norris added 16 points and All-America forward Cameron Krutwig had 10 as the Ramblers (25-4) advanced to play No. 1 seed Illinois on Sunday.

“It is an unusual tournament,” said Williamson, a freshman on that last NCAA tourney team, “but I will say everything is unusual about it until you get on the floor. We had some fans in the building, they were in here hyping it up. Once you're on the court, you're just playing basketball.”

Doing it at a high level, too — especially when it mattered.

After trailing 43-40 midway through the second half, Loyola heated up from beyond the arc and clamped down on defense, forcing Georgia Tech (17-9) into a series of missed shots and ugly turnovers during the decisive final five minutes.

Keith Clemons hit a 3-pointer that gave the Missouri Valley champs a 62-54 lead with 3 1/2 minutes to go, Norris added another from the top of the key to make it 67-56 with just over 2 minutes left, and the ACC Tournament champs finally ran out of answers as their eight-game winning streak came to an end.

“Our guys had tremendous grit to themselves,” Loyola coach Porter Moser said. “They just had a grit to them.”

Jordan Usher scored 15 points, Michael Devoe had 14 and Jose Alvarado 13 for the Yellow Jackets, who were forced to play without ACC player of the year Moses Wright after the big man tested positive for COVID-19 earlier in the week.

“I feel so bad for him,” Yellow Jackets coach Josh Pastner said. “He worked so hard, a chance of lifetime to play in the NCAA Tournament, and unfortunately he wasn't able to play. I feel sick for him. I just feel sick for him.”

The Ramblers got off to a slow start, struggling through jitters and early turnovers, but Williamson and Krutwig eventually got them on track. They led Loyola on a 15-4 run midway through the first half to take a 30-25 lead at the break.

Georgia Tech wiped it right out by making eight of its first 11 second-half shots.

Sister Jean’s beloved bunch regained the lead midway through the half but never got comfortable, the teams playing a game of one-upmanship down the stretch. Williamson hit a 3 for the Ramblers, Alvarado a cartwheeling layup for Georgia Tech; Krutwig would get a baby hook to go, Usher would throw down a dunk for the Yellow Jackets.

It wasn't until Clemons and Norris hit their 3-pointers in the closing minutes that Loyola finally broke free.

“They deserve so much credit,” Pastner said. “It's a great basketball team we played, and the way Coach Moser has it running, they're going to be building a statue in the middle of Chicago if they haven't already.”

Georgia Tech sorely needed Wright in the paint. The Yellow Jackets were out-rebounded 30-17 and managed just one on the offensive end. And without second-chance opportunities, their cold shooting down the stretch cost dearly.

Loyola showed why it was No. 1 in the nation in scoring defense this season. The Ramblers clogged up the paint to prevent drives to the basket, forced Georgia Tech into long jumpers and made life difficult for its perimeter players.

Sister Jean Dolores Schmidt, the Ramblers' 101-year-old team chaplain, rolled into the fieldhouse in her wheelchair shortly before tip. Sister Jean became an icon during their 2018 Final Four run, but she hadn't attended a game in person since the pandemic began. She recently was vaccinated but has continued to keep her distance from the team, delivering the Jesuit school's pregame prayer virtually all season and again during the tournament.

Even though Wright remained in quarantine after testing positive Monday, his No. 5 still made it onto the floor of Hinkle Fieldhouse. Alvarado donned his teammate’s jersey rather than his own No. 10 for the first-round game.

The Ramblers play the top-seeded Fighting Illini for a spot in the Sweet 16. They've won three straight in the series, all on their campus in Champaign, but Loyola beat them in the 1963 NCAA Tournament on their way to the championship.