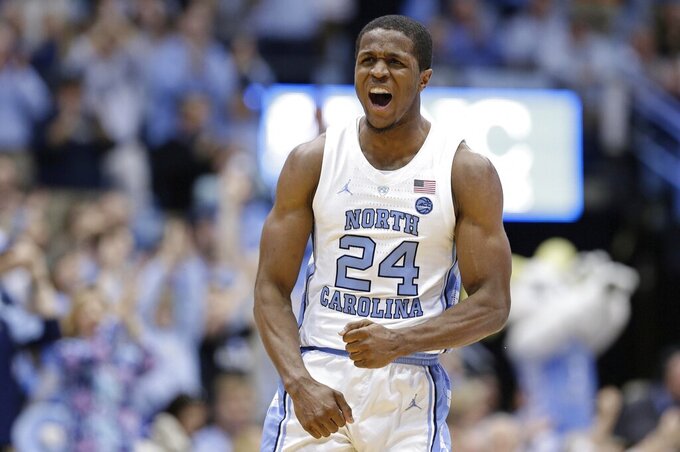 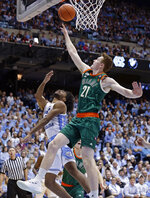 CHAPEL HILL, N.C. (AP) — North Carolina hit every big shot it needed in an unexpectedly dire situation at home against struggling Miami. That allowed the eighth-ranked Tar Heels to hang on for their best Atlantic Coast Conference start under Roy Williams.

Freshman Coby White matched his season high with 33 points and Luke Maye and Kenny Williams each hit critical 3-pointers to help the Tar Heels edge the Hurricanes 88-85 in overtime Saturday. The victory pushed the Tar Heels (19-4) to 9-1 in the ACC for the first time in their 16 seasons under their Hall of Fame coach.

"I feel very fortunate to say the least," Roy Williams said. "I questioned our kids' toughness throughout the whole game, and was still doing it at the end. But I think they answered it pretty well down the stretch. They made plays, made shots."

They sure did. Big ones, too.

First there was White, who scored 23 points with six 3-pointers in the second half alone. That included one with 41.0 seconds left in regulation to bring UNC to within 75-74.

Next was Maye, who hit the overtime-forcing 3 with 10.2 seconds left.

Finally there was Kenny Williams, the senior defensive stopper who had been quiet offensively before hitting the go-ahead 3 with 2:08 to go in overtime.

But on Miami's final possession, with UNC fouling to protect a three-point lead, White poked the ball loose from Lykes. Williams dove on the floor to recover the ball for a game-sealing turnover that allowed UNC to kill the final seconds.

"Chris Lykes at one end, Coby White at the other was quite a show," Miami coach Jim Larranaga said, adding: "We came ever-so-close to accomplishing what we hoped to do today."

Miami: The Hurricanes, who won just once in January, shot 57 percent and made 10 3-pointers in the second half to flirt with a stunning road win. They led by seven with 7:34 left in regulation before falling to 0-7 against ranked teams this season.

UNC: The Tar Heels have been rolling since a lopsided home loss to Louisville on Jan. 12, winning the last four games by double-digit margins. That included going for 113 points in Tuesday's win against rival North Carolina State. The Tar Heels nearly squandered all that momentum in one afternoon, too.

Miami got bad news Friday when starter Zach Johnson (13.1 points) sprained an ankle in practice, leaving his status in doubt for the game. Larranaga said the 6-2 redshirt senior traveled with the team and wanted to give it a go despite wearing a protective boot.

Last year, Miami blew a 16-point lead but won when Ja'Quan Newton hit a running 3-pointer from near midcourt at the horn in a 91-88 win. This time, Lykes missed a 3 to end regulation.

"Some of the shots that guys hit today," Lykes said, "kind of felt like last year."

Roy Williams said he called "more plays the last five minutes than I've called in the entire year." That included the late 3s by Maye and Williams.

"It's always easy when Coach calls a set for you," Kenny Williams said. "That's an extra bit of confidence from Coach. I had no other choice but to try to come through."