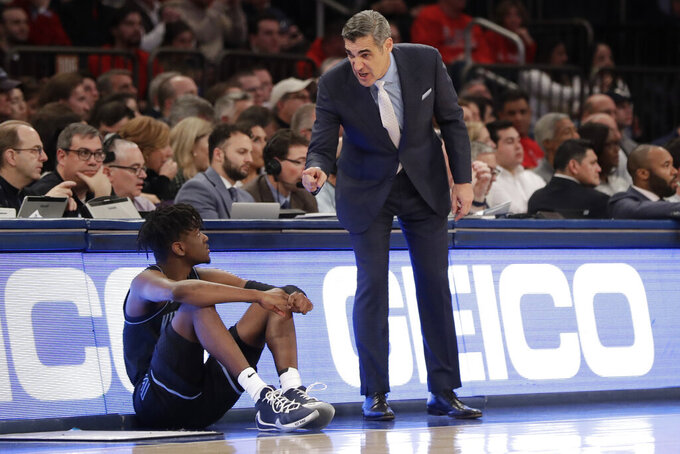 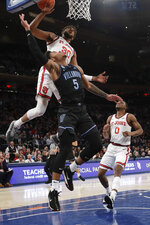 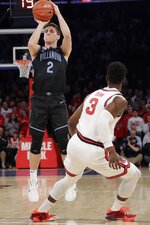 NEW YORK (AP) — Down an experienced starter, the Villanova Wildcats still had more than enough firepower to trounce a St. John's team that's given them trouble lately.

“I'm really pleased with their development,” Wright said. “They're starting to get a little bit better at everything. Now we've got to build consistency.”

“They made open shots. They did whatever they wanted to do,” Red Storm coach Mike Anderson said.

Samuels, a 6-foot-7 junior averaging 11.1 points and five rebounds per game, sat out with a sprained left foot after getting hurt during Saturday's victory at Providence. His absence hardly hindered the Wildcats, who quickly recovered from a slow start and opened a 24-point bulge in a second half that was never competitive.

“We were really concerned about not having him in there. Especially defensively,” Wright said. “You always look forward to those opportunities as a coach. You have guys that you know you can play, you just have guys ahead of them. So obviously we feel bad about Jermaine, but feel good about the guys stepping up.”

Mustapha Heron was held to three points on 1-of-7 shooting — he entered averaging 14.3 points per game, including 18.7 over the previous three.

“He had some open looks and just couldn’t knock it down,” Anderson said.

St. John's jumped out to a seven-point lead in the first three minutes, but the Wildcats took control with a 13-0 run that gave them a 28-19 advantage. Moore had five points and Bey drained two of his five 3s during the spurt as the Red Storm went scoreless for 4:28.

Villanova closed the first half with the final seven points and was ahead 39-26 at the break. The 6-foot-3 Gillespie had nine rebounds and five assists to go with his four points in the period.

The junior point guard, who has 21 rebounds in the past two games, finished with six assists, three steals and just one turnover in nearly 37 minutes against the Red Storm's pressure defense.

“He’s a beast, man. He is," Wright said. "We haven't been rebounding well, so he goes and rebounds his head off, you know? That's impressive. It's really impressive.”

The Wildcats outrebounded St. John's 40-31 had a 16-4 advantage in second-chance points.

“Their experience showed. We had a bunch of layups that we missed,” Anderson said. “It just seemed like we were a half-step slow to wherever they were and they took advantage of it.”

“I didn't think we played the type of defense that we’ve been playing all year long,” he added. “They controlled the tempo.”

Wright said Samuels wasn't close to playing in this one, but the team hopes to have him back Saturday against Creighton. “He’s getting better. I don’t think it’s serious,” Wright said.

Villanova: Chasing another Big East title, the Wildcats are a half-game behind first-place Seton Hall in the conference standings. The 10th-ranked Pirates, yet to lose a league game, host last-place DePaul on Wednesday night.

St. John's: After going 11-2 out of conference with wins over West Virginia and Arizona, the Red Storm's only two Big East triumphs have come against DePaul — including a victory Saturday that marked their first true road win of the season. But they were unable to follow it up against a top opponent.

“I thought we would come and play a lot better, but that’s basketball in the Big East,” Anderson said.

St. John's plays three of its next four at home, all against teams currently unranked, and probably needs at least a victory or two to maintain reasonable hopes of a postseason bid in Anderson's first season as coach.

Before the game, a moment of silence was held for Kobe Bryant, his daughter and the seven others killed in a helicopter crash Sunday in California.

Villanova: After winning two road games in four days, the Wildcats return home to face well-rested Creighton (16-5, 5-3 Big East) on Saturday afternoon. Villanova won 64-59 on Jan. 7 at Creighton, which has won three straight and sits just outside the AP Top 25 this week.

St. John's: Hosts high-scoring Georgetown on Sunday afternoon as Hoyas coach Patrick Ewing returns again to Madison Square Garden, where he was an NBA star for the New York Knicks. The Red Storm were routed 87-66 at Georgetown on Jan. 8.