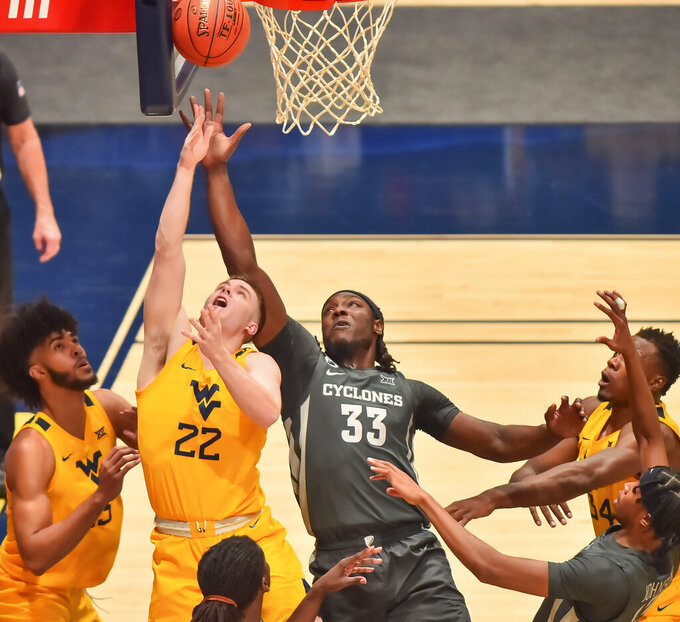 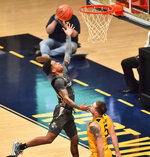 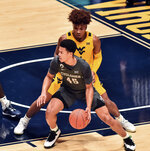 MORGANTOWN, W.Va. (AP) — Miles McBride found a way to steer No. 8 West Virginia through a slippery stretch when Iowa State was disrupting the Mountaineers’ offense.

McBride scored 18 points, including the go-ahead free throws with 21 seconds left, to lift the Mountaineers to a 70-65 victory over the Cyclones on Friday night.

“It’s my job as a point guard to really get everybody in their positions and kind of calm the game down and try to smooth things out,” McBride said. “Just try to learn and win, and that’s what we did tonight.”

Derek Culver had 18 points and 12 rebounds for his fifth double-double of the season for the Mountaineers (7-1, 1-0 Big 12), who scored the final six points. They overcame poor shooting in their conference opener by making 14 of 16 free throws over the final six minutes.

West Virginia coach Bob Huggins had warned his players that visiting teams were 4-0 in the Big 12 entering Friday’s games.

It almost went to five.

“He drove past us, he shot it over us,” Huggins said. “He made some hard shots.”

Bolton was called on an offensive foul while driving the lane with 36 seconds left. But after an official review, West Virginia’s Gabe Osabuohien was called for a foul on the play trying to draw the charge. Bolton made both free throws for a 65-64 lead.

But Iowa State didn’t score again. McBride drew a foul on Bolton at the other end of the court and made both free throws to put the Mountaineers ahead to stay. Taz Sherman and Emmitt Matthews capped the scoring with a pair of free throws apiece.

West Virginia made just one field goal over the final eight minutes and shot 38% (21 of 55) for the game.

Iowa State entered the game with the Big 12′s worst rebounding margin, but the Cyclones outhustled and boxed out the taller Mountaineers for missed shots and loose balls. They also threw crisp passes around the perimeter to set up open inside baskets.

The screams from Iowa State’s bench grew more noticeable early in the second half in an empty arena where the general public isn’t allowed this month due to the coronavirus pandemic. Bolton had a 3-pointer and a three-point play on back-to-back possessions, part of a 12-0 run that put the Cyclones ahead 43-34.

“Really proud of the effort from our guys, and thought that they fought hard and competed for 40 minutes,” Iowa State coach Steve Prohm said. “West Virginia is a strong team and I thought we battled them physically.

“We took a step forward tonight and this is something that we can build on going forward.”

Iowa State: The Cyclones outplayed the Mountaineers for most of the game but couldn’t get a basket down the stretch.

West Virginia: The Mountaineers looked lethargic at times against the Big 12′s worst defense. The Cyclones entered the game allowing 78 points per game.

West Virginia should stay in the top 10 after playing its only scheduled game this week.

West Virginia: Plays at No. 5 Kansas on Tuesday.