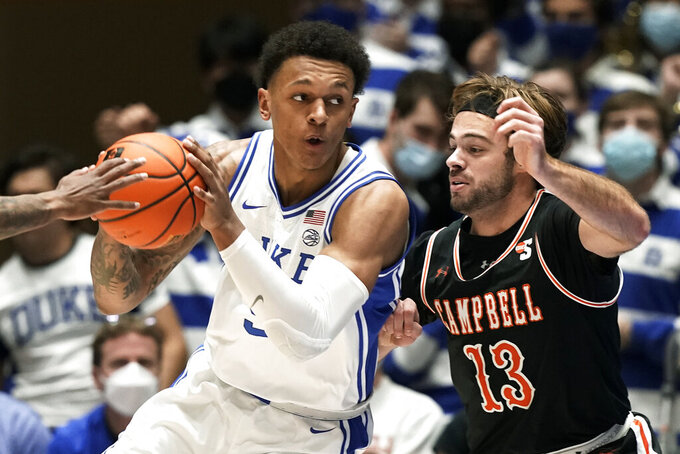 “That was really a good basketball game. (Campbell) is a really well-coached disciplined team. That can be a first round NCAA (Tournament) game tonight,” Duke coach Mike Krzyzewski said.

Campbell (2-1) built a 10-point lead in the first half while Duke’s Wendell Moore Jr. was being checked out for a potential knee injury.

When Moore reentered the game at the 13:02 mark, Duke embarked on a 25-11 run to close out the first half, heading into intermission with a four-point advantage. During that stretch, Moore had eight points on 3-of-6 shooting, two steals and a rebound.

Moore finished the game with 15 points, five rebounds, five assists and three steals — one night after getting Duke’s fifth triple-double in program history.

“I knew I was ready to play right away, as long as I knew I could walk,” Moore said. “I’ve learned a lot about this team. I think the most is — how much fight is in our guys. Our guys came prepared for every game. That’s uncommon to do.”

Duke never trailed in the second half, and used an 11-4 run to build a 13-point lead.

Duke: The Blue Devils struggled when Moore wasn’t on the floor, but played well enough to not be the latest Atlantic Coast Conference team to suffer an upset. Five ACC teams have lost to mid-majors this season.

“We had a lot of adversity with Wendell getting hurt on the first play. I thought it scared us. It knocked us back. And then (Campbell) scared us with how well they played. And then we collected ourselves,” Krzyzewski said. “I thought in the last 32 minutes of the game, we played great defense.”

Campbell: The Camels were picked to win their division in the Big South. After hanging with Duke for the majority of the game, Campbell appears to be equipped to live up to its preseason expectations.

“We’re a really good program at this point, and I’m kind of at the point where the consolation loss is not as exciting. To me, it stings, pretty hard,” Campbell coach Kevin McGeehan said. “But I thought we played well enough to give them a basketball game. And I’ve seen a lot that don’t look like that here, so I think there’s something to be said for that.”

After making 6 of 15 shots from behind the arc in the first half, Campbell didn’t connect on any of its eight attempted 3-pointers in the second half. Duke was 284th in the nation in 3-point defense last season, allowing opponents to shoot 35.6% from deep. Campbell finished the night shooting 26.1% from 3-point range.

The Blue Devils are 3-0 to start Krzyzewski’s final season. This win alone won't give them a bump in the polls, but coupled with victories over Army and No. 10 Kentucky, Duke might sneak up the list.

Duke: In their third of five straight home games, the Blue Devils host Gardner-Webb on Tuesday.

Campbell: At Marshall on Thursday.