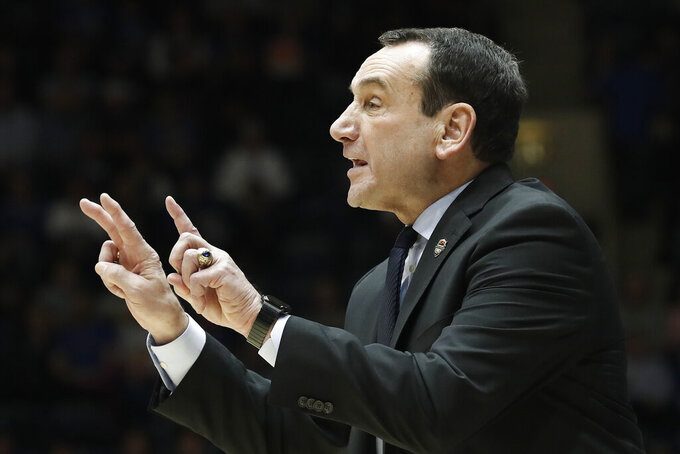 FILE - In this Jan. 28, 2020, file photo, Duke coach Mike Krzyzewski gestures during the second half of the team's NCAA college basketball game against Pittsburgh in Durham, N.C. Krzyzewski's ninth-ranked Blue Devils are picked to finish second in the Atlantic Coast Conference behind No. 4 Virginia. (AP Photo/Gerry Broome, File)

Duke coach Mike Krzyzewski sees plenty of depth and balance on his latest roster. He sounds like he intends to use it, too.

The ninth-ranked Blue Devils have just five returning letter winners from last year and must replace their top three scorers, with two of those being players who each won honors as player of the year in the Atlantic Coast Conference. Sophomores Matthew Hurt and Wendell Moore Jr. are the top returnees and they’re joined by another top-flight recruiting class in what has become an annual roster overhaul for the program in the one-and-done era.

“We don’t have as much separation from 1 to 11,” said Krzyzewski, who is entering his 41st season at Duke.

“There are a lot of good pieces, and so we’ll be playing more people than we’ve normally played. But that doesn’t mean it’ll be equal playing. When you get separation, the guys who separate some need to play more – and they will.”

It will take time for the Blue Devils, picked to finish second to No. 4 Virginia in the ACC race, to find those answers. But this isn’t likely to be a team that will be dominated by one or two carry-the-load scorers like with Associated Press national player of the year Zion Williamson and All-American teammate RJ Barrett two seasons ago.

Last year’s team was led by AP league player of the year Vernon Carey Jr. inside and Tre Jones – the league’s pick as ACC’s top player – at the point. They both left early for the NBA along with freshman Cassius Stanley, leaving the 6-foot-9 Hurt as the top returning scorer (9.7 points per game).

Hurt and Moore both saw significant work as freshmen and now transition to leading roles.

Hurt started 22 games and shot 39% from 3-point range last year, while Krzyzewski said Hurt had improved last year in getting his shot off quicker by being better prepared when the ball came his way. Hurt said he added about 20 pounds of bulk to his long frame since last season.

Then there’s Moore, a 6-5 wing who averaged 7.4 points and 4.2 rebounds. He made his biggest mark last year with his buzzer-beating putback in overtime to beat rival North Carolina on the road.

Duke must find a new floor leader with Jones’ departure.

Roach is 247sports' No. 4-ranked point guard this year, while 6-2 senior Jordan Goldwire is expected to earn minutes with his tenacious on-ball energy and Moore got some work at the point last year.

Roach and Goldwire could play together. Associate head coach Nate James mentioned both when listing a potential starting lineup if the Blue Devils had to play right now.

Duke will have some size and versatility among its newcomers.

Duke has long thrived at famously hostile Cameron Indoor Stadium with the rowdy “Cameron Crazies” student section packed into bleachers right up on the sideline. But the school announced this week it would start basketball and other winter-sports seasons with no fans in attendance due to the coronavirus pandemic.

“Obviously not having the Crazies is a huge thing for us,” Moore said. “But at the same time,w e always have to come ready to play.”

The Blue Devils open against Gardner-Webb on Nov. 25 then have early marquee matchups against No. 13 Michigan State in the Champions Classic (Dec. 1) and No. 8 Illinois in the ACC/Big Ten Challenge (Dec. 8).