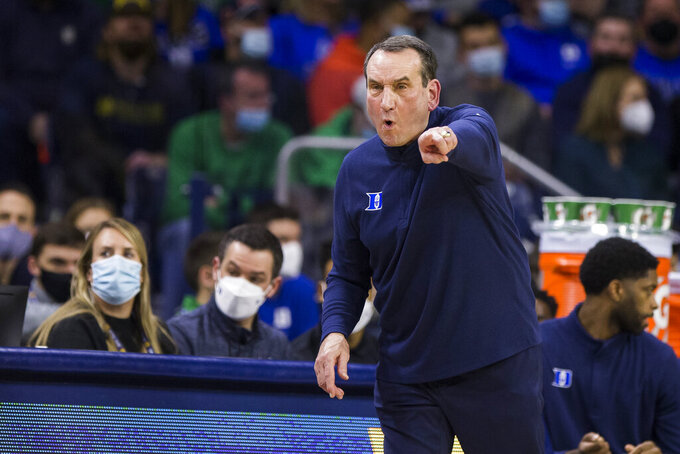 No. 9 Duke at North Carolina. Saturday marks retiring Hall of Famer Mike Krzyzewski’s last trip to Chapel Hill for the latest installment of the fierce rivalry. It’s also the first time for first-year coach Hubert Davis to lead the Tar Heels in a matchup of programs with a combined 11 NCAA championships.

Virginia (13-9, 7-5) is heading into the final full month of the league schedule needing wins to improve its NCAA Tournament chances. The Cavaliers visit the Blue Devils on Monday in a huge opportunity, though Virginia has split its last four games and lacks its traditionally elite defense by ranking 99th in KenPom’s adjusted efficiency (98.9 points allowed per 100 possessions) as of Wednesday’s games.

Notre Dame freshman Blake Wesley has been a consistently good scorer for Mike Brey’s Fighting Irish, but he’s hit a a snag of late. The NBA prospect is averaging 14.1 points entering Saturday’s trip to North Carolina State, but he has managed just 11 points on 5-for-28 shooting (17.9%) while missing all 10 of his 3-point tries in the past two games.

The league continues to rank as the sixth-best conference in KenPom’s national rankings, trailing the rest of the Power Five and the Big East. … The league has five teams inside KenPom’s top 25 in adjusted offensive efficiency, led by Syracuse (115.3 points per 100 possessions) at 15th and Duke (114.9) at 16th. But the Blue Devils (14th) are the only ACC team in KenPom’s top 60 of adjusted defensive efficiency. … Virginia Tech is shooting 41.1% from 3-point range to rank fourth nationally. … North Carolina’s Armando Bacot (three) joins Kentucky’s Oscar Tshiebwe (five) as the only Division I players with at least three games of 20-plus rebounds this season.

Third-ranked North Carolina State stumbled Tuesday at No. 20 Notre Dame, and that has opened up the women’s race after the Wolfpack raced out to a 10-0 ACC start.