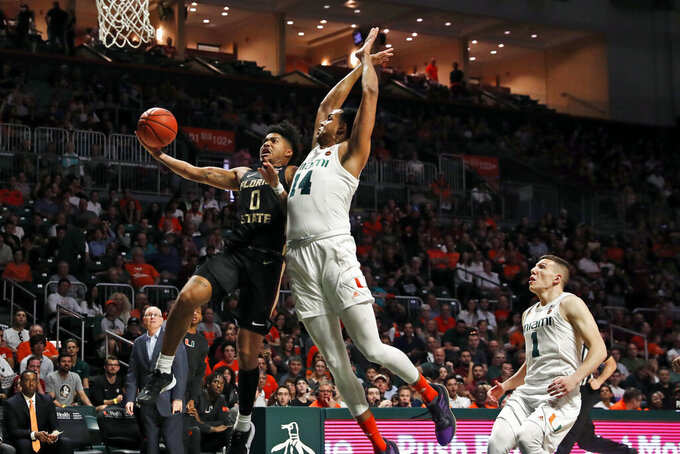 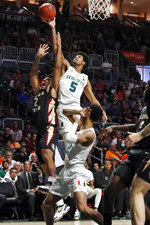 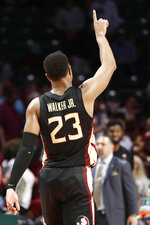 His players: not so much.

The No. 9-ranked Seminoles forced 24 turnovers, including three in a row in overtime, and rallied Saturday to earn their ninth consecutive victory by beating Miami 83-79.

“I was very proud of the way our guys maintained their composure.,” Hamilton said. “When Miami went up nine, I was probably the only one who was really concerned. Our players kept saying, ‘We can win this game.’"

Walker played only 23 minutes because of foul trouble but scored 19 points, all in the second half, Malik Osborne's three-point play with 2:25 left in overtime put the Seminoles ahead to stay.

“A four-point victory in my mind is an ACC blowout,” Hamilton said.

Florida State (16-2, 6-1 Atlantic Coast Conference), which began the day tied with No. 3 Duke for the league lead, beat Miami for the fourth time in a row. The Hurricanes (10-7, 2-5 ACC) lost in league play at home for the third time.

“We did everything it took to win the game except win,” Miami coach Jim Larranaga said. “We did a very, very nice job. We weren’t able to close.”

Chris Lykes had 24 points but also six turnovers for the Hurricanes. Their turnover total was a season high.

The Seminoles won despite shooting 42 percent and committing 16 turnovers. They compensated by scoring 21 points off takeaways.

“The last few minutes we got some deflections and steals. That’s who we are,” Hamilton said. “During that stretch we were able to turn it up a notch or two, and that really made a difference in the game.”

Not that Florida State's characteristically strong defense wasn't stout from the start. The Hurricanes had to call a timeout when they were trapped on the game's first possession. They blew a dunk, threw up air balls and had 10 shots blocked.

But Miami stayed in the game early with a strong defensive effort of its own. DJ Vasiljevic sank a 3-pointer and then scored on a breakaway to give the Hurricanes their biggest lead with 5:20 remaining, 65-56.

“We came to the huddle and the fans were screaming and frantic, but we all said, ‘We’ve been in this situation before. We’ll get this win,'” Vassell said. “We knew we had to turn it up on defense. We started more pressure on them and getting out in transition — playing our way.”

Walker's three free throws cut the spread to 65-61, and his 3-pointer with 40 seconds left in regulation tied it at 69.

The Seminoles have won nine consecutive overtime games, including two this season. Their last OT loss came against Iowa in December 2016.

Florida State: Hamilton said he has heard talk that the league isn't as strong as usual — and figures his team's place in the standings reinforces that perception.

“People say that because we’re not one of the tradition-rich programs — blue bloods or whatever they call them — the fact we’re in this position, something must be wrong,” Hamilton said. "If the same traditionally successful programs are not in the position they’ve always been, the conference must be down.

“I'm not going to tell you what I think about that. I might get fined.”

Miami: The addition of freshman Anthony Walker to the rotation gave the Hurricanes more depth. Walker, who sat out the past two games because Larranaga was unhappy with his effort, played 13 minutes and had three rebounds.

Even so, three Hurricanes played more than 40 minutes.

Seminoles: Return home to play Notre Dame on Saturday. They are 2-3 against the Fighting Irish in the past three years.

Hurricanes: Play Tuesday at Duke, which won 95-62 when the teams met Jan. 4. It was Larranaga’s worst home loss in nine years at Miami.