No Bane for TCU; Newcomers and youth around Samuel, Nembhard 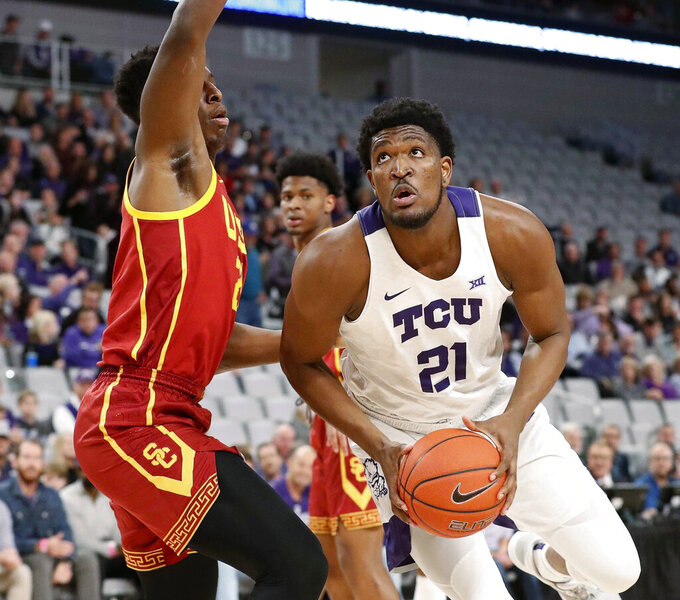 FILE - TCU guard Kevin Samuel (21) looks to the basket as Southern California forward Onyeka Okongwu, left, defends during the first half of an NCAA college basketball game in Fort Worth, Texas, in this Friday, Dec. 6, 2019, file photo. TCU coach Jamie Dixon isn't expecting center Kevin Samuel and guard RJ Nembhard to play more minutes this season. The team's only returning starters just need to be more efficient when on the court. (Bob Booth/Star-Telegram via AP, File)

The 6-foot-11 Samuel and Nembhard will have seven newcomers and four young returning players around them. That comes as the Horned Frogs transition to life without versatile All-Big 12 guard Desmond Bane, who played in 141 games the past four seasons.

“Both on the offensive and the defensive end. Less turnovers, higher shooting percentage offensively. Defensively, more physical, more active,” Dixon said of the junior returning starters. “They’re both guys that can improve, and should improve, and we have to have them improve.”

Nembhard averaged 12.1 points a game while playing more than 32 minutes a game, but shot only 37% from the field. Big man Samuel played 28 1/2 minutes a game while averaging 10 points, 8.4 rebounds and 2.5 blocks a game — the only returning player in the country to reach all of those marks. Only Bane's 36 minutes a game, the second-most in the Big 12, were more for TCU.

TCU finished 16-16, including a loss to Kansas State in the first round of the Big 12 Tournament the day before the coronavirus pandemic shut down the rest of the NCAA season. The Frogs were 7-11 in Big 12 play, but lost nine of their last 12 conference games, even with consecutive home wins over No. 17 West Virginia and No. 2 Baylor at the end of February.

Not surprisingly, the Frogs were picked ninth in the preseason voting of Big 12 coaches. That is still better than last season, when they were expected to be last in the 10-team league but finished tied for seventh for the third time in four years since Dixon returned to his alma mater.

“It's our decision to decide what type of team we want to become as a group, as a team and the commitment we want to make to defending and playing together,” Dixon said. “But I think it’s going to be unlike any other year. So if there’s ever a year where it’s even less important what you’re picked, this will be the year.”

Kevin Easley Jr. was the Southern Conference freshman of the year two seasons ago at Chattanooga, where the 6-7 forward averaged 14.2 points and 6.7 rebounds a game in 2018-19 before transferring to TCU and redshirting last season.

Chuck O’Bannon played in 18 games over 2 1/2 seasons at Southern California. The 6-foot-7 former McDonald’s All-American, the son of former UCLA standout Charles O'Bannon, was hampered by injuries before transferring to TCU last spring.

“They have as much or more experience than anybody on the team, and they haven’t really played a lot,” Dixon said.

“Hopefully he can help in that we can use his story, his path, his growth, as inspiration, as an example for our guys," Dixon said. “We don’t have anybody in that position, to be honest with you, but we’re just going to keep grinding and make all the parts make up for one."

Mickey Pearson Jr., a 6-7 forward, and Taryn Todd, a 6-5 guard, both redshirted as freshmen at TCU last season, though the Frogs will likely be depending on their three highly ranked incoming freshmen this year to play right away. They are Eddie Lampkin, a 6-foot-11 center who weighs in at around 300 pounds, 6-8 forward Terren Frank and 6-1 guard Mike Miles.

The only time the Horned Frogs leave Fort Worth for non-conference play is Thanksgiving weekend for two games in Kansas City vs. Tulsa, and then either South Carolina or Northwestern State. They will go about three miles from campus for a game at Dickie’s Arena against former Southwest Conference rival Texas A&M on Dec. 12, six days after their Big 12 opener on campus against Oklahoma.