No NCAA Tournament, yet lots of memories for top D3 teams 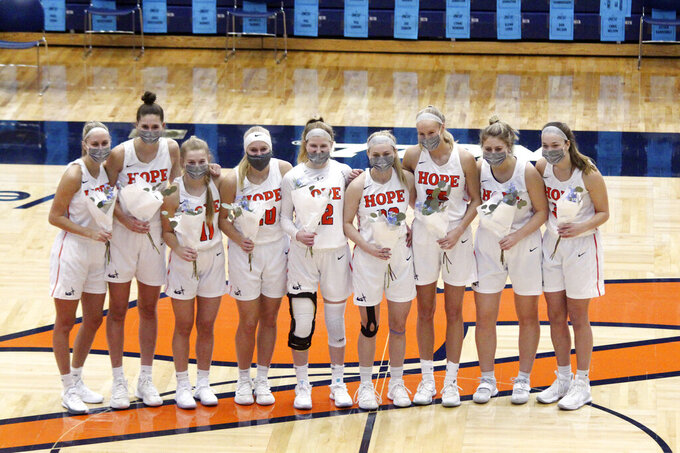 Senior members of the Hope College women's basketball team take the floor as the school honors them during senior day festivities before their final game, Feb. 27, 2021, in Holland, Mich. The ceremony earned the Flying Dutch a technical foul, but it was a tribute to the seniors who were playing their final regular-season game. On Feb. 3, the women's basketball team at Hope beat Trine for its 34th consecutive victory, then found out the bad news. The NCAA had canceled winter championships in Division III, including men's and women's basketball. For a second straight season, the Flying Dutch wouldn't have a chance to compete for a national title. (William Kennedy/The Holland Sentinel via AP) 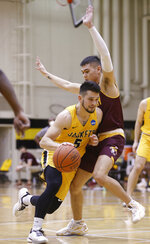 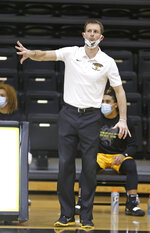 On Feb. 3, the women's basketball team at Hope College in western Michigan beat Trine for its 34th consecutive victory, then found out the bad news. The NCAA had canceled winter championships in Division III, including men's and women's basketball.

For a second straight season, the Flying Dutch wouldn't have a chance to compete for a national title.

“We celebrated the win, but then I had to announce to the team that I had some tough news to share — that the tournament was canceled again," Hope coach Brian Morehouse said. "That was the most difficult locker room I’ve been in in my 25 years as a head coach.”

For much of college basketball, this March has represented a step toward normalcy. The Division I men's and women's tournaments have reached the Final Four, and Division II crowned its champions recently. In Division III, however, the top teams were left without their national tournaments.

They understood they still had plenty left to play for.

Hope extended its winning streak to a school-record 45 games and finished a second straight undefeated season — a remarkable accomplishment with or without a national title.

Randolph-Macon, the top-ranked men's team, went unbeaten as well, and after their conference tournament was done, the Yellow Jackets hosted Trine in one final game that pitted No. 1 vs. No. 2 from the D3hoops.com poll. Randolph-Macon won 69-55.

“We’re definitely not claiming an unofficial (national) championship, because I’ve got too much respect for all the coaches and programs and teams that did not even get a chance to play a game,” Randolph-Macon coach Josh Merkel said. "What it is is, we played a meaningful, relevant game, and we played well, and it was just a great experience.”

The Hope women were in the middle of their NCAA Tournament last year when the rest of the postseason was called off because of the pandemic. It was such a jolt that Morehouse remembers the exact moment — March 12, 2020, at 4:21 p.m.

According to figures released then on NCAA.com, participation levels were at 46.2% in women's basketball and 48.6% in men's basketball — well below the 60% threshold for holding a national championship.

Morehouse said his team could have opted out of the rest of the season, but chose to play on.

“A lot of girls were saying, ‘Practice is the best two, three hours of my day, because I get to come and be with people that I love and play a sport that I love,’" senior guard Kenedy Schoonveld said. "We couldn’t imagine just, like, being done.”

Hope went on to finish 16-0 and ended up atop the D3hoops.com poll for a second straight season. One of this year's most noteworthy moments came on senior day against Kalamazoo College. Morehouse honored his seniors by starting all nine of them in that game, accepting a technical foul for having so many players on the court. It didn't exactly cost the Flying Dutch, who won 101-37.

“We’ve gone through the wringer with COVID these last two years, and so to be able to go out and do that together was something really special and cool for us," Schoonveld said.

Morehouse credited his school's president with investing money for testing, which he described as similar to what Michigan State or other Division I programs would have. At Randolph-Macon, players were supposed to wear masks while practicing, with some situations exempt.

“The time they could drop the masks was 5 on 5, any time we went full speed, but we also had to limit the groups and how long we did that, just in case of tracing," Merkel said.

Merkel said after last year's NCAA Tournament cancellation, his team was a little more prepared for a similar announcement this season. The Yellow Jackets could still focus on competing in the Old Dominion Athletic Conference.

The more immediate problem was that Randolph-Macon athletics went on pause because of the school's virus protocols. The Yellow Jackets didn't have a game from Feb. 3-23.

After returning, Randolph-Macon stayed unbeaten, and the Yellow Jackets won the ODAC Tournament on March 11. Three days later, they had their showdown with Trine.

Randolph-Macon had actually been in talks with Yeshiva about setting up a game, but Randolph-Macon is near Richmond, Virginia, and Yeshiva is in New York, so travel was an issue.

Then Trine coach Brooks Miller reached out with a similar idea — a matchup between No. 1 Randolph-Macon and No. 2 Trine. Miller's team ultimately made the trip from Indiana to Virginia and played the game, which the Yellow Jackets won.

“This is where they get all the credit," Merkel said. "I hate even that the polls dropped them to sixth like they did, because they deserve a lot more credit than they get for being fearless, hopping on a bus, making a 10-hour trip to come play a team that is not only good, but good at home as well.”

It wasn't the same as playing for an actual NCAA title, and sure, that was a little disappointing. Still, the Yellow Jackets can appreciate what they accomplished.

“The hardest thing for me, I know for guys on our team who are hoopers and love competition, is just kind of — it’s been two years now where our season’s ended on a win, and usually it doesn’t end on a win unless you got the big one," said Buzz Anthony, a guard for Randolph-Macon. "It’s been good trying to band together and find different ways to motivate and love the process.”