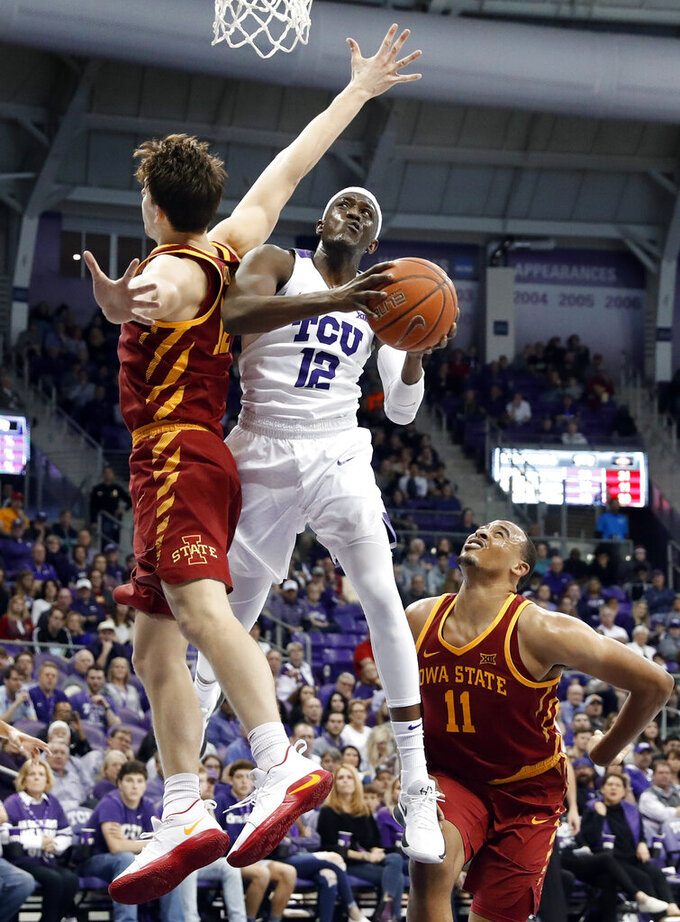 Iowa State forward Michael Jacobson, left, and guard Talen Horton-Tucker (11) defend as TCU forward Kouat Noi (12) of Australia goes up for a shot in the second half of an NCAA college basketball game in Fort Worth, Texas, Saturday, Feb. 23, 2019. (AP Photo/Tony Gutierrez) 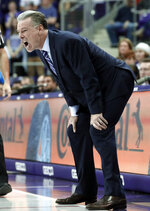 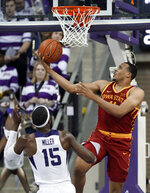 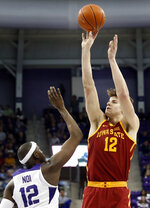 FORT WORTH, Texas (AP) — TCU is a much different team with Kouat Noi on the floor.

Noi was back Saturday after missing two games with a left ankle injury, scoring 20 points with four 3-pointers and grabbing 13 rebounds as TCU ended a three-game losing streak with a 75-72 win over No. 19 Iowa State on Saturday.

"We're certainly not as good a team when we don't have him," coach Jamie Dixon said of the 6-foot-7 sophomore forward.

TCU (18-9, 6-9 Big 12), which had blown a 10-point lead it built before halftime, finally went ahead to stay when Desmond Bane hit a 3-pointer from the left wing with just under two minutes left to snap the eighth and final tie. JD Miller later drove hard for a layup, knocking down one defender without a call and getting fouled by another to make it 73-70 in the final 41 seconds. He missed the free throw.

Alex Robinson also had a double-double with 12 points and 10 rebounds. Miller finished with 17 points and nine rebounds, while Bane scored 16.

Iowa State (19-8, 8-6) was within 73-72 when Marial Shayok found a gap and drove for a layup with 22 seconds left. Noi added two free throws before the Cyclones got to attempt two 3-pointers in the final three seconds, the last after a TCU turnover while the buzzer sounded before a lengthy review that added .4 seconds on the clock.

The Cyclones were only 2-of-20 on 3-pointers, something coach Steve Prohm didn't notice until he was looking at the stat sheet after getting into the postgame news conference.

"At times we were getting good looks, but a couple were rushed, bad shots, and they were running us off the line," said Lindell Wigginton, who had the final desperation shot after the inbound pass.

Talen Horton-Tucker missed a 3-pointer with 3 seconds left. Robinson rebounded the miss, but Horton-Tucker got a steal on the reviewed play.

Noi made a go-ahead 3-pointer with just over six minutes left, and on the next possession Bane made a step-back 3 that put the Frogs up 67-62.

"It's getting better every day. It wasn't bothering me on the court," Noi said of his ankle; he was more concerned with the team performance. "It gives us a lot of confidence. We've just got to keep going, keep getting better."

The Frogs hadn't won since a 92-83 victory at Iowa State two weeks ago, which was their first road win over a ranked team in 21 years.

Michael Jacobsen led Iowa State with 17 points, while Wigginton had 15. Horton-Tucker had 14 points and nine rebounds.

Iowa St.: The Cyclones have lost three of their last four games, and likely ended any chance of winning the Big 12 regular season. ... Shayok, who entered the game second in the Big 12 at 19.1 points per game, was held to four points on 2-of-5 shooting while playing only 16 minutes after getting into early foul trouble.

TCU: The Horned Frogs also ended a three-game home losing streak, a needed boost for their hopes of returning to the NCAA Tournament for the second year in a row after a two-decade absence. They have two road games left against teams that have already beaten this season (West Virginia and Texas) and consecutive home games against Top 25 teams Texas Tech and Kansas State.

This was a victory the Frogs needed, another step in a season when their rotation is down to about seven players because of injuries and transfers.

Iowa State: back home, where it has uncharacteristically lost consecutive games, to play Oklahoma on Monday night.

TCU: on the road to play Tuesday night at West Virginia, which lost by 31 points in Fort Worth earlier this season.