North Carolina gets No. 1 in Midwest, Kansas could await 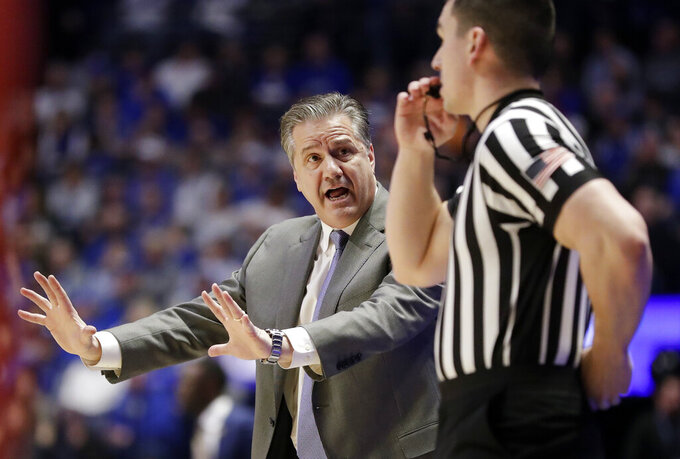 Kentucky head coach John Calipari argues a call in the first half of an NCAA college basketball game against Alabama at the Southeastern Conference tournament Friday, March 15, 2019, in Nashville, Tenn. (AP Photo/Mark Humphrey) 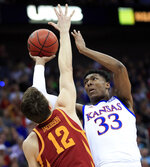 KANSAS CITY, Mo. (AP) — North Carolina was rewarded for navigating one of the nation's toughest schedules, earning the No. 1 seed in the Midwest Region after tying Virginia for the regular-season ACC title and taking Duke down to the wire in their conference tournament.

That's just about the only reward.

The Blue Devils earned the overall No. 1 seed and were given the more preferable East Region, and that means the Tar Heels will be traveling all over the country in the NCAA Tournament. They'll open against MAAC tournament champion Iona on Friday in Columbus, Ohio, and could face eighth-seeded Utah State or ninth-seeded Washington for a spot in the Sweet 16.

Neither of which is an easy task.

The Aggies, led by star guard Sam Merrill, haven't lost since early February after claiming the Mountain West Tournament title. The Huskies were the class of the Pac-12 all season.

If the Tar Heels survive the opening weekend they get a trip to Kansas City, Missouri, just down the road from where coach Roy Williams once led Kansas. And who could await them but the fourth-seeded Jayhawks, who open against Northeastern in Salt Lake City.

Williams has faced the Jayhawks in the NCAA Tournament before, so that's nothing new. But the prospect of facing them in an arena packed with Kansas fans is intriguing.

The Jayhawks should be favored against the Colonial champs, but they could be in for a tough second-round matchup. SEC Tournament champion Auburn, fresh off a romp over Tennessee, is the fifth seed and will face No. 12 seed New Mexico State in the other matchup in Salt Lake City.

The Aggies went 30-4, rolled through the WAC and routed Grand Canyon to win their tournament.

"I think we could have helped ourselves if we won the (Big 12) Tournament, but we didn't," said Jayhawks coach Bill Self, whose team lost to Iowa State on Saturday night. "It's about matchups rather than seeds once you get to the tournament anyway."

The bottom half of the Midwest Region boasts just as much intrigue.

Just as much college basketball pedigree, too.

Kentucky spent much of the season in the discussion for a No. 1 seed, particularly after a win over then-No. 1 Tennessee during conference play. But a narrow loss to the Vols in the SEC Tournament may have dropped the Wildcats a line and into a matchup with Abilene Christian.

If they advance, they would have to face seventh-seeded Wofford — the Southern Conference champ and mid-major darling, currently on a 20-game win streak — or Seton Hall, a team that already topped Kentucky once this season and knocked off Marquette and Villanova, too.

Third-seeded Houston won a school-record 31 games along with its first regular-season conference championship since 1992. The Cougars, who will open against Sun Belt champion Georgia State, will be trying to advance to the Sweet 16 after losing to Michigan in the second round a year ago.

Iowa State packed the Sprint Center during the Big 12 Tournament, and it was that support — even in the finals against nearby Kansas — that helped propel the Cyclones to the championship. They figure to have even more support if they get past Ohio State in the first round and the Houston-Georgia State winner to reach the Sweet 16 for the first time in three years.

"Our fan base, you know, I've been coaching for 20 years at the different levels and went to college in the SEC and this is just different, man," Cyclones coach Steve Prohm said. "I've never seen anything like it. I've watched a ton of games on TV. You look at the fan bases. Our fans support us from November 6 to whenever we finish — and hopefully it's late March, early April."