North Texas comes up big with 78-69 upset over Purdue 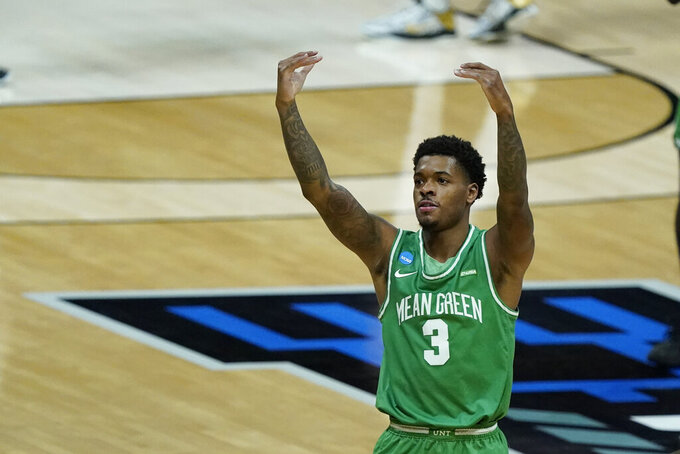 North Texas's Javion Hamlet reacts to fans during the first half of a first-round game against Purdue in the NCAA men's college basketball tournament at Lucas Oil Stadium, Friday, March 19, 2021, in Indianapolis. (AP Photo/Darron Cummings)

INDIANAPOLIS (AP) — To be, or not to be? For an underdog named Javion Hamlet and his group of scrapping North Texas teammates, that was an easy question.

Hamlet scored 24 points and Thomas Bell had 16, along with some game-changing defense in overtime, to lift the 13th-seeded Mean Green to a 78-69 win over No. 4 Purdue on Friday in the NCAA Tournament.

“I’ve been waiting for this opportunity my whole life, just to show the world who Javion Hamlet is,” he said.

He showed everyone, and sparked the second teen-powered upset of the Big Ten on the opening day of the NCAA Tournament. This one came only hours after No. 15 Oral Roberts knocked out Ohio State. No. 12 Oregon State also beat fifth-seeded Tennessee of the SEC on Friday.

What a great prize for Hamlet, and for Bell, each seniors who led the Mean Green (18-9) to a regular-season Conference USA title last year but missed a chance at the tournament when the season was canceled by COVID-19.

They made sure things kept going this time.

Bell opened overtime with a 3, then altered two Purdue shots underneath to help the Mean Green turn the extra session into a laugh. North Texas scored the first 11 points. Mardrez McBride also had 16 for North Texas, which advances to the second round of the tournament for the first time in history.

Though Purdue kept things close all night, the Boilermakers (18-10) didn’t lead once after 3-2 in the opening minutes. They twice had chances to take a one-point lead late, but missed free throws both times. North Texas’ pesky defense held them to 36% from the field.

“You never know what happens when you get out there and scrap,” North Texas coach Grant McCasland said.

Hamlet was at his scrappiest during a pair of sublime 8-0 personal runs, each of which stopped the Purdue momentum in its tracks. The second was a twisting, spinning, dribbling display of big-man play in the paint — the 6-foot-4 guard carving out space against players half a foot (Trevion Williams) and even a foot (Zach Edey) taller than him. It gave North Texas a nine-point lead with 7:45 left.

The Boilermakers scratched back and forced overtime on Williams’ putback with 21 seconds left. Williams finished with 14 points and 13 rebounds.

But it's the team once known as the Eagles, that officially adopted “Mean Green” as its nickname in 2000, that is moving on. The moniker first became a thing when a fired-up cheerleader got creative at a football game in the late-’60s. It was made more popular when Hayden Fry, the folksy ballcoach who went on to greater fame at Iowa, came to the campus in Denton a few years later.

Now, the biggest name on campus is Hamlet.

The 2019-20 Conference USA player of the year made all eight of his free throws and also had 11 rebounds and five assists. His 8-footer with 2:24 left in OT made it a seven-point game and turned the end into a free-throw-shooting contest.

When it ended, Hamlet tossed the ball into the sparsely filled stands at Lucas Oil Stadium, raised his hands above his head and exited, stage right, to the locker room.

Hamlet had a one simple line the Purdue fans on his way out.

"Don’t ever doubt Javion Hamlet,” he told them.

DOING IT FOR MOM

Freshman Jaden Ivey almost single-handedly kept Purdue in the game. He finished with a career-high 26 points while his mom, Notre Dame women’s coach Niele Ivey, watched from the stands. Ivey’s team was on the bubble but did not make the tournament in Texas. “It’s tough,” Jaden said. "North Texas played a hell of a game, got to give credit to them.”

Purdue was the third team to exit from the Big Ten, which placed a nation-leading nine teams in the tournament. Michigan State lost to UCLA in a play-in game.

North Texas moves on to play Friday night’s winner between Winthrop and Villanova.