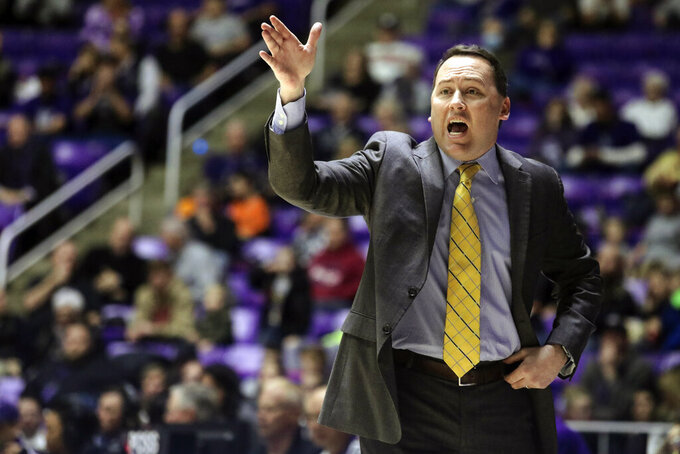 FILE - In this Jan. 4, 2018, file photo, Northern Arizona coach Jack Murphy calls to his team during the first half of an NCAA college basketball game against Weber State, in Ogden, Utah. Northern Arizona won 10 games last season, yet made enough progress for coach Jack Murphy to keep his job for the final year of his contract. He knows the upward trend will have to continue for there to be another contract. (Matt Herp/Standard-Examiner via AP, File)

Murphy knows the upward trend will have to continue if he wants another contract after that.

"Once we sat, we kind of came to an understanding of you're going into the last year of your contract and got to perform," he said. "Not putting any wins or losses or any place in the standings on it, but you just have to perform."

Mired in injuries to key players each of the previous three seasons, the Lumberjacks won five, nine and five games.

An uptick to 10-21 in 2018-19 would hardly seem like progress but it's how Northern Arizona got there that made the difference.

The young Lumberjacks opened the season with two wins in their first three games, but lost their final seven in nonconference.

Once the Big Sky Conference season started, Northern Arizona started coming around, seemingly getting better with every game.

The Lumberjacks quadrupled their conference win total from the year before, finishing 8-12 to finish ninth in the Big Sky. Not great, but they were essentially 12 points from finishing third, losing four games at the buzzer.

The final week of the season showed just how much NAU had progressed.

The Lumberjacks led Montana, a team they lost to by 13 at home earlier, for 28 minutes on the road before losing by two. Next game, Northern Arizona beat Northern Colorado, which was playing for the conference title, by nine in overtime on the road. The Bears won the first meeting by 15 in Flagstaff.

Not bad for a team 325th nationally in experience.

"It showed in both those games on the road how far we'd come against opponents that had beaten us pretty soundly earlier in the season at home," Murphy said. "The youth that we played with, the freshmen and sophomore, couple of juniors, showed they're battletested and ready for next season."

The youth last season should serve the 'Jacks well next season.

NAU will lose five players, but none were significant contributors last season, giving the Lumberjacks eight of their top nine scorers back for next season.

Forward Bernie Andre was one of the Big Sky's best players as a sophomore last season, averaging 13.8 points and 8.5 rebounds, sophomore guard Carlos Hines was second on the team with 12.9 points per game and Luke Avdalovic was one of the nation's top 3-point shooters, hitting 49% from the arc.

Guard Cameron Satterwhite will play next season after sitting out as a transfer from Loyola-Chicago, where he played in the Final Four. Murphy also signed three talented recruits who could contribute right away.

So instead of having plenty of question marks heading into next season, as he has the past few years, Murphy has the kind of roster continuity he had in 2015, a year after the Lumberjacks set a school record with 23 wins.

"I haven't felt this good going into an offseason since coming off my second year going into my third year," Murphy said. "I feel like we're set up to not just have a good one-year run next year, but for sustained success these next couple years."

Keep making progress and Murphy could earn a new contract to watch it all unfold.