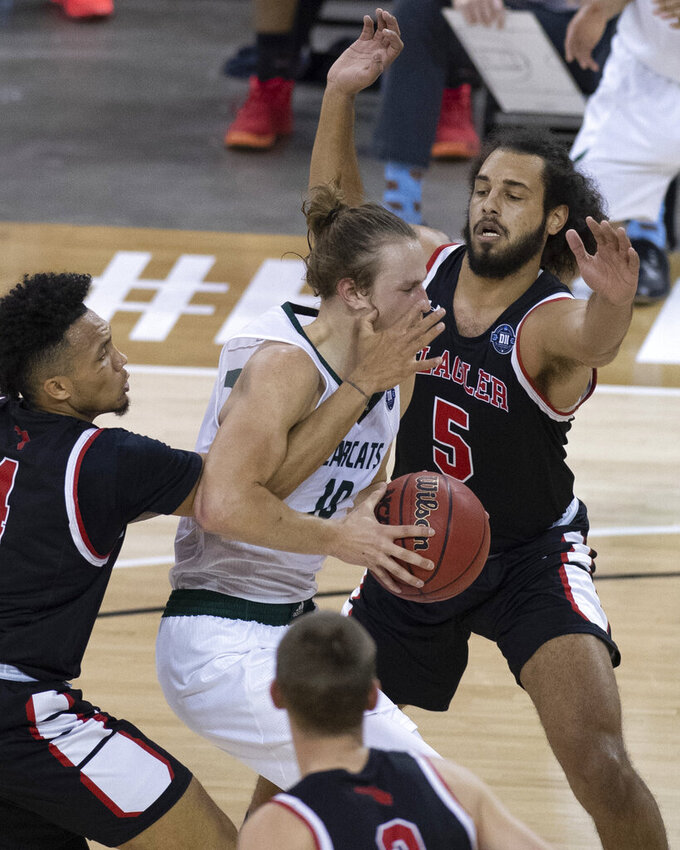 FILE - Northwest Missouri's Wes Dreamer (10) is guarded by Flagler's Jaizec Lottie (4) and Tyler Collier (5) during their semifinal game at the NCAA Division II college basketball game in the Men's Elite Eight at the Ford Center in Evansville, Ind., on Thursday night, March 25, 2021. Northwest Missouri is coming off a record third straight national title and their fourth in the last five NCAA Tournaments. (Denny Simmons/Evansville Courier & Press via AP, File)

MARYVILLE, Mo. (AP) — Ben McCollum was not a popular pick when Northwest Missouri State hired him to lead its men’s basketball team 14 years ago. He was 27 years old and had never been a head coach, and he was being asked to take over a Division II program that had a proud and winning reputation.

The pride is still there. The winning? Well, these days the Bearcats almost never lose.

They are coming off a record third straight national title and their fourth in the last five NCAA tournaments, and they lost just one player from the team that cut down the nets again in March. That one was Trevor Hudgins, who became the first Northwest Missouri State player in the NBA when he signed with the Houston Rockets over the summer.

Not surprisingly, McCollum's phone has been alive the past few years as Division I administrators gauge his interest in moving to college basketball's highest level. And while that time may come, McCollum is clear that it would take the perfect opportunity to pry him away from the dynasty he's built in the small northwest Missouri town of Maryville.

“I'm not the type that's self-promoting. It's just not what I do,” McCollum explained. “I'm not constantly out there searching for the next place to go. If that place comes to find me and it's a match, that's probably how it will end up happening. If I do leave at some point. But the right fit is probably a bigger version of what we have here.”

Good luck finding a bigger program that wins as much as the Bearcats.

They rose to prominence in the 1980s and '90s under Steve Tappmeyer, winning seven conference championships with 10 trips to the NCAA Tournament. But not even Tappmeyer could get the Bearcats to the Elite Eight until a gritty overachiever from Iowa transferred in from a junior college to lead the way.

It was the first time that McCollum led them to new heights.

The second came after a couple of years as a graduate assistant at his alma mater, then five years as an assistant at conference-rival Emporia State. Tappmeyer stepped away in 2009 and Northwest Missouri State turned to the energetic former player to take over, a questionable decision made even more unpopular by two straight losing seasons.

The turnaround came in 2012, when McCollum led the Bearcats to a 22-7 record, won the conference title and reached the first round of the NCAA Tournament. They reached the Sweet 16 two years later, went 35–1 and won their first national title in 2017, then went 38-0 and won their second championship two years later. And after COVID-19 led to the cancellation of the 2020 tournament — the Bearcats were 31-1 at the time — they proceeded to win two more titles.

All told, they've won 17 consecutive NCAA Tournament games and 24 of their past 25, and the only schools to win more Division II national championships are Kentucky Wesleyan with eight and Evansville, now in Division I, with five.

“I don't think people understand the difficulty of handling success vs. handling adversity,” said McCollum, who's won a record five NABC coach of the year awards at his level. “It's excruciatingly difficult to take in the amount of love these guys get for winning a title and come back with humility and do it again.”

It helps that there is continuity within the program. Xavier Kurth was one of the stars of McCollum's first title team and became an assistant coach. Hudgins redshirted as a freshman and played four seasons at Northwest Missouri State. Others have had chances to transfer to Division I schools but have remained loyal to the Bearcats.

“They turned me into the player I am today,” Hudgins said. “All the records I broke and everything else, it's all coach and the players I played with — just how we played, how well we were coached. It made a huge impact on me.”

The Bearcats win despite being in a talent-lean area of the country, though most of their players still come from a relatively small geographic area. And that speaks volumes of the ability of McCollum and his staff to identify underappreciated talent like Hudgins, who received no Division I offers despite growing up in the same town as Kansas State.

On the floor, the Bearcats run perhaps the most efficient offense in college basketball. It's predicated on angles and screens and spacing to get open looks, but there are no discernable patterns. It is a nightmare to defend.

“We just get the right players, and I mean, the coaching staff is a big part of it,” said forward Wes Dreamer, who grew up not far from the University of Nebraska. “Then it comes down to effort in the end, and what Coach Mac is telling us to do.”

There are plenty of examples of Division I schools plucking head coaches from the lower rungs of the sport.

Missouri hired Kim Anderson, fresh off a national title at Central Missouri, to lead its program, though he was fired after just three years. Indiana State recently hired Lincoln coach Josh Shertz, who had taken the Railsplitters to three Final Fours since 2016. And Mount St. Mary's hired Dan Engelstead in 2018 from Southern Vermont, a Division III program, and two years ago he took the Mountaineers to the NCAA Tournament for the first time in school history.

Those three coaches had been Division I assistants, though. McCollum has never worked at that level. So if he does leave Northwest Missouri State, it will probably take an athletic director willing to take a calculated risk, and a considerable leap of faith, in hiring McCollum to lead a program at college basketball's highest level.

Just like administrators did at Northwest Missouri State more than a decade ago.