Northwestern looks to bounce back from 2 losing seasons 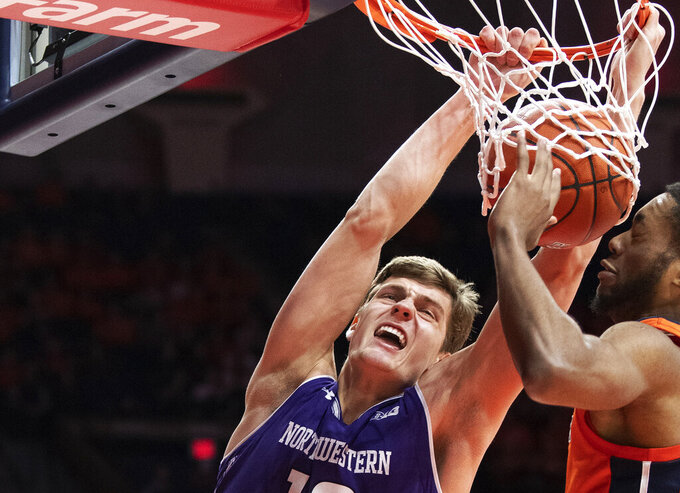 FILE - In this March 3, 2019, file photo, Northwestern forward Miller Kopp, left, dunks the ball against Illinois guard Alan Griffin during the second half of an NCAA college basketball game in Champaign, Ill. Northwestern hopes to find its footing coming off back-to-back losing seasons since the school that hosted the NCAA’s inaugural Final Four made the tournament for the first time. (AP Photo/Stephen Haas, File)

EVANSTON, Ill. (AP) — Northwestern looked like it was ready to go on quite a roll. The Wildcats shed the albatross hanging over the school that hosted the inaugural Final Four by reaching the NCAA Tournament for the first time in 2017.

The Wildcats have posted back-to-back losing records, and they hope to start finding their footing again in their seventh season under coach Chris Collins.

"I feel good about our young talent," said Collins, 101-96 since he was hired in 2013. "I feel like we're on the right track toward our future. But obviously, I understand from afar where expectations can be because you look on paper and there's a lot of unknowns when you look at our roster."

The Wildcats went 15-17 in a buzz-killing 2017-18 season playing home games before sparse crowds about 15 miles from campus at Allstate Arena in Rosemont. And things were no better last year. Back at sparkling, renovated Welsh-Ryan Arena, Northwestern finished 13-19 overall and last in the Big Ten at 4-16.

Nance, whose father Larry was a three-time NBA All-Star and whose brother Larry Jr. plays for the Cleveland Cavaliers, stands 6-foot-10 with a soft outside touch. But he averaged 2.9 points and 1.8 rebounds in a backup role. The 6-7 Kopp made a bigger impact, starting 19 of the 32 games he played in while averaging 4.9 points.

The 6-7 Turner averaged 8.7 points in his first season at Northwestern after transferring from Boston College. But his 3-point percentage dropped from 37.4 to 32.5.

"I think in the beginning of the season, it was a little difficult for me because I didn't play that whole year," Turner said. "Some guys can adjust differently. For me, sitting out that whole year, while I was working out and getting better, you lose things not being in the game. I think it took me a few games to get on my feet. Honestly overall, I was happy with the way I played last year."

Northwestern lost its top three scorers after averaging a league-low 65.9 points (Vic Law, Dererk Pardon and Ryan Taylor). Pardon was also the leading rebounder on a team that ranked among the worst on the glass in the Big Ten.

"I feel like last year, teams really keyed in on Vic and Dererk and the rest of us, we didn't really step up enough to help with the scoring load," Turner said. "We were good defensively, but I think offense was clear."

Northwestern has seven true or redshirt freshmen. But the most interesting addition might be a senior who hasn't played organized basketball since high school: Guard Pat Spencer, a graduate transfer from Loyola (Maryland), was a four-time All-American in lacrosse and is the NCAA Division I career leader in assists (231) and second in points (380).

Spencer got picked first overall in April's Premier Lacrosse League draft last spring. But he opted to play basketball — a sport he starred in at Boys Latin in Maryland — for a year at Northwestern.

"There's a lot of new guys, a lot of youthful excitement, exuberance," Collins said. "I feel good about our young talent. We just have to grow."

After moving back into a renovated arena, Northwestern will have a shiny new practice facility. The $20 million Trienens Performance Center includes practice courts for men's and women's basketball and volleyball, strength and conditioning facilities, meeting rooms and offices among other amenities.

The Wildcats open at home against Merrimack on Nov. 8. They also host Providence on Nov. 13, visit Boston College on Dec. 3 and could face Kansas State or Pittsburgh in the Fort Myers Tip-Off on Nov. 27. Northwestern opens Big Ten play at Purdue on Dec. 8.