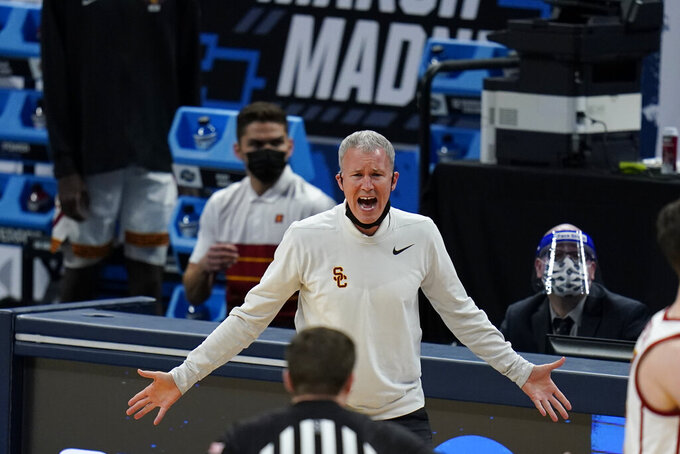 Southern California head coach Andy Enfield reacts to a call during the first half of a Sweet 16 game against Oregon in the NCAA men's college basketball tournament at Bankers Life Fieldhouse, Sunday, March 28, 2021, in Indianapolis. (AP Photo/Jeff Roberson)

INDIANAPOLIS (AP) — Gonzaga has spent its entire season pushing tempo, knocking down shots and rolling to comfortable wins with one of the best offenses college basketball has seen in two decades.

The Zags’ push for perfection hasn’t ignored the other end of the court, either.

The No. 1 overall seed in the NCAA Tournament enters Tuesday's West Region final against Southern California as one of the national leaders in defensive efficiency. And the Zags are coming off a strong performance against Creighton’s outside shooters.

Do they get enough credit for their work on the defensive end?

“I don’t think they do,” coach Mark Few said of his players. “I think we’ve had some excellent, I mean, off-the-chart performances and some terrific halves.”

The Bulldogs (29-0) rank seventh in KenPom’s adjusted efficiency by allowing 88.6 points per 100 possessions. They’ve held opponents below their scoring average in 20 games, including the past six, despite playing a fast tempo.

“We play a lot of really high-possession games so our totals or total points given up is a lot higher than some of the other elite defensive teams in the country,” senior Associated Press first-team all-American Corey Kispert said Monday. “But we think we’re just as good and can go toe-to-toe with any defensive team out there."

Sunday’s 83-65 win against Creighton – which shot 41% and made 5 of 23 3-pointers – marked the seventh time the Zags held an opponent at least 10 points below their average.

“This is not a one-trick pony,” Bluejays coach Greg McDermott said. “These guys can play on both ends of the floor.”

Few credited his players' attention to each scouting report. He also pointed out their perimeter size to go with bigs Drew Timme and Anton Watson being nimble enough to allow effective defensive switches.

The sixth-seeded Trojans (25-7) will test that unit. USC has shot 54.8% in NCAA Tournament wins against Drake, Kansas and Oregon to reach its first Elite Eight in 20 years, including making 21 of 35 3-pointers (60%) against the Jayhawks and Ducks. The matchup of USC's Mobley brothers against the Gonzaga big men will be one to watch.

“All I know is they’re ranked No. 1 in the nation, they’re undefeated,” USC coach Andy Enfield said of Gonzaga’s defense. “I don’t see how you’re being overlooked. We just know they’re an exceptional team at both ends of the floor.”

There's NBA talent in this one.

All three made the AP all-America teams earlier this month.

USC has gotten big tournament results with its zone defense.

Enfield said the team had played man defense about 90% of the season even after installing zone looks in preseason. But the Trojans have used more zone here to keep size in the lineup against teams that spread the court, drive and kick for 3s.

The Trojans have allowed 32% shooting in three NCAA wins.

“You need a basketball IQ and I think our players have developed a comfort level of switching defenses on the fly,” Enfield said, adding: “I think this group has really grown into a cohesive defensive unit where they can make the adjustments quickly.”

The 6-2 guard previously played at Santa Clara and faced the Zags four times, averaging 6.8 points in those losses in 2019 and 2020. He's averaging 13.7 points for the Trojans.

“Kind of in a position where we’re excited to play anybody, prepared to play anybody,” Eaddy said. “But just the fact that it’s Gonzaga, obviously having that history of being in the West Coast Conference, it’s exciting to have the opportunity to play them again.”

Gonzaga is in the Elite Eight for the fourth time in six tournaments and looking for the program’s second trip to the Final Four, the other coming in a 2017 title-game loss to North Carolina.

USC last reached a regional final in 2001, losing to eventual national champion Duke. The Trojans are chasing their third trip to the Final Four and first since 1954.

Gonzaga became the 14th team to stay at No. 1 from start-to-finish in the AP Top 25 this season. The previous 13 made it at least to the national semifinals, with seven going on to win national title – most recently Duke in 1991-92.

UNLV in 1990-91 and Kentucky in 2014-15 were among the six that didn't, going unbeaten until falling in the Final Four. Indiana in 1975-76 remains the last unbeaten national champion.