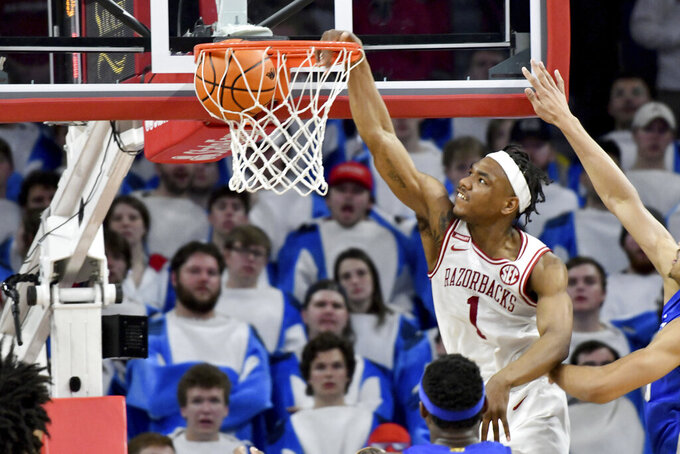 FAYETTEVILLE, Ark. (AP) — JD Notae had 30 points and eight assists, and No. 18 Arkansas topped No. 6 Kentucky 75-73 on Saturday in a matchup of teams peaking late in the season.

Jaylin Williams added 16 points and 12 rebounds as Arkansas (23-6, 12-4) helped create a tie with Kentucky (23-6, 12-4) and Tennessee for second place in the Southeastern Conference with two games to play. The Razorbacks won for the 13th time in their last 14 games.

“What the group has done, they’ve weathered a really, really tough schedule," Arkansas coach Eric Musselman said. “And not only did they kind of weather it, but they dominated it winning basketball games against some incredible teams.”

Notae passed to Williams for a jump shot that lifted Arkansas to a 71-70 lead with 1:22 left. Williams and Davonte Davis each made two free throws to help the Razorbacks hold on down the stretch.

Both teams remain in contention for the regular-season SEC title.

“I think we’re good enough, but we’ve got to keep getting better,” Musselman said. “This place (Bud Walton Arena) is magical when we’re winning.”

Oscar Tshiebwe had 30 points and 18 rebounds for the Wildcats, who lost for the only the second time in their last 10 games. Sahvir Wheeler and Keion Brooks Jr. each scored 14 points.

Arkansas improved to 3-0 against Kentucky at Bud Walton Arena when both teams are ranked (2021-22, ’94-‘95, and ‘92-93). Before Saturday, the last time the Razorbacks had beat Kentucky at BWA was eight years ago during the ‘13-14 season when they swept the ‘Cats with overtime wins in both Fayetteville and Lexington. Coupled with its 81-80 road victory over Kentucky at Rupp Arena last season, Arkansas has notched consecutive victories over the Wildcats for the first time since that ’13-14 campaign.

Arkansas could finish second in the SEC for the second consecutive season. The Razorbacks own the SEC’s best overall record (48-13) and best mark in regular-season league games (24-8) going back to the start of the ’20-21 campaign.

The Wildcats slipped to 3-5 against AP Top 25 teams this season, which includes a 1-5 away-from-home mark. The biggest win of Kentucky’s season remains an 80-62 road victory over then-No. 5 Kansas in the Big 12/SEC Challenge on Jan. 29.

Kentucky: Wraps up the regular season with a home game against Mississippi on Tuesday, followed by a road game at Florida on Saturday.

Arkansas: In their final two SEC games to close out the regular season, the Hogs host LSU on Wednesday before finishing on the road against No. 17 Tennessee on Saturday.