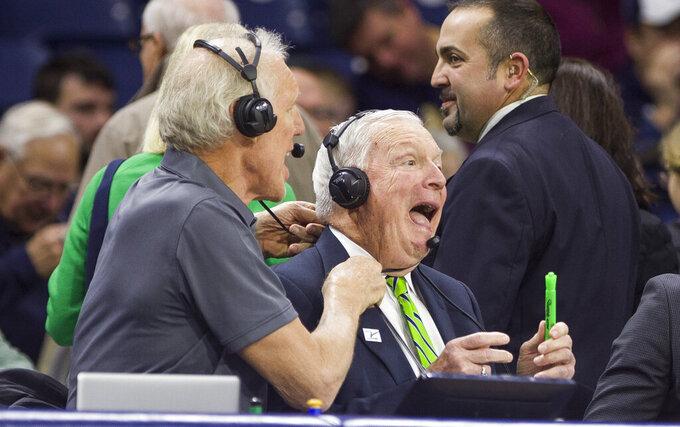 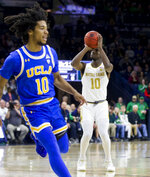 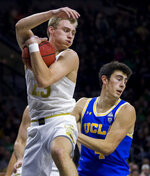 SOUTH BEND, Ind. (AP) — It’s not so much the capable part for Notre Dame from 3-point land, but sometimes the willing part.

On Saturday, the Fighting Irish showed both parts.

“We talked about how we can’t turn down the open shots,” Hubb said after the Irish finished 15 of 39 from long range for 38.5%.

“(Teammate John) Mooney said if you turn down open shots, that’s basically being selfish,” Hubb said, “because we all practice every day, work on our craft. We know each other and know we can hit open shots, so we just have to take those.”

The Bruins (7-4) placed just one player in double digits, that being junior Chris Smith with eight of his 10 in the second half. Redshirt freshman Shareef O’Neal, the son of Shaquille O’Neal, added a team-high 11 rebounds and eight points in just 17 minutes off the bench.

Notre Dame’s Mike Brey, who was coaching his 800th collegiate game, called the willingness of his point guard to shoot a key to the win.

“No question, Prentiss needs to be aggressive and hunt his shot,” Brey said. “Sometimes I think he gets into quarterbacking too much, just being a point guard and not (shooting). … We’ve tried to talk to him about that the last couple days, so hopefully he can build off that.”

The Irish were coming off a record-tying 20 3-pointers in 39 tries during a blowout win over Detroit Mercy on Tuesday.

“Tuesday was some therapy, let’s be honest,” Brey said after his team continued to regain its long-range touch against the Bruins.

“We had some bad breakdowns,” UCLA coach Mick Cronin said of contesting shots. “We had three or four possessions where it’s like, who’s guarding the guy, and that’s our youth and inexperience.”

Cronin, though, pointed to his team’s offense as an even bigger issue.

“Our offense got us beat,” he said after the Bruins hit just 30% from the field in the first half, 35% for the game and 10 of 20 free throws. “You can’t shoot 30% from the field, 50 from the foul line. We would have to play a high school team to win with those numbers.”

“It’s hard to believe,” Cronin said of those numbers. “They were in a rush. They weren’t on balance.”

UCLA: In the only true road game of their pre-conference season, the Bruins again fell flat away from home, not boding well for when they get into Pac-12 play. UCLA is just 1-3 outside Pauley Pavilion, all three losses coming by double digits and two of those to unranked clubs.

Notre Dame: The Irish continued to bounce back from losing gritty guard Robby Carmody to a season-ending knee injury on Dec. 4. Two of Notre Dame’s three losses this season have been on the road against top-10 teams, but the team is also just 0-2 in Atlantic Coast Conference play as the ACC-exclusive part of its season nears.

Though situated on the West Coast, UCLA continues to sport an Indiana flavor, which has been the case during much of its standard-setting history.

Of course, legendary coach John Wooden grew up in Indiana, played at Purdue, taught in South Bend and coached at Indiana State before going on to win 10 national titles in a 12-year span with the Bruins.

The program’s most recent coach before Cronin took over this year was Indiana native Steve Alford.

Despite its four losses, UCLA has outrebounded every one of its 11 opponents this season, standing at plus-8.8 per game.

“That’s an effort stat,” Cronin said. “We can control effort and we try to do that. You’re always happy with that.”

“They got a little too many offensive rebounds today,” Mooney said after the Bruins won that battle 15-9 and the overall board count 48-40, “but those are some big dudes.”

UCLA: The Bruins go a week between games before meeting No. 17 North Carolina next Saturday at the CBS Sports Classic in Las Vegas.

Notre Dame: The Irish also have a week to prepare for their next game, facing Indiana next Saturday at the Crossroads Classic in Indianapolis.