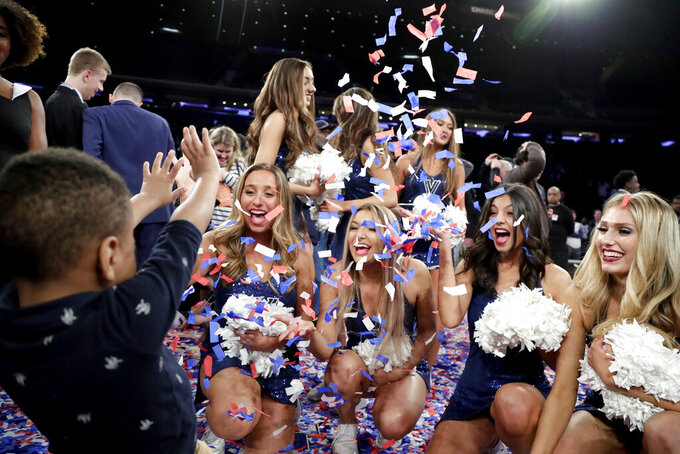 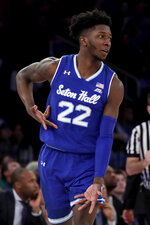 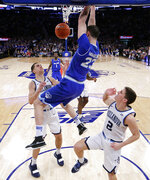 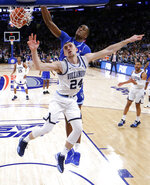 NEW YORK (AP) — Phil Booth entered the New York Knicks' locker room — only the best for the defending champs at Madison Square Garden — wearing a net around his neck. The senior guard stopped at every locker to give each Villanova teammate a hand clap and a bro hug.

Booth has been at Villanova for five years and won two national titles. The Wildcats have played in the last five Big East Tournament championship games, winning four, and Booth has been around for all of it.

This certainly isn't the best team he's been a part of, but it can boast an unprecedented accomplishment.

Seton Hall star Myles Powell, guarded closely by Booth, missed a 3-pointer in the closing seconds that could have won it. Booth was called for traveling as he tried to corral the rebound, however, and the Pirates got one more chance with 0.4 seconds left. Anthony Nelson's long inbounds lob bounced off the backboard and was slapped away by the Wildcats (25-9), who got to party at the Garden yet again.

"This one is special, very special. This team has taught me so much," Booth said during the postgame ceremonies at center court. "These young dudes are like a fresh breath of air for me, being around them."

The young dudes, such as sophomores Jermaine Samuels and Dhamir Cosby-Roundtree and freshman Saddiq Bey, have had to fill big roles this season. Villanova had four players drafted into the NBA off last year's national championship team. Wildcats coach Jay Wright said he has asked as much of Booth and Paschall as any senior leaders he's had at Villanova.

"They really have been like coaches this season," Wright said. "We can do so much on the court, but they've got to take guys in the locker room and teach them how they prepare for practice, how they prepare for games. They've got to teach them how to sleep at night, how to eat the right way. They've been like big brothers, fathers almost to these guys."

Paschall had 17 points and eight rebounds against Seton Hall, and Booth scored 16 and was selected most outstanding player of the 40th Big East Tournament.

Villanova stormed to a national championship last year, wiping out opponent after opponent. This year's team lost three straight games and four of five in February.

"I feel like we're a special team in a different way this year," Paschall said. "We fought through a lot of adversity. Coach challenged us and we accepted that challenge."

And those young dudes that Villanova fans hope will lead the next wave of championships were ready for prime time Saturday night.

The only Big East Tournament loss over the last five years for the Wildcats was to Seton Hall in the 2016 title game, and Powell and the third-seeded Pirates gave Villanova all it could handle once again.

Powell scored 25 points to cap a spectacular three days in Manhattan for the high-scoring guard. He totaled 78 points, but needed three more.

"I thought it was going to drop," Powell said of his last shot.

The Pirates sent Paschall to the line with 13.7 seconds remaining and he made the first and missed the second. Seton Hall rebounded and called a timeout to set up a final play with 8.9 seconds left.

Booth and everybody else at the Garden knew Powell would take the last shot.

"Try to make him take a tough shot, contest it well without fouling him. That's what I tried to do," Booth said.

Seton Hall: The scrappy Pirates will go as far as Powell and a tough defense take them in the NCAA Tournament.

"We know we still have a lot of basketball left," Powell said. "We can play with anybody in the country."

Villanova: If Wright's team is going to make another deep NCAA run, the Wildcats will need more games like this one from the young dudes.

When the Wildcats were finally done with their postgame interviews in the Knicks' locker room, the doors were closed, the hip-hop music got turned way up — and the dancing and hollering started.

Moments later, Wright peeked inside from the hallway.

"I wanna just take a look at this," he said, smiling. "They like each other, man. The old fart that's leading the crew is Booth in there"

Villanova: Will be in the NCAA Tournament for the seventh straight season, but will probably be seeded worse than a 2 for the first time since 2013. Villanova also won the 2016 national title.