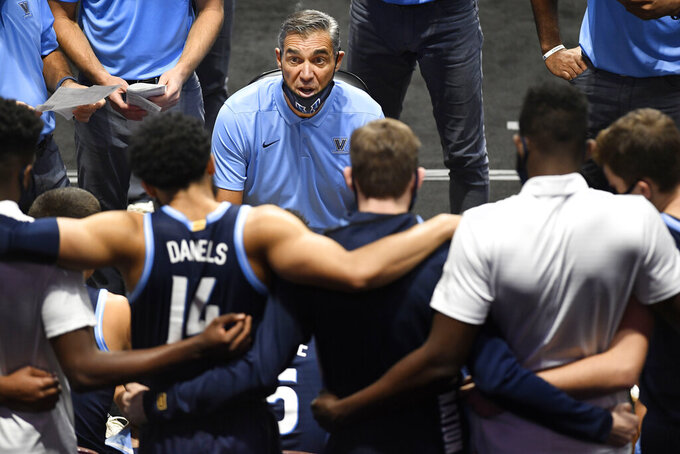 Villanova coach Jay Wright talks to his team during the second half of an NCAA college basketball game against Hartford, Tuesday, Dec. 1, 2020, in Uncasville, Conn. (AP Photo/Jessica Hill)

UNCASVILLE, Conn. (AP) — Villanova stayed in Connecticut's “Bubbleville” at the Mohegan Sun resort casino for a full week, playing four games, including two that were not on it schedule when the Wildcats arrived.

Coach Jay Wright says he's not worried about the physical toll that took on his 12th-ranked team. His players, he said, were in good shape after Tuesday's 87-53 rout of Hartford left them at 3-1.

But the mental struggles, he said, were real.

The coaches and players were basically locked in their hotel rooms for seven days, coming out only to eat, play basketball, get tested for the novel coronavirus and go for one or two walks outside as a group.

“Everything was perfect here,” Wright said. “The rooms, the security, the food was great. It was run extremely professional. But you're inside from Monday (Nov. 23) to Tuesday (Dec. 1). I just really learned the mental impact that has on young guys, especially when they thought they were going to leave twice.”

Junior Brandon Slater was asked what kind of fun the players had in their free time, understanding they were not allowed in the public areas of the resort. He made it clear that this was basically a week-long business trip.

“Really, we've been focused on watching film and spending time with our teammates and coaches and building a bond so that when we're not playing that we understand that we're still a group, we're still together and we're trying to become a better team," he said.

Nobody, Wright said, was allowed to leave their rooms for any reason without a security escort. They used “back-of-the-house” passageways and the guard would stop one team if there was a chance of crossing paths with another team on the way somewhere, ensuring that there was no mingling.

“If I’m on the elevator by myself with our security guard and the elevator opens and another security person or another team member, opponent is out there waiting, they don’t let anybody in the elevator,” he said “They make sure you don’t’ go outside. They have security with you all the time.”

Wright said it gave him a new appreciation for what NBA players went through for several months.

But, it also gave him a sense of security. He said he was confident that because teams were tested when they arrived and tested every day and isolated on their hotel tower floor, that nobody on their team or the opposing team was going to get COVID-19.

That's why he jumped at the opportunity to play fellow “Bubbleville” residents Virginia Tech and later Hartford, when he found out that games in Philadelphia with Saint Joseph's and Temple were being canceled because of positive coronavirus tests on those teams.

In fact, he was working on having the Saint Joseph's game moved from Philadelphia to the Mohegan Sun when it was canceled.

“Philly’s hot, they’re getting infected there, he said. “This is really safe, and it’s really been convenient.”

Wright also sees another benefit. He expects the NCAA Tournament will be held in a similar bubble. His team, he said, will know what to expect. '

But that doesn't mean he or his players want to make a habit of it.

“I would not push them another game,” Wright said. “If we got offered another game, I wouldn't go. They've handled everything great. I think they need a mental break.”