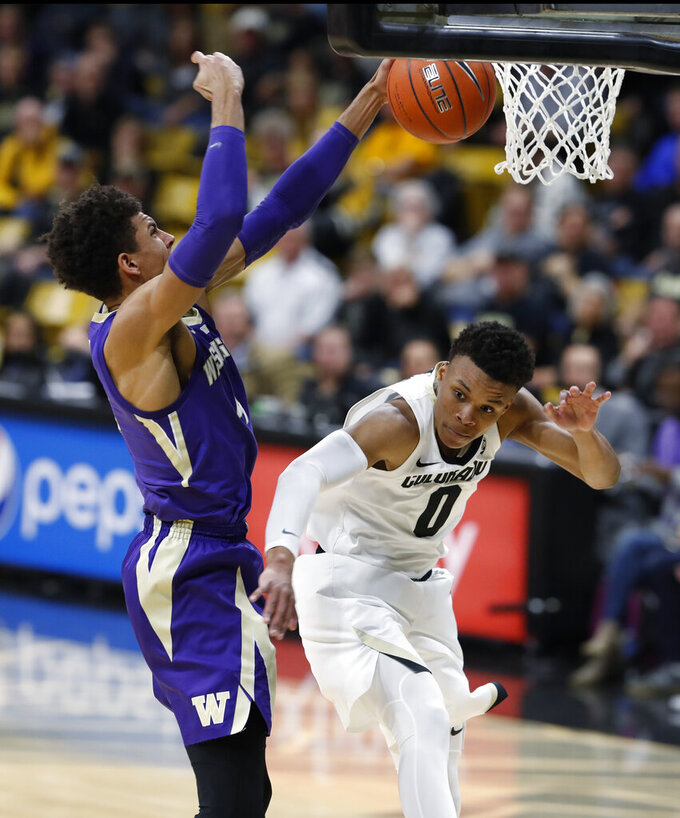 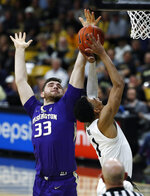 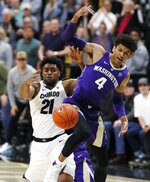 BOULDER, Colo. (AP) — The Washington Huskies players made a promise to each other they would return to Seattle with a road sweep. Jaylen Nowell made good on that pact.

Nowell scored seven of his 19 points down the stretch to help Washington hold off Colorado 77-70 on Saturday night. The Huskies got their first Pac-12 Conference road sweep since 2013 with wins over Utah and the Buffaloes.

"It means everything. Coming in that's what we set out to do," Nowell said. "Before the road trip we came together and promised no matter what we had to come back with two wins and that's what we did."

"We were gritty down the stretch and we made the plays they had to make to win," Washington coach Mike Hopkins said.

The Buffaloes (10-6, 1-3) lost their leading scorer and spark when guard McKinley Wright IV left the game with 8:04 left in the first half. Wright was hit on the left shoulder in the lane and immediately grabbed at the joint. He was looked at by the medical staff and then helped to the locker room. He did not return to the game or the bench.

"McKinley hurt his shoulder in practice after we came back from Christmas, he re-injured it tonight, we don't know how bad," Colorado coach Tad Boyle said. "I do know he's been playing less than 100 percent and he almost didn't play in Arizona."

D'Shawn Schwartz picked up the slack with 22 points, including four 3-pointers - both career highs. Tyler Bey had 15 points and nine rebounds.

The Huskies led by 15 early in the second half and then had to withstand a big Colorado rally. The Buffaloes used a 9-0 run, with Schwartz scoring the first seven, to get to 63-62 with 7:14 left.

Nowell answered with a layup as he and Matisse Thybulle combined to score 13 of Washington's final 14 points. Thybulle was fouled on a 3-point shot and hit all three free throws, and after Daylen Kountz had his layup blocked on the other end, Nowell hit a jumper in the lane with 2:42 left to give the Huskies an eight-point lead.

"We come down and foul a 3-point shooter who we were playing as a driver," Schwartz said of Thybulle. "Frustrating. You can't do that. If he makes it over your hand, he makes it, but you can't put him at the line."

Crisp scored 14 of his 16 points in the first half and needed just six shot attempts to reach it. He was 4 of 5 from 3-point range to help Washington build a 13-point lead at intermission.

He had just two shots in the second half, which Crisp attributed to Colorado's scheme.

"They were trying to make sure they took away the 3 in the second half," Crisp said. "They closed out a lot harder. We had a lot of stuff going off, Jay was starting to go off. Whatever helps us win."

Crisp has scored in double figures in six of the last seven games.

"I'm a bad coach for not getting him more shots in the second half," Hopkins said. "He's shooting at a high clip."

Washington: The Huskies used a big first half to get their first road sweep in six years. Washington hit 63 percent of its shots in the first 20 minutes and never trailed. Now the Huskies have a chance to build on this sweep with home games against Stanford and Cal over the next seven days.

Colorado: Wright going out is a big blow to the Buffaloes. He leads the team in scoring at 13.6 points per game and also averages 5.5 assists and 5.1 rebounds and losing his production is a serious void on a team trying to get into NCAA Tournament position.