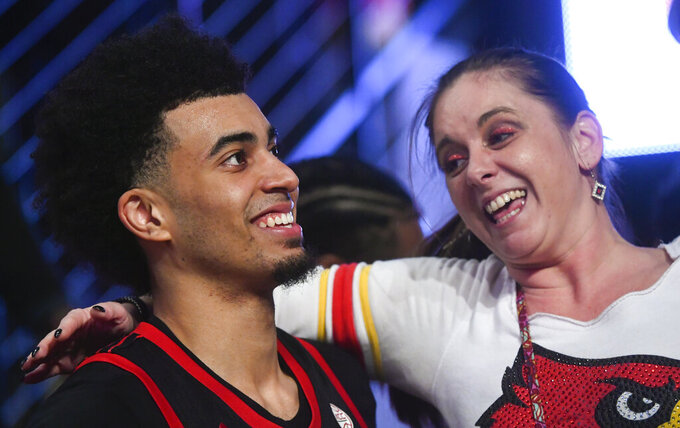 Louisville forward Jordan Nwora is hugged by a fan as he comes off the floor after an NCAA college basketball game against Georgia Tech, Saturday, Jan. 19, 2019 in Atlanta. Louisville won 79-51. (AP Photo/John Amis) 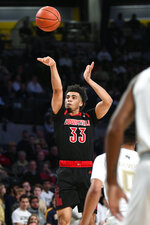 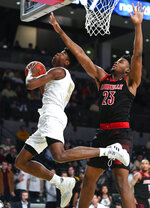 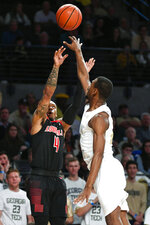 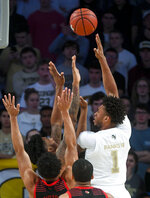 ATLANTA (AP) — It's hardly a surprise any more when Jordan Nwora heats up, like he did Saturday in scoring 25 points to lead Louisville to a 79-51 runaway win over short-handed Georgia Tech, but it was a treat for him and the Cardinals to feel so at home on the road while winning their third straight game.

The sophomore forward entered the game as the Atlantic Coast Conference's most improved scorer, bumping his average from 5.7 points per game as a freshman to 18.1 this season, and he surpassed that with 21 points in the first half Louisville raced to a 43-16 lead.

One week earlier, the Cardinals started their winning streak with a 21-point win at No. 12 North Carolina, and they were more dominant against the Yellow Jackets while building leads of 31 points in the first half and 38 in the second.

Steven Enoch scored 15 points off the bench for the Cardinals and Malik Williams added 13 for Louisville (13-5, 4-1 ACC), whose fans were so loud in McCamish Pavilion that it seemed like the game was being played in Louisville's KFC Yum! Center.

"It was definitely special seeing our fans travel like this," Nwora said after making 10 of 16 shots and adding eight rebounds. "We treat every team the same. We just wanted to play the way we've been playing the last few games . . . I think we have the chance to do something special."

James Banks III paced Tech (10-8, 2-3) with a career-high 24 points and 11 rebounds for his fifth double-double of the season, but he had little help.

Banks scored the game's first bucket, on a baby hook, but Louisville dominated from there beginning with a 14-2 run. "We could not score. We missed some free throws, some layups, had some open-look 3's," said Tech coach Josh Pastner. "This obviously wasn't the first time that's happened to us this year, but we really struggled scoring."

Nwora was in the middle of most everything in the first half. He made three 3-point shots, threw down a dunk and had an old-fashioned 3-point play to give Louisville its biggest lead, 39-8, with 4:38 remaining.

Tech felt way behind quickly for the second straight game. The Jackets trailed 20-2 at Clemson on Wednesday before falling by 12. They turned the ball over on seven of their first 16 possessions and scored just twice while struggling when Louisville double-teamed ball handlers.

"We've had some unexpected injuries, (and) the chemistry and synergy that we've been having in earlier games is being disrupted when it comes to knowing where guys are going to be and what they like to do," Banks said of Tech's discombobulated offense.

The Jackets actually shot 50 percent in the second, when Louisville's Nwora and Williams played sparingly, but made just 1 of 10 3-pointers in the game. Players other than Banks made 10 of 33 shots overall.

Freshman guard Michael Devoe, who handled most of Alvarado's duties, was Tech's second-leading scorer with eight points and two assists.

The Jackets don't have much idea when, or if, they'll get their players back. "Jose, it's obviously going to be up to the medical staff," Pastner said. "With Gueye, same thing. Still unspecified medical condition. When he'll be back? Could be the rest of the season or it could be sometime next week. It's just whenever the medical staff clears him. Brandon is just day-by-day with a personal issue."

TAKE NOTHING FOR GRANTED

Cardinals coach Chris Mack said the Cardinals were not distracted by the absence of Tech's players. "I was pleased with our guys' readiness to play," he said. "We're coaching college guys and they see on Twitter that three players are playing, and you never know what they're thinking. That was the biggest thing."

Louisville: The Cardinals overwhelmed Tech, and their big men did the most damage, especially from beyond the 3-point arc. Center/forward Williams was just as effective in the first half as Nwora (8 of 12) although he shot the ball less. He scored 10 points on 4-of-7 shooting, including 2 of 3 3-point shots.

Georgia Tech: Without Alvarado to run the show, the Jackets were lost offensively and threatened the school record for fewest points scored in a half of an ACC game. Tech scored just 12 points at Virginia on Jan. 22, 2015.

Louisville: Returns home to play No. 17 N.C. State on Thursday and Pittsburgh Saturday.