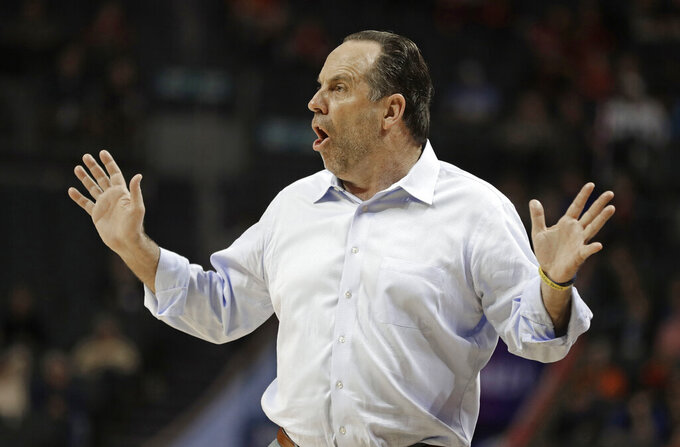 Notre Dame head coach Mike Brey reacts to a call during the first half of an NCAA college basketball game against Louisville in the Atlantic Coast Conference tournament in Charlotte, N.C., Wednesday, March 13, 2019. (AP Photo/Nell Redmond) 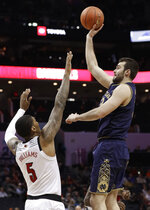 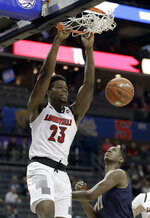 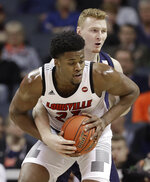 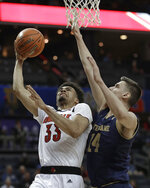 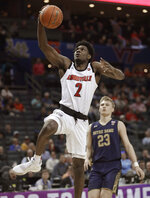 CHARLOTTE, N.C. (AP) — Notre Dame coach Mike Brey said even when it felt like his team got an open shot Wednesday night against Louisville, it really wasn't.

Louisville's length and athleticism was just too bothersome.

"You can talk about well, you didn't shoot well, you didn't make shots — but that's Louisville," Brey said. "They really do guard you. The looks we got, there was somebody athletically closing out all of the time."

Jordan Nwora had 24 points and nine rebounds, and Louisville held Notre to 27 percent — and a paltry 11 percent from 3-point range — as the Cardinals notched their 20th win of the season with a 75-53 win over the Irish in the second round of the Atlantic Coast Conference Tournament.

Ryan McMahon added 12 points and Steven Enoch had 10 for the Cardinals (20-12). The Cardinals broke open a nine-point game at halftime with a 22-7 run early in the second half to build a 24-point lead.

T.J. Gibbs led the Irish (14-19) with 21 points. But the Cardinals doubled down on power forward John Mooney, Notre Dame's leading scorer, and held him to seven points on 3-of-18 shooting.

"Mooney obviously was one of our main focuses coming into the game," Nwora said. "So we were just playing tough and not letting him back down. I don't think length played a big part. I think it was just us being tough in this game and keeping them from getting to the rim."

The seventh-seeded Cardinals wasted no time jumping on the 15th-seeded Irish, bolting to a 28-12 lead behind 12 points from Nwora and a rim-rattling put-back dunk from Enoch — one of many dunks from the high-flying Cardinals. Still, Notre Dame cut the lead to nine at halftime despite missing its final 12 3-point shots of the first half.

The Cardinals almost immediately were forced to turn their attention to Thursday night's game against North Carolina, as coach Chris Mack was peppered with questions about the Tar Heels after the game.

Nate Laszewski returned to the Notre Dame starting lineup after injuring his back and missing the second half of the Irish's first round win over Georgia Tech, but was held scoreless on 0-for-6 shooting from the field. It was pretty clear he wasn't moving as fluidly as he had in the previous game.

Notre Dame: Brey knows this is a rebuilding year for his young team, so he has to be pleased his team won its first round game against Georgia Tech to snap a seven-game skid. But he said strength training will be an important part of the team's offseason program knowing they need to get stronger and more athletic to compete at a high level in the ACC.

Louisville: The Cardinals are looking like a solid lock for the NCAA Tournament. Their length and athleticism will give a lot of teams problems in the postseason.