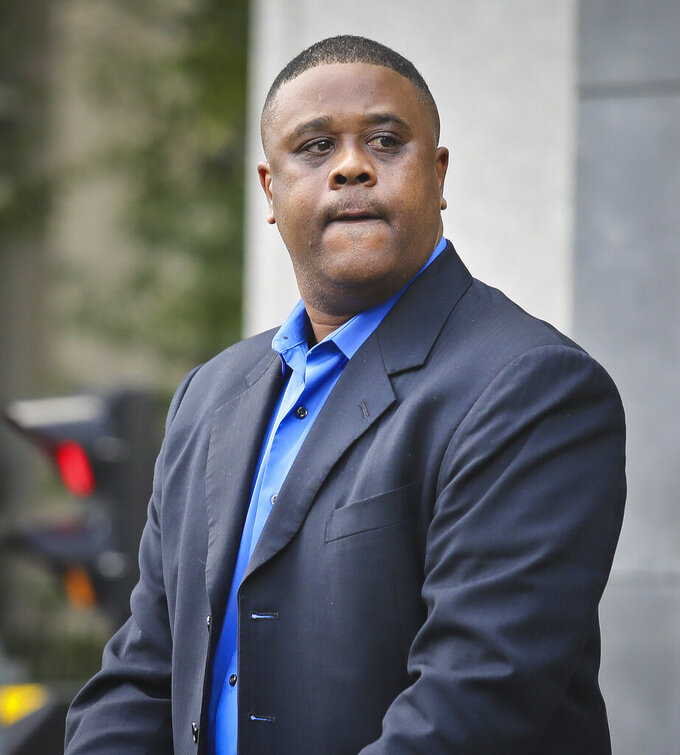 FILE - In this Oct. 24, 2018, file photo, Merl Code leaves federal court in New York. A prosecutor says greed led a fledgling manager of basketball players to bribe college coaches but defense lawyers say it was all an FBI setup. The characterizations came during opening statements Tuesday, April 23, 2019, in the second trial to result from a prosecution that has exposed a seedy side of college basketball recruitment. On trial are business manager Christian Dawkins and ex-amateur league director Merl Code. (AP Photo/Bebeto Matthews, File)

NEW YORK (AP) — A jury began deliberating on Monday at the trial of a business manager and another defendant accused of secretly bribing assistant college basketball coaches.

The deliberations in federal court in Manhattan followed closing arguments by lawyers for Christian Dawkins and youth basketball coach Merl Code, who deny conspiring to pay off coaches from major programs to get help landing NBA-bound players as clients. The jury had heard the government's closings last week.

Jurors ended the day without reaching a verdict. They were to resume deliberating on Tuesday.

The defense has argued that the men were led astray by an informant and undercover agents working for the FBI who posed as investors in Dawkins' management company. Dawkins testified that he pushed back on the fake investors' interest in paying coaches, telling the jury it made no sense because the coaches had little influence about player decisions on who to hire as agents and business managers.

Prosecutors say that the men were caught red-handed paying coaches thousands of dollars. They point to evidence that included images of Dawkins handing the coaches envelopes stuffed with cash at meetings in Las Vegas in 2017.