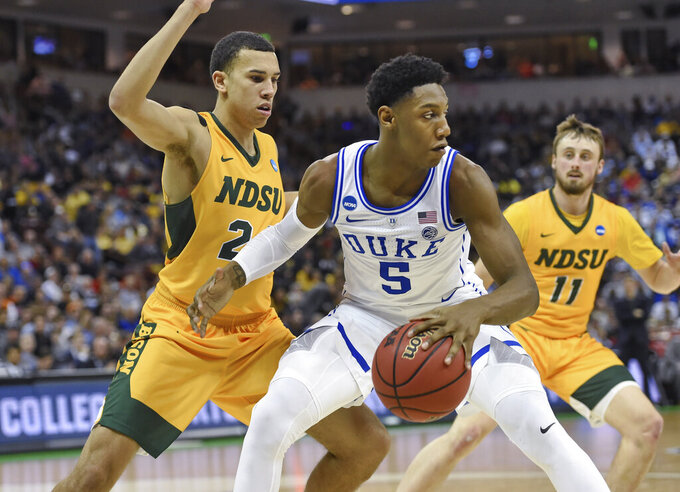 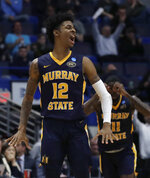 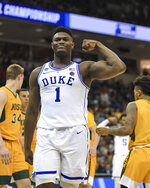 SALT LAKE CITY (AP) — It shouldn't come as a surprise that this spring's NBA draft will feature lots of good players from lots of good college teams.

Or maybe it should.

As the numbers from recent seasons show, the path to the upper reaches of the NBA lottery does not always intersect with the road to the Final Four.

The NCAA Tournament's 64-team bracket has been cut in half, and from Zion Williamson to Ja Morant to RJ Barrett and more, nearly a dozen potential lottery picks are still in the tournament, only one win away from the Sweet 16.

If even half of them make it, they'll way outshine some classes from recent years.

"It's not everybody, but more than usual, which is refreshing," says draft guru Jonathan Givony, who produces mock drafts for ESPN. "I think part of it is a product of, this wasn't considered a great freshman class, and so, a lot of the sophomores, juniors and seniors are just really productive players from really good teams."

Last year, the first eight college players selected in the draft were freshmen. This year, even with Williamson and Barrett in the mix, the number might not even be half that.

But one and done is not a sure measure of college success. The top picks from the last three drafts — Deandre Ayton, Markelle Fultz and Ben Simmons — all left after one season, and didn't win a single game in the tournament. In fact, Ayton was the only one who even played.

Since 2014, only five of the 15 top-three collegiate picks have made it to the second weekend of the tournament.

It adds yet another layer into the ever-evolving debate over what makes a great team, and over how much top-tier players actually benefit from spending a year or two in college.

"Statistically, I can't answer that," said Kansas coach Bill Self, whose top two prospects this season are widely regarded as second-round picks. "But off the top of my head, I would say the tournament certainly enhances it. I would say there have been many times when the tournament hasn't hurt anybody, but it's certainly helped a lot."

Exhibit A: Donte DiVincenzo. The Villanova guard wasn't considered a sure thing to even enter the draft, but not long after a Final Four in which he was named MVP on the strength of a 31-point final, he got picked 17th by the Bucks.

Givony says DiVincenzo's strong Final Four is only part of the story.

"I didn't think that one night where he couldn't miss did it on its own," Givony said. "I don't know if DiVincenzo goes where he did if he didn't go to the NBA combine and perform well there, and also in his other workouts. It's a lot of factors."

But what about the players already camped out at the very top of the draft board?

Some thought Williamson was crazy to return after wrenching his knee when his Nike sneaker blew out during a game against North Carolina last month. The only thing that could prevent him from being the first pick, they said, would be an injury.

Despite the risk, there might have been more to gain by coming back.

"Beyond just the personal enjoyment of being on a team that makes the Final Four, there's a tangible benefit for him off the court, financially, as well," Givony said. "You think about the exposure you get from the Final Four, and that's money right there."

And though Morant was widely considered to be way up there, his triple-double against Marquette on Thursday night practically cemented him in the second spot.

"Not that he needed to do that, but the whole narrative that he only does it against mid-major players, it put that to rest for once and for all," Givony said.

Everyone else — including DeAndre Hunter of Virginia, Cam Reddish from Duke, Nassir Little from North Carolina and Jarrett Culver from Texas Tech — will likely see their stock climb, or fall, depending on how the next few games go

Rui Hachimura of Gonzaga is in the mix, as well. His teammate, Brandon Clarke, whose name is all over the place on a number of different draft boards, might be hoping to emulate another Gonzaga big man.

Two years ago, Zach Collins was a freshman who came into the tournament viewed as unpolished but full of potential. He had 14 points and 13 rebounds in the national semifinal, then battled through foul trouble for 9 points and seven boards in the final. He got drafted 10th.

"Zach played great and solidified himself in a lot of people's eyes," said his coach, Mark Few. "It was what they already thought, but he solidified it. It helps when you advance in the tournament."