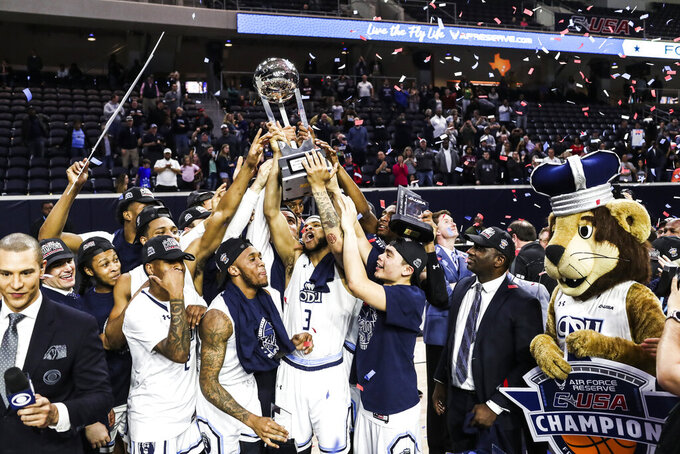 But his players say it did.

Watching him cope with the disease, they say, has helped shape the Monarchs (26-8) into a championship-caliber team and has prepared them for the adversity of facing the South Region's No. 3 seed, Purdue, in the NCAA Tournament on Thursday.

"There were plenty of times we were down and we could have gave up and gave in as a team, but we kept fighting," senior guard Ahmad Caver said. "And (that's) the same thing he's been doing. He keeps fighting and coming in with the same energy. I think his being strong and saying encouraging stuff encouraged us to stay the same way."

The 58-year-old Jones was first diagnosed with prostate cancer in 2015 and underwent surgery and radiation treatment.

Last year, it began growing again and Jones said he knew the symptoms of his treatment would no longer allow him to keep the news private. So, in September he announced the diagnosis to his team and the public.

"I wanted to control the message," he said. "I wanted my players to hear it from me."

He said he also wanted get the word out about the importance of early detection and testing, something the normally private coach realizes the platform of an NCAA Tournament berth allows him to do.

Jones is no stranger to the tournament. He played with Ralph Sampson in the early 1980s at Virginia and led the Cavaliers to five NCAA appearances as their coach in the 1990s. He also led American University to it first NCAA Tournament in 2008.

He became emotional, burying his head in a towel last week after the Monarchs beat Western Kentucky 62-56 in the league championship game. That sent the program into the tournament for the first time since 2011.

"I think there's certainly an element of relief to finally be able to cross that threshold," he said. "And then for me, on a personal note, because at times it has been a tough year, you know, I think it made it even sweeter."

He acknowledges the cancer treatments and the side effects have made for some hard days. But he credits his staff with picking up any slack "if there's a day where maybe I just need to stay home and not come in in the morning. And there haven't been many of those."

His assistants and his players laugh at the idea that the illness may have softened the coach. He still yells, still works long hours, and has remained the same tough, demanding leader through everything, they said.

"To see him fighting makes us want to fight as well," sophomore guard Xavier Green said. "We do it for him. It comes naturally. But if he can do that, we can do this as well."

There have been rumors that because of his health issues, Jones may retire after this season. He said Wednesday that's not going to happen.

"Coaching is not just something I do, that's who I am," he said. "The idea of not coaching, the idea of retirement, that's not even on the radar at this point."