Ohio players get in one last run after MAC tourney canceled 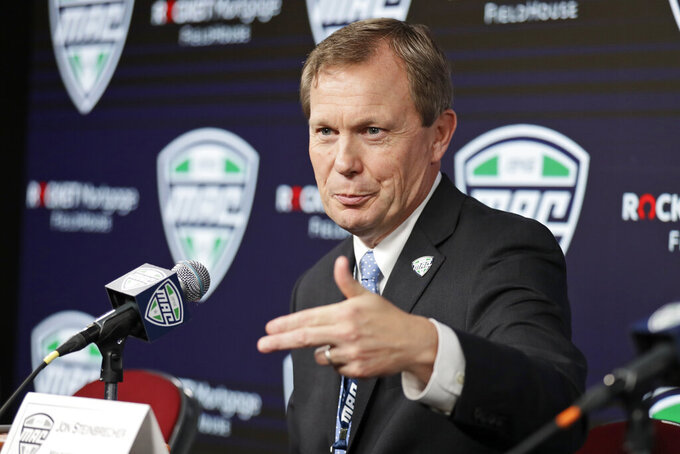 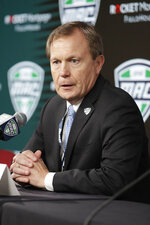 CLEVELAND (AP) — After getting up some pregame shots, Ohio's players excitedly huddled at mid-court just like they have all season.

Game time was an hour away, and as they stood on top of the Mid-American Conference's green-and-blue logo, the eighth-seeded Bobcats, who had been surging in the days leading up to the MAC tournament, braced themselves for what many of them feared.

Their season was over. March madness like no one has seen before.

The Bobcats, though, weren't done. With just a few family members on hand watching from the stands inside an eerily empty Rocket Mortgage FieldHouse, Ohio's kids decided to scrimmage for 10 minutes on an NBA floor that many of them may never see again.

“I thought it was kind of a cool sight to see that they wanted to have some fun and play,” said Boals, who played successful OU teams in the 1990s. "Get a little run in.”

Following decisions made by some of college basketball's major conferences, the MAC canceled its men's and women's tournaments Thursday as concerns grew over the coronavirus pandemic. Earlier this week, the MAC had been the first conference to announce it would hold games without fans.

Commissioner Jon Steinbrecher could not have imagined how quickly things would change.

“It is incredibly disappointing in terms of the kids having a chance to compete further because I know this is a pinnacle event and is something they look forward to,” Steinbrecher said during a hastily arranged news conference. “But simply from a public health standpoint, this seems the appropriate course of action.”

For a long period, it appeared the MAC would play after all. In New York, the Big East started its second-round game between top-seeded Creighton and St. John's at Madison Square Garden before calling it at halftime.

At the MAC, things began to change at around 11:45 a.m., when the arena's public address announcer said the tip-off between Ohio and top-seeded Akron would be delayed by an hour. Within seconds, news broke that the Big Ten and Atlantic Coast Conferences had decided to scrap their postseason tournaments, and seemed inevitable that the MAC would follow suit.

Before speaking to the media, Steinbrecher met with Boals, who had just left Ohio's locker room after his players had their temperatures taken by a doctor to assure they were healthy. The Bobcats were aware that Utah center Rudy Gobert, whose positive test for the virus triggered the NBA suspending its season Wednesday night, had been in Cleveland on March 2 to play the Cavaliers.

Steinbrecher said after consulting with the Cavs and city health officials, the conference was satisfied they were not putting any student-athletes at risk. The arena is set to host NCAA first- and -second-round games next week, but like everything in the sports world, nothing is certain at this point.

Steinbrecher, who has been in contact with the NCAA for days, was distraught over having to cancel the league's shining event. He struggled to find the right words.

“How do I feel? I don't even know how to answer that,” he said, searching during an unprecedented situation. "You know what, you're working the problem, you're working the issue. We're concerned with making sure we do everything possible to mitigate risk factors for our students and for our student-athletes and for our fans and anyone interacting in and around our programs.

When the cancellation became official, Akron junior point guard Loren Cristian Jackson, the league's MVP, phoned his father who was among the sparse group on hand.

The elder Jackson spoke quietly with his son and sensed his deep disappointment.

"Never in my 30 years of coaching have I seen anything like this happen," said Loren Jackson, who coaches at Victory Rock Prep in Bradenton, Florida.

He wasn't alone as everyone tried to grasp a new normal in the sports world.

Boals desperately wanted to see his team get a shot at the top-seeded Zips, who will represent the MAC if the NCAA Tournament is held.

“I’m disappointed from the sense that I thought we could win this thing,” Boals said. "I thought we were playing really well. Our guys were confident. I‘m disappointed for the two seniors who have to go out this way. Not only our seniors, but who knows with Akron’s seniors.

“There might not be an NCAA Tournament. To not get that chance to experience it — I've done it as a player. I’ve done it as a coach. There’s no better feeling. But I think when we look back on this, it was the right call.”