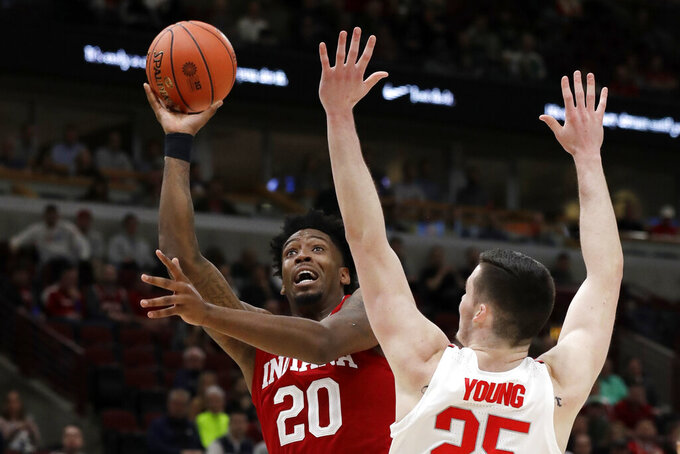 Indiana's De'Ron Davis (20) shoots over Ohio State's Kyle Young (25) during the first half of an NCAA college basketball game in the second round of the Big Ten Conference tournament, Thursday, March 14, 2019, in Chicago. (AP Photo/Nam Y. Huh) 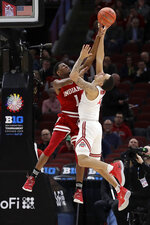 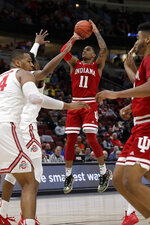 CHICAGO (AP) — Rolling along with a 20-point lead in the second half, Ohio State appeared to be in the clear.

That changed in a flash. But the Buckeyes hung on.

Keyshawn Woods scored 18, Kaleb Wesson added 17 points and a career-high 13 rebounds, and Ohio State beat Indiana 79-75 in the second round of the Big Ten Tournament on Thursday afternoon.

Woods scored a key basket in the closing minute. Wesson provided a big lift inside in his return from a punishment for violating athletic department policy, helping Ohio State stop a three-game losing streak and boost its NCAA Tournament hopes.

C.J. Jackson added 17 points and hit two free throws in the closing seconds to preserve the win for the Buckeyes (19-13) after a 20-point lead in the second half dwindled to two. Ohio State will face No. 6 Michigan State on Friday.

"Everybody here packed for four days," Wesson said. "We want to get the highest seed we can if we do go (to the NCAA). If they don't want to put us in the tournament, that's fine. We're going to go whatever tournament we go to and play."

Devonte Green scored a career-high 26 for Indiana and set a Big Ten Tournament record by nailing 8 of 10 3-pointers. But the Hoosiers (17-15) came up short after winning four in a row to jump into the NCAA picture.

"We'll wait and see," coach Archie Miller said. "It'll be difficult. Our resume, at the end of the day, if you put it up with a blank sketch, I'm sure it compares favorably with other teams. We've played a ridiculous schedule and obviously beat some teams that have made the tournament."

Ohio State lost at Purdue and Northwestern and then at home to Wisconsin with Wesson — their leading scorer and rebounder — suspended. But the Buckeyes got the win they needed even if things got tight down the stretch.

Ohio State scored 10 straight to go up by 20 with just over seven minutes left in the game. The Hoosiers responded with a 13-0 run, cutting it to seven with 4:20 left on De'Ron Davis' layup.

Jackson then nailed a 3 for Ohio State. Indiana kept coming, cutting it to 72-69 on Romeo Langford's layup with just under a minute remaining.

Woods answered with a short pull-up jumper in traffic. Davis had a layup wiped out by an offensive foul against Evan Fitzner, who pushed Kaleb Wesson, and Duane Washington Jr. dunked off a long inbounds to make it 76-69 with 16 seconds left.

Green then hit a 3 for Indiana. And after Andre Wesson made 1 of 2 free throws, Green nailed another 3 from about 30 feet to make it 77-75 with six seconds remaining. But Jackson then hit two free throws to seal the win for Ohio State.

"(Players) start talking about it in I think November. That conversation's been going on for a while, and I think it requires some discipline. And I'm not sure that we've always been great at it. But as much as possible, we just try to focus in on trying to play more possessions of quality basketball than what we did the previous time. Is it hard? Sure. I mean, it's everywhere this time of year. Right? I think our guys did a pretty good job this last week and a half." — Ohio State coach Chris Holtmann on the NCAA bubble talk.

Indiana: The Hoosiers' NCAA hopes took a big hit with the loss.

Ohio State: With Kaleb Wesson back in the lineup, the Buckeyes got the win they needed to strengthen their case for an NCAA bid.

Indiana: The Hoosiers will wait to find out if they're in the NCAA Tournament.

Ohio State: The Buckeyes got swept by Michigan State, losing Jan. 5 at home and Feb. 17 on the road.