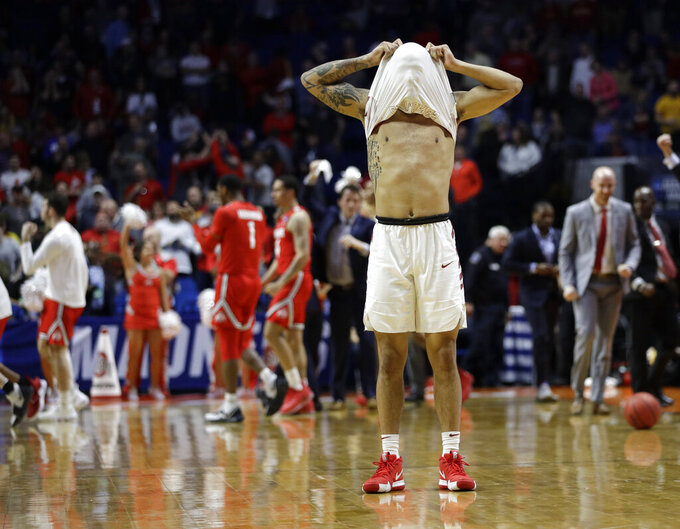 TULSA, Okla. (AP) — Ohio State went from barely making the NCAA Tournament to a spot in the second round.

Kaleb Wesson had 21 points and 12 rebounds to lead the 11th-seeded Buckeyes to a 62-59 upset of sixth-seeded Iowa State in the Midwest Region on Friday night.

Iowa State (23-12) led just once in the second half but had a chance to send the game into overtime when Nick Weiler-Babb had an open attempt at a game-tying 3. His shot missed and ended the season for the Cyclones, who won the Big 12 Tournament to earn a spot in the NCAAs.

"We just weren't good enough tonight," Iowa State coach Steve Prohm said. "We still had opportunities down the stretch. We couldn't get it done. I hate it for these guys because the finale came a lot quicker than I was thinking. I really thought we had a chance to do something."

Ohio State led 26-24 at halftime and started to gain momentum in the early minutes of the second half. Woods threw up a lob to Jallow for a dunk that put the Buckeyes up 38-32 with 14 minutes to play.

Iowa State caught a much-needed break when Wigginton was fouled on a 3-pointer. He made the free throw to cut Ohio State's lead to 44-42. Shayok's mid-range jumper finally put Iowa State up 54-53, but Ohio State answered quickly. Woods' corner 3 put the Buckeyes up 58-54.

Wesson missed a free throw with Ohio State up three and 10 seconds remaining to set up the final sequence.

"They came more focused than us tonight," Iowa State forward Cameron Lard said. "We didn't buy into the details the coach was telling us of not giving easy angles and all the little things."

Ohio State: The Buckeyes slowed the game down and turned it into a Big Ten-style bruise fest. They'll need to again try and control the tempo against a Houston squad that entered the tournament averaging 76 points per game.

Iowa State: The Cyclones fell back into some of their inconsistency — they lost three straight heading into the Big 12 Tournament before winning it. It's a disappointing finish for a team that started the season 12-2.

Ohio State used its power to outrebound the Cyclones 38-31.

The officials were lenient, which played into the hands of Ohio State's 6-foot-9, 270-pound Wesson.

"Kaleb was tremendous in terms of imposing himself," Holtmann said. "I thought that was so important for that to happen, really throughout the game. If he didn't impose himself physically, I thought we could really struggle, just to keep pace, as high-octane as they are."