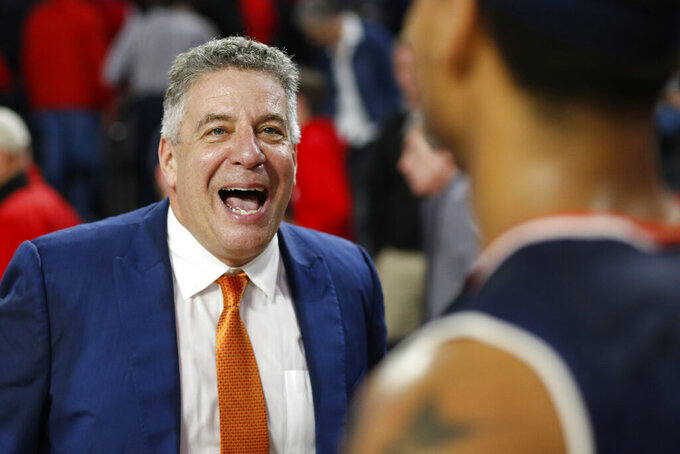 Auburn coach Bruce Pearl celebrates with the team after a win over Georgia during an NCAA college basketball game Wednesday, Feb. 27, 2019, in Athens, Ga. (Joshua L. Jones/Athens Banner-Herald via AP) 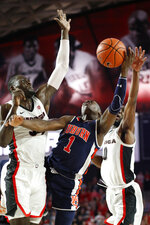 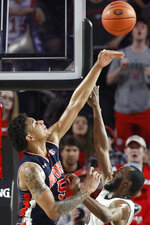 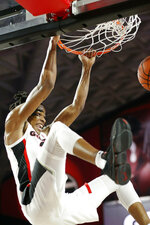 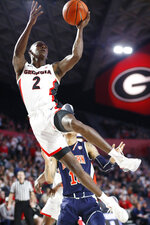 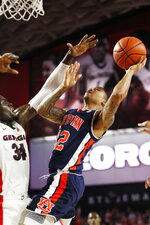 ATHENS, Ga. (AP) — Inbounding the ball from the baseline with hardly any time left on the shot clock, Auburn didn't have a lot of options.

So, the Tigers threw it up to Chuma Okeke and hoped for the best.

The sophomore forward came through.

Okeke hit the winning 3-pointer with 26 seconds remaining and Auburn held on for a 78-75 victory over Georgia, handing the Bulldogs their 13th straight Southeastern Conference loss on Wednesday night.

"I did not realize how far behind the line I was," Okeke said.

Georgia's Nicolas Claxton tied the game at 75 on a 3-pointer from the top of the key with 54 seconds to go. With the crowd roaring, Georgia buckled down at the defensive end, blocking two straight Auburn shots.

The Tigers retained possession both times, calling timeout with three seconds left on the shot clock to set up a play off an inbounds pass. It wasn't very imaginative — Samir Doughty lofted a pass over Okeke's head out beyond the arc — but it worked out just fine.

The 6-foot-8 Okeke turned and hit a fade-away jumper with a hand in his face.

"It's kind of a no-brainer with 3 seconds to shoot. It's a one-touch possession," Auburn coach Bruce Pearl said. "We wanted size on the catch. A player like Chuma can look over a smaller player and get a quick look. He could rip and go to the basket, but I told him if he liked the catch to shoot it."

Georgia had time to get a quick basket underneath to extend the game, but the Bulldogs ran down the clock trying to get a good look at a tying 3. They wound up taking a desperation heave at the buzzer that didn't hit anything.

"When you're in the pressure of the moment, down 3, most 21-year-old guys are going to try to answer with a 3," said Jordan Harris, who led Georgia with a career-high 18 points. "The smart thing probably would have been to go inside, but we tried to go for the 3. I'm not saying it was a bad idea, but we could've done something better."

Auburn (19-9, 8-7 SEC) bounced back from a 27-point loss at Kentucky to add a much-needed victory to its postseason resume.

It was another heartbreaking loss in a dismal debut season for Crean. The Bulldogs (10-18, 1-14) rallied from a 14-point deficit only to lose their ninth straight overall — the last four by a total of nine points.

"We've done a tremendous job of coming back in these games," Crean said. "But we've got to do a better job in the middle and beginning."

After trailing 50-40 at the half, Georgia ripped off a 13-0 spurt that was highlighted by some ferocious work on the boards. After grabbing three straight offensive rebounds, the Bulldogs finally scored when E'Torrion Wilridge laid one in on the fourth shot of the possession.

Derek Ogbeide capped the run with a shot that put Georgia ahead 58-57 — its first lead since early in the opening period.

The teams went back and forth after that, the lead changing hands seven times in the next five minutes.

Auburn: The Tigers desperately needed a victory after last Saturday's debacle in Lexington, and strong work on the offensive boards helped them get it. Even though Georgia held a 31-28 edge in overall rebounds, Auburn pulled down 13 at the offensive end and finished with a commanding 19-4 edge in second-chance points.

Georgia: The Bulldogs extended their school record for consecutive SEC losses and matched their most defeats in conference play since going 2-14 in 2004-05. With two of their last three regular-season games on the road, the Bulldogs are making a run at the worst SEC record in school history — a 2-16 mark in 1973-74.

Both teams were missing key players.

Auburn's Malik Dunbar warmed up but couldn't go because of a strained abdominal muscle, while teammate Austin Wiley didn't make the trip because of an injured right leg. The Tigers used only eight players.

Georgia had to go without its second-leading scorer. Forward Rayshaun Hammonds was wearing a walking boot after hurting his right foot in Saturday's loss to Ole Miss.

Georgia: Hits the road to take on Florida on Saturday.