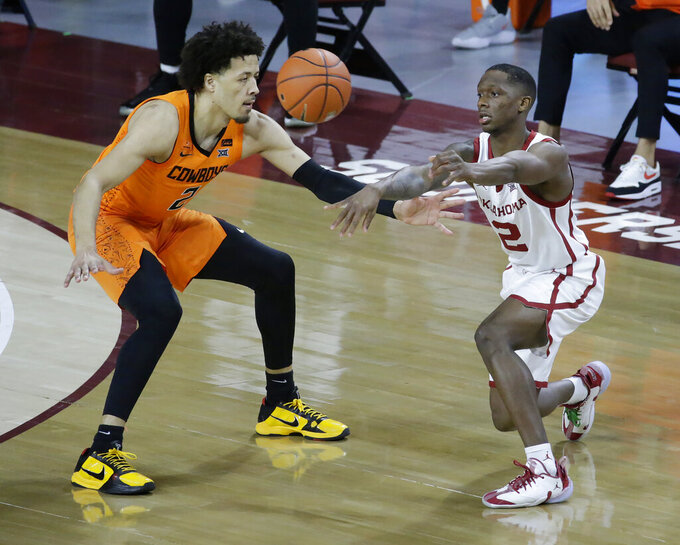 Oklahoma State's star freshman was coming off a 40-point performance in an overtime win at Oklahoma last Saturday and fans anticipated an encore in a rematch two nights later.

Instead, the 6-foot-8 point guard went nearly 33 minutes into the game without a field goal.

When he turned it on, everything changed. His only three baskets came during a two-minute span that turned a five-point deficit into a three-point lead. He scored 13 of his 15 points in the final 10 minutes, and the Cowboys won 79-75.

Cunningham’s grasp of how to be most effective is the main reason Oklahoma State is one of the nation’s hottest teams. The 17th-ranked Cowboys have won five straight heading into Thursday’s game against No. 3 Baylor, including three in a row against Top 25 teams.

“I think earlier on in the year, whenever I felt like it was my turn, I would kind of force it a little bit more and kind of force my looks, especially if I had been passive earlier,” Cunningham said. “I think now after some time and just building chemistry with the team, getting more comfortable on the court, things like that, I feel like it’s now more of what I see each play. I’m playing with more pure intentions of just trying to find the right play, whereas earlier, I would kind of predetermine things probably in my head a little more than I needed to.”

Cunningham’s physical tools are impressive and the star from Arlington, Texas, has an NBA-ready frame at age 19.

Now, his brain has caught up. After he made 12 of 21 field goals and 13 of 14 free throws in the first game against Oklahoma, Oklahoma State coach Mike Boynton said the race to determine the top pick in this year's NBA draft should be over.

During the five-game streak, he's done his damage different ways. He scored 12 of his 15 points in the second half against Kansas State, 27 points after halftime against Oklahoma in the first matchup and 13 of his 15 in the second half in the rematch against the Sooners.

Other times, he backs off. He took just four shots in the second half of a win over Iowa State. In a home game against Texas Tech, he scored 15 points in the first half, then his teammates carried much of the scoring load after the break in a 74-69 overtime win.

“Cade just takes the pressure off the rest of us,” guard Bryce Williams said. “He’s got so much pressure on him, but it’s not really pressure to him. He can handle the situation. But he’s got a team behind him that can back him up every day.”

Six players average at least 8.0 points per game and the chemistry Cunningham referred to is obvious off the court, too. He has been part of the group from the beginning, often trying to deflect the attention he receives, and he stayed with the Cowboys even after the NCAA announced a postseason ban for the program that is on hold pending appeal.

“He didn’t walk in as, ‘These guys aren’t good enough, I’m here to save the day,’” Boynton said. “It was, ‘I believe in what is already there and I believe in myself in my ability to help enhance that, and everybody can eat, so to speak.’”

Cunningham enjoyed hearing the fans when he was introduced before the Cowboys' final home game -- his name was called with the seniors because he will be leaving for the NBA. And he seemed like just one of the guys during the postgame celebration. Those moments are part of why he isn’t as obsessed with the future as some fans and experts.

“I’m not in the NBA yet,” he said. “I’m not getting paid by any team, I’m not under -- my rights as a player are not under any (NBA) team. I’m an OSU Cowboy. That’s what I’m worried about. I’m with my team every day trying to get better with them. I’m not going to be a foot out the door. I still want to win games. I still love being around my teammates now.”