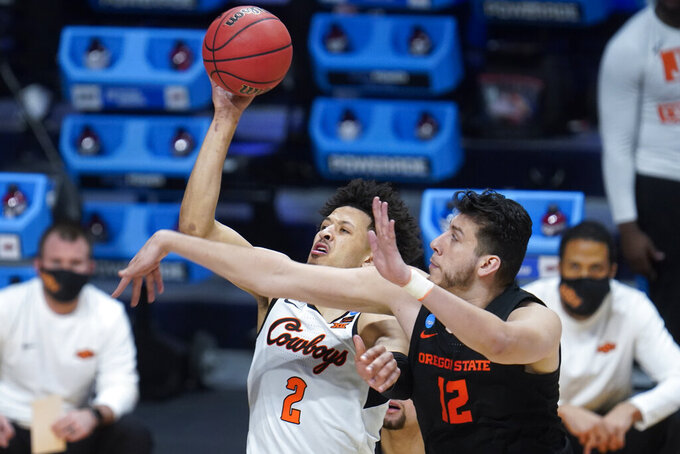 Oklahoma State guard Cade Cunningham (2) shoots on Oregon State center Roman Silva (12) during the second half of a men's college basketball game in the second round of the NCAA tournament at Hinkle Fieldhouse in Indianapolis, Sunday, March 21, 2021. (AP Photo/Paul Sancya) 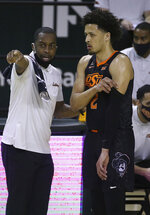 Now, he sees opponents. They soon will see him, too.

Cunningham announced Thursday that he will enter the NBA draft after a dynamic freshman season for Oklahoma State that saw him named a first-team AP All-American.

“I see them as more human now than I used to,” he said. “I’ve been looking at those guys since I was a sophomore in high school. Those are the guys I’ve got to try to outwork right now.”

The 6-foot-8 point guard is expected to be a high pick — possibly No. 1 overall. His decision was no surprise -- the 19-year-old Cunningham participated in Senior Night activities before the Cowboys faced Oklahoma in Stillwater.

But even after Oklahoma State's NCAA Tournament loss to Oregon State, Cunningham wouldn't fully commit either way, deflecting a question about his future while hinting he was ready to move on. He finally made his declaration in a news conference at Gallagher-Iba Arena with coach Mike Boynton by his side and his teammates seated in the courtside bleachers.

“It’s hard to make that decision in the moment, so I just wanted to wait until my head was level," he said. "But I was just blessed to have that opportunity to be able to enter the draft. I felt like I had did a lot of the work early to be in that position.”

Boynton said that versatility should serve Cunningham well as a pro.

“He’s unique in that I don’t think you can have a roster that he couldn’t fit in because he’s able to play with any type of other player," Boynton said. "I think he fits regardless of what your roster looks like because his versatility allows you to play another point guard with him, play him at the point, he can post up, which we’ve shown this year, he can be a shooter. That totality of skills is what makes him, I think, a super high value for any NBA franchise out there.”

Cunningham often saved his best moments for late-game surges. In his most dynamic performance, he scored 10 of his 40 points in overtime to help the Cowboys win at rival Oklahoma. He finished his college career by scoring 24 points in Oklahoma State’s 80-70 loss to Oregon State in the second round of the NCAA Tournament.

Kyle Boone, a college basketball writer who helps compile CBS Sports’ mock draft, said Cunningham is the top prospect. He said there will chatter about USC's Evan Mobley, Gonzaga's Jalen Suggs and the NBA's G-League's Jalen Green. But he said Cunningham is at the top.

“There are a lot of players in this draft who are impressive, but don’t overthink it," Boone said. "Cade’s 6-foot-8. He’s a point guard. ... The high IQ that he has — he’s clearly the number one prospect in this draft. By the end of this, I think we’re going to see that Cade is clearly the top guy on NBA teams’ big boards.”

Cunningham knows the work is just beginning. The Texas native already been thinking of ways to improve before the July 29 draft date.

“Throughout the season, I was just adding things on in my head,” he said. “We don’t have as much time to just get in the gym and work. I definitely want to get my fluidity and my movement better, whether that’s yoga and things like that. Just getting my range of motion and things a lot better. I still want to focus on tightening my handle, shooting the ball better, just getting more consistent at a lot of the things that I do now.”