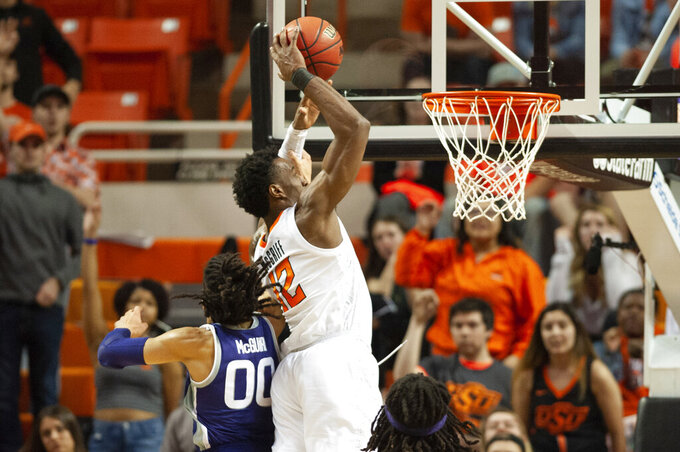 STILLWATER, Okla. (AP) — Oklahoma State struggled earlier in the season and managed to turn its season around, but Kansas State is still in the midst of a long, difficult stretch. With the teams engaged in a tight battle late in the second half, it was Oklahoma State that managed to emerge victorious.

Cameron McGriff scored 14 points and had five rebounds to help lead the Cowboys to a 69-63 victory over Kansas State on Wednesday night.

Thomas Dziagwa scored 11 points and Isaac Likekele had nine points, 10 rebounds, five assists and four steals for Oklahoma State (16-14, 6-11 Big 12). The Cowboys, who had seven players with seven or more points, won their fifth straight home game and six of their last nine overall following a stretch in which they went 1-8.

“Not a thing of beauty, by any means,” said OSU coach Mike Boynton. “Proud of our kids, we’ve fought through a pretty tough stretch this year and they’ve responded like champions, and played like it mattered to put on that jersey every day. It’s another step in the right direction as we build the program to be a high-level contender again.”

“We knew it would be a hard-fought game,” said Kansas State coach Bruce Weber. “Guys gave us their all. They gave us a chance, but just can’t get over the hump. It’s hard. I don’t know if I have much emotion left, I’ll be honest. And the other thing is, we’re right there (losing a lot of close games), so that even makes it even more, it takes the emotion out of you.”

After Oklahoma State turned a 26-23 halftime advantage to a six-point lead early in the second half, Kansas State used a 15-5 run to pull ahead 48-44 with 10:17 left. But the Cowboys responded with an 18-3 run of their own over the next six-plus minutes to regain the lead and take control of the contest.

“Just sticking to the game plan,” McGriff said of the key to locking down the win late. “We knew after a while, our defense would wear them down in a way. Definitely, we had to make some adjustments in the second half, and we just tightened things up on offense and we were able to turn it around.”

Sneed’s 3-pointer from the right corner pulled K-State back to within 67-63 with 40 seconds remaining, but that was as close as the Wildcats would get.

Kansas State: Despite their abysmal Big 12 record, the Wildcats have been in a lot of close games and this one was no different. Over their 10-game losing streak, K-State has lost seven by 10 points or less, including a disappointing 62-58 defeat to No. 1 Kansas on Saturday and a 73-67 loss to then-No. 1 Baylor on Feb. 3. Overall, they have lost 12 games by single digits, Kansas State’s most in a season since they had 13 in 2002-03. This one was close throughout, with six lead changes and six ties through the first half as Oklahoma State took a 26-23 lead into halftime.

Oklahoma State: After a terrible 0-8 start to their Big 12 schedule, the Cowboys are in the midst of finishing the regular season solidly. Oklahoma State will still probably end up the Big 12’s No. 8 seed for the post-season tournament next week, likely facing Iowa State in the No. 9 slot. Part of the reason for the resurgence has been the improved play of McGriff, who has hit double digits in each of the last 11 contests, averaging 15.5 points and 7.1 rebounds per game over that span.

Oklahoma State turned the ball over nine times within the game’s first 10 minutes and ended up with 21 overall, matching their season-high. … After Kansas State had just three free throw attempts and the Cowboys five in the first half, the teams combined for 40 attempts in the second half (K-State with 18, OSU with 22). … The teams each had 33 rebounds, with the Wildcats snagging 15 offensive boards and a 19-17 edge in the second half. … Oklahoma State was 7 for 20 from 3-point range, their most attempts from beyond the arc since Jan. 21, a span of 13 games.

“We just got back to being us,” Likekele said of the Cowboys’ recent turnaround. “Unfortunately, those first eight (Big 12 losses), that wasn’t us at all. Every night, we just weren’t playing like ourselves. We just kept looking back at the drawing board and we never stopped working, and eventually, we knew things were going to work.”

Kansas State: The Wildcats complete their disappointing regular season at home on Saturday against Iowa State.

Oklahoma State: The Cowboys finish the Big 12 regular season on the road on Saturday at Texas, which has won five in a row.