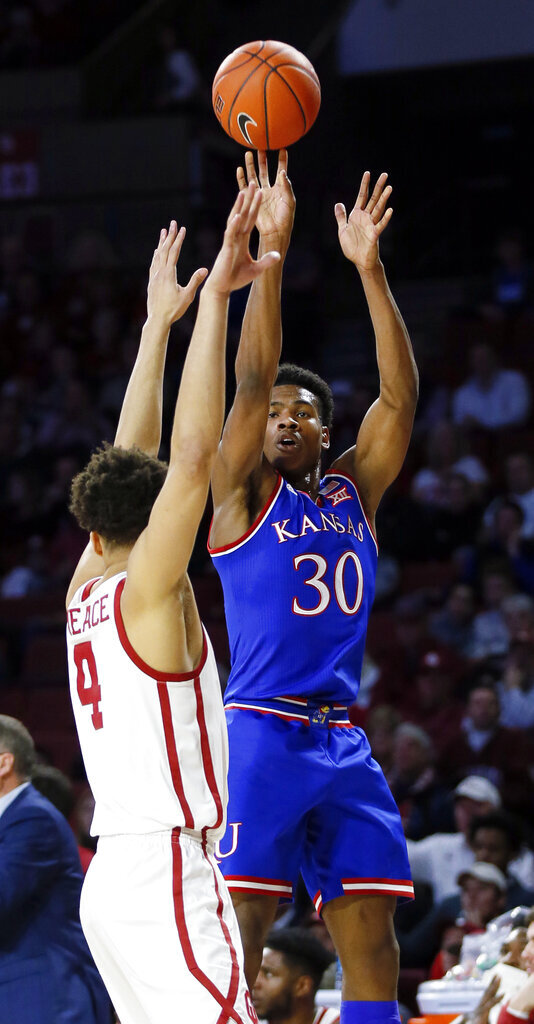 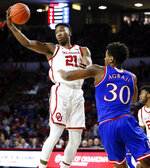 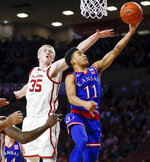 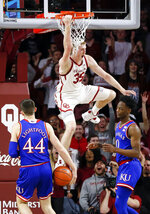 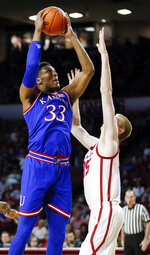 NORMAN, Okla. (AP) — It took more than half an hour for Kansas coach Bill Self to address the media after the Jayhawks' loss to Oklahoma.

He had plenty to address with his team first.

Kristian Doolittle had 24 points and 11 rebounds to help the Sooners roll past No. 13 Kansas 81-68 on Tuesday night and end the Jayhawks' run of Big 12 regular-season titles at 14 years.

"We obviously got it handed to us right from the get-go and everything," Self said. "For this team to perform well, we've got to have some things go right and be turned up. When it started going bad, we couldn't change it."

The last time Kansas didn't at least tie for the conference crown, Oklahoma State won it outright in 2003-04. Now, Kansas State and Texas Tech remain in contention for the championship. The fans knew — they chanted "streak is over" in the closing minutes.

"We knew what was on the line for this game," Manek said. "We wanted to come out and hit them first. I think we did that. We played really well together and played as a team."

Oklahoma picked up its first double-digit win over Kansas since 1990 in its final home game of the season.

Manek scored 10 early points to help the Sooners roll out to a 23-7 lead. Kansas crept back into the game before a dunk by Manek put the Sooners up 30-18.

In a perfect example of the way the first half went, the Sooners ran the shot clock down so far that the student section started counting. As time ran out, Doolittle bulled his way through Kansas' defense for a layup to put the Sooners up 41-22. The Sooners led 41-28 at the break.

Oklahoma poured it on in the second half. A 3-pointer by Odomes pushed the Sooners' lead to 59-37, and the Sooners remained in control the rest of the way. Oklahoma shot 49 percent overall.

"It was easy for them to make shots," McCormack said. "They were in rhythm and feeling good. To them, the basket was as wide as they wanted it to be."

Oklahoma coach Lon Kruger said it was one of his team's best games.

"Probably for 40 minutes, at least the first 35, I thought it was pretty solid," he said. "Pretty sharp on both ends of the floor."

Kansas: Sure, the Jayhawks lost a road game to a team that has caught fire late in the season and likely will reach the NCAA Tournament. But the way they lost should be a concern, as should the close call in a win over struggling Oklahoma State last Saturday. Kansas doesn't look like Kansas right now.

Oklahoma: The Sooners finally got that marquee win they have been looking for during conference play. The Sooners had lost five straight at one point, but now have won four of five. They head toward the postseason with momentum.

Kansas will likely drop for this one because the game was more lopsided than the final score indicates. Kansas trailed by 19 with 1:53 to go before a late flurry.

Kansas made just 7 of 31 3-pointers. The Jayhawks went 20 for 35 inside the arc, but couldn't resist firing jumpers.

Oklahoma: At No. 18 Kansas State on Saturday.