Oklahoma's Moser expects Sooners to improve in his 2nd year 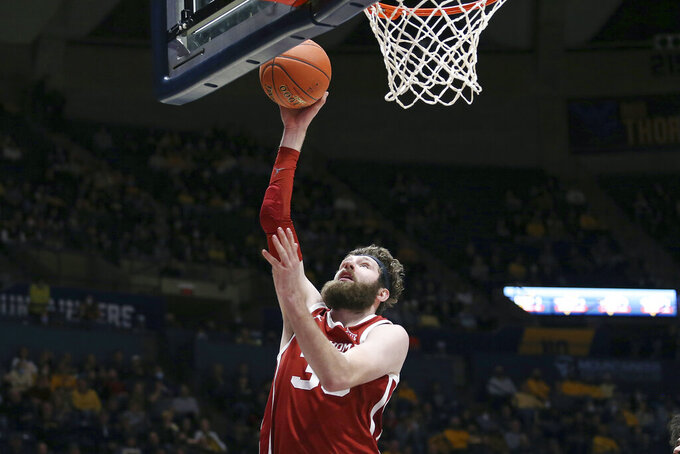 FILE - Oklahoma forward Tanner Groves shoots during the first half of an NCAA college basketball game against West Virginia in Morgantown, W.Va. on Jan. 26, 2022. The Sooners open the season on Nov. 7 at home against Sam Houston. (AP Photo/Kathleen Batten, File)

Oklahoma coach Porter Moser is glad to see some familiar faces this season.

In his first year last season, the Sooners finished 19-16 and reached the second round of the NIT with a team full of transfers pieced together by a new staff during the pandemic.

The Sooners still will rely heavily on transfers again. Moser will have just two players back who averaged more than 20 minutes per game. But Tanner Groves and Jalen Hill are key returnees who will provide some stability.

“Makes a heck of a difference when you have guys that have been through your program,” Moser said. “We’ve got some guys back. That makes all the difference in the world when you bring in your newcomers.”

Transfers Joe Bamisile and Grant Sherfield look ready to jump in after dominating during Oklahoma's foreign tour this summer. Bamisile averaged 16.3 points and 5.0 rebounds for George Washington last season. He has three years of eligibility remaining.

Sherfield averaged 19.1 points and 6.4 assists for Nevada last season. He is the Big 12 preseason Newcomer of the Year -- the first Sooner since Amath M’Baye in 2012-13 to earn that honor. He has two years of eligibility remaining.

Moser said Sherfield creates offense, something he hopes will help the Sooners in close games.

“We struggled in those areas last year,” he said. “We really did. We struggled at really having a guy just go get one for us at times. I think the really, really good teams all had a shot clock guy. I think he’s one of those kind of guys for us.”

Godwin, a 6-foot-10 forward who played at Southmoore (Oklahoma) High School, is a transfer from Wofford. He appeared in 30 games last season for the Terriers with 12 starts. He shot 62.1 percent from the field and averaged 6.3 points and 3.1 rebounds per game.

Otega Oweh, a 6-6 guard from Somerset, N.J., was a four-star prospect on ESPN.com, 247Sports and Rivals. He was named Nike EYBL Peach Jam Breakout Player of the Session.

Benny Schröder, a 6-7 guard from Munich, Germany, played for the U18 German National Team in the 2021 FIBA U18 European Challengers tournament.

Jacob Groves – Tanner’s brother – is back. The senior averaged 4.6 points and 2.9 rebounds last season and scored 15 points in a Big 12 Tournament win over Baylor. He started after Elijah Harkless went down with injury last year, and he has improved from there.

“That confidence boost at the end of the year that he got, I think that’s really propelling him this offseason,” Moser said. “Just like anything, we were chasing it. We were trying to get better. I thought we were doing some better things offensively towards the end of the year.”

The Sooners open the season on Nov. 7 at home against Sam Houston with ranked opponents next:. They visit Villanova on Dec. 1 in the Big East-Big 12 Battle. They then play Arkansas in Tulsa on Dec. 10. They open conference play on Dec. 31 at home against Texas. They host Alabama in the SEC/Big 12 Challenge on Jan. 28.