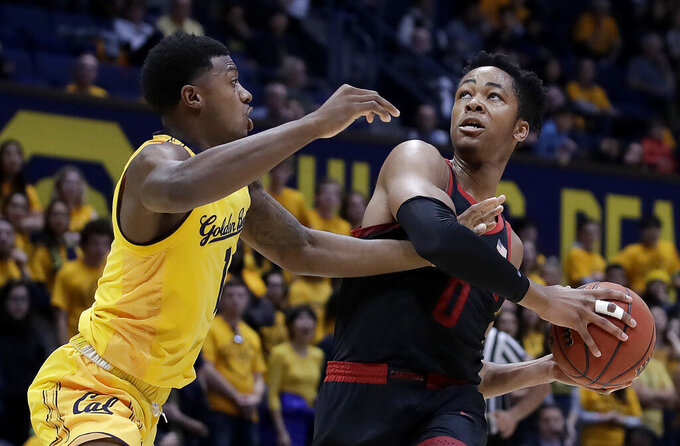 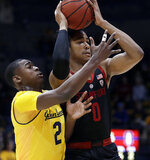 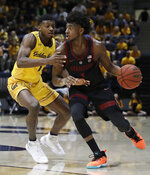 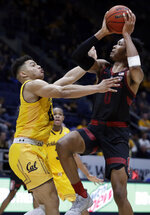 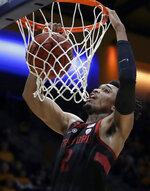 BERKELEY, Calif. (AP) — Stanford coach Jerod Haase would like to see KZ Okpala improve his passing and defense over the next few years.

Okpala's scoring? Not an issue at all.

Okpala scored a career-high 30 points and had eight rebounds, and Stanford held on to beat California 84-81 on Sunday.

It's the 12th time this season that Okpala has had 20 or more points, most in the Pac-12 teams and eight more than he had all of last season.

"He's been a rock in terms of offensively producing," Haase said. "There's so much more for him to grow, but he's really developing really quickly. He's a foundational piece for everything we do."

Okpala's shot 10 of 17 but went 0-for-4 beyond the arc and overcame missing five free throws in the second half.

"Just making the right reads," Okpala said. "The game was coming to me. Every game I have the same approach, use my ability to get to the rim."

Justice Sueing had 23 points and seven rebounds for California (5-16, 0-9). The Golden Bears have lost 10 straight, matching the longest streak in school history.

Okapala scored 19 in the second half and made a clinching free throw with 13.3 seconds left, but it was a play moments earlier that had the Haas Pavilion crowd buzzing.

California's Matt Bradley drove baseline and scored for an apparent tying basket. Stanford's Josh Sharma was initially called for his fifth foul but the play was reviewed by officials and overturned.

Instead of Bradley going to the free throw line for a chance to give the Bears the lead, Stanford got the ball and closed out to beat Cal for the third time in four games.

"I didn't know that you could overturn the call," Cal coach Wyking Jones said. "He's a great official. He went to the monitor and saw something different. I respect the call."

Paris Austin missed a 3-pointer for the Bears as the buzzer sounded.

Okapala got going early with a dunk, then had a steal and layup but the Cardinal sputtered for most of the first half and had 11 turnovers before the break.

Cal took advantage and led by five midway through the first half before Stanford closed with its best run of the game and pulled within 38-37 on Kodye Pugh's short hook.

The Bears also got an early lift from 7-foot-3 freshman center Conor Vanover, who scored six consecutive points during one stretch then added an emphatic dunk off a pass from Matt Bradley. Vanover finished with a season-high 15 points.

Stanford: The Cardinal overcame their early offensive problems and rallied from five down in th final 5½ minutes. . Cormac Ryan returned after missing four games with a right ankle injury. Ryan sat out three games earlier in the season with a similar injury to his left foot

California: Vanover's previous season-high for points was 10 coming in back-to-back games against USC and UCLA. ... The 10 consecutive losses ties Cal's 1962 team for the longest in school history. . Roman Davis did not play for a second consecutive game because of back soreness.

"It was some kind of a dire situation so I felt very excited when they went to the monitor that there was still hope." - Haase on the overturned call.

"Once we get over that hump, we'll be able to turn the table and take that momentum and finish the right way." - Sueing, on his team weathering its 0-9 conference record.

California: Plays at Oregon on Wednesday.