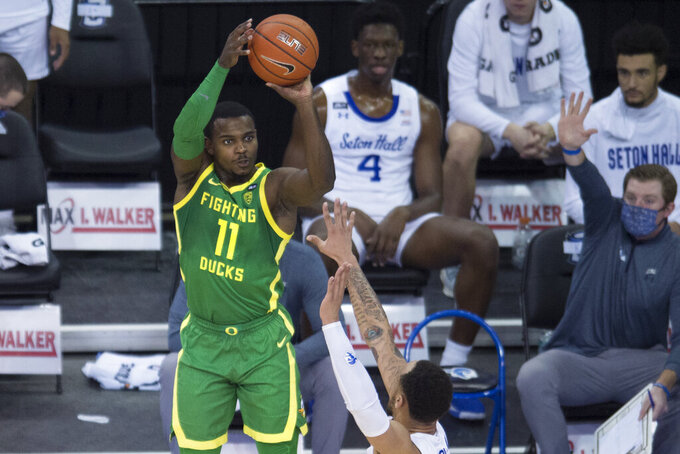 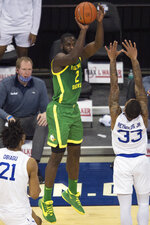 OMAHA, Neb. (AP) — Eugene Omoruyi put together another strong game for No. 21 Oregon, and coach Dana Altman is eager to see what he does next.

Playing in his second game since transferring from Rutgers, Omoruyi scored 22 points to lead the Ducks past Seton Hall 83-70 on Friday night.

“He's all about team, and it's so easy to coach and work with him,” Altman said. "He listens, he tries to do everything we ask him to do. When he doesn't do something and you bark at him a little bit, he knows it and he's ready to adjust.

Oregon bounced back from an 83-75 loss to Missouri in its opener, a game in which Omoruyi had a career-high 31 points and 11 rebounds in his first game since transferring.

The Ducks (1-1) didn't pull away against Seton Hall until the last eight minutes, when they went on a 14-4 run and built a 16-point lead. Eric Williams Jr. scored 10 of his 15 points in the second half and Chris Duarte finished with 14 points.

Seton Hall (1-3) is off to its worst start since the 1982-83 team opened with five straight losses. Shavar Reynolds Jr. led the Pirates with 17 points and Tyrese Samuel and Myles Cale each had 11.

The Ducks all but shut down Pirates star Sandro Mamukelashvili. It took him 15 minutes to make his first basket, and that was a bank-in 3 from the wing. The 6-foot-11 senior didn't score again until he dunked with about five minutes left in the game.

Mamukelashvili came into the game averaging a Big East-leading 21.7 points. He attempted only seven shots and finished with 10 points.

“Our goal was to keep the ball out of his hands as much as possible,” Altman said. “There's no doubt he's the guy who stirs the drink for them.”

Seton Hall coach Kevin Willard said it was apparent the Ducks were doing all they could to clamp down on Mamukelashvili.

“I didn’t do a good job of moving him around enough to get him in different situations,” Willard said. "That’s more on me than it is on Sandro.”

Oregon got a boost from LJ Figueroa, a transfer from St. John's who received his NCAA waiver on Friday. He scored six points, grabbed nine rebounds and played tough defense on Mamukelashvili.

“Well, LJ Figueroa is a heck of a player," Altman said. "He gave us so much energy tonight. He was the difference in the game. If we didn't have him, I'm not sure we would have been successful.”

Oregon: The game was the Ducks' second in three days in Omaha because of scheduling problems associated with the COVID-19 pandemic. was able to use his connections at Creighton to set up the games at CHI Health Center. Altman coached at Creighton for 16 years before leaving for Oregon in 2010.

Seton Hall: The Pirates started a four-game road trip that has them playing in four states over seven days. They need to get Mamukelashvili more involved in the offense early. He also got off to a slow start in a 76-63 loss at Rhode Island on Wednesday.

LIFE ON THE ROAD

The Ducks were to fly back to Eugene, Oregon, immediately after the game. Altman had hoped to pick up another game or two while the team was in Omaha.

Altman said it wasn't a pleasant trip personally. He would have liked to visit friends and see his father in his hometown of Wilber, Nebraska, about a 90-minute drive from Omaha.

“Going on the road is not any fun this year,” Altman said. “I didn't even leave my hotel room, I ate whatever meals we had from plastic containers, didn't have any vegetables or salad. They bring you pasta. Didn't eat very well the last four days. I had a nice room and everything, but it wasn't any fun staying in it for four days.”