Oral Roberts hoping to move past upset, focus on Gators 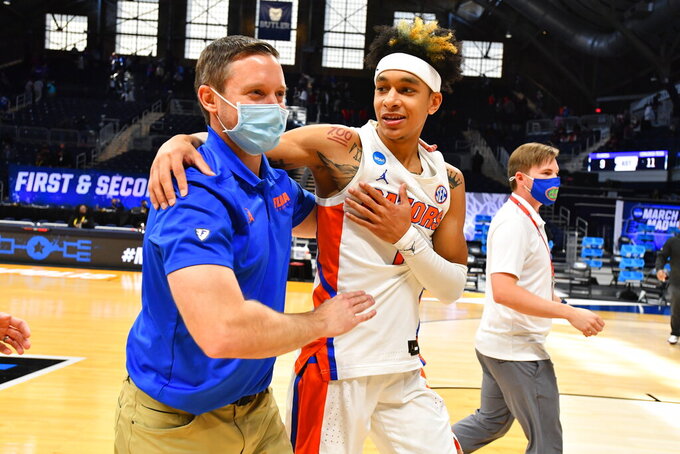 The challenge of focusing on another game without taking time to savor a shocking first-round NCAA Tournament upset of second-seeded Ohio State may be asking a lot.

Mills' message to the 15th-seeded Golden Eagles: The first-round win was great. A Sweet 16 appearance would be even better.

Oral Roberts upended the South Region with its 75-72 overtime win over Ohio State on Friday, earning a second-round game on Sunday against No. 7 Florida.

The Gators also were stretched to overtime in their 75-70 win over No. 10 Virginia Tech. A tight Florida-Virginia Tech game was no surprise. Few expected to see a close battle between Oral Roberts and Ohio State, much less the Golden Eagles becoming the ninth 15 seed to win a tournament game.

The last win by a 15 seed came in 2016, when Middle Tennessee State beat Michigan State. The only 16 seed to win was Maryland-Baltimore County when it beat top-seeded Virginia in 2018.

Mills said he'll try to help his players move past the momentous victory.

“They want to win so you do have to avoid the distractions,” Mills said. "You do have to avoid some of this hype that comes with it. I’m just going to encourage them, don’t return text messages or look at whatever social media until Monday. Just wait.

“That stuff doesn’t need to be tended to right now unless it’s your mom or your dad or your girlfriend. You probably need to answer that one. But for the most part you have to eliminate distractions in order to be good at this time of year.”

Mills, who has coached in four Elite Eight and two other Sweet 16 games as an assistant at Missouri, said another NCAA win would be even sweeter.

“You want your players to have this experience and enjoy it, but the reality is I can tell you I’ve been to four Sweet 16s and that’s a better feel,” Mills said. “So your attention turns pretty quickly.”

Oral Roberts' winning formula against Florida may be to again rely on its two leaders. Kevin Obanor and Max Abmas had 30 and 29 points, respectively, against the Buckeyes.

“At the end of the day when they ranked us, it’s just a number,” Obanor said. “We had the mindset of show us you deserve to be No. 2.”

Florida (15-9) played without forward Omar Payne, who was benched. The Gators then lost starting guard Tyree Appleby midway through the second half with a cut on his forehead.

Colin Castleton have the grit needed to keep winning.

“Just we weren’t losing the game,” Castleton said. “That’s what it comes down to. You’ve got to have the mindset we’re not losing this game. We don’t want to go back to Florida yet.”

Another big underdog relished an upset of a Big Ten team. North Texas, the 13th seed, will face fifth-seeded Villanova in the second round. The Mean Green advanced with their first NCAA Tournament win, 78-69 over No. 4 seed Purdue. Villanova beat 12th-seeded Winthrop 73-63.

Third-seeded Arkansas can look forward to what may be an entertaining contrast of styles against sixth-seeded Texas Tech.

The high-scoring Hogs will be challenged by Texas Tech’s rugged defense.

The Razorbacks overcame an early scare to beat Colgate 85-68 after trailing by 14 points in the first half. Texas Tech advanced by beating 11th-seeded Utah State 65-53.

There was only a little first-round drama for No. 1 seed Baylor, which overcame a slow start to beat 16th-seeded Hartford 79-55. Next up is ninth-seeded Wisconsin, a more dangerous opponent for the Bears (23-2).

Wisconsin made the most of its edge in experience in beating No. 8 North Carolina 85-62. The Badgers adjusted their rotation and outrebounded a Tar Heels team that has plenty of depth inside.