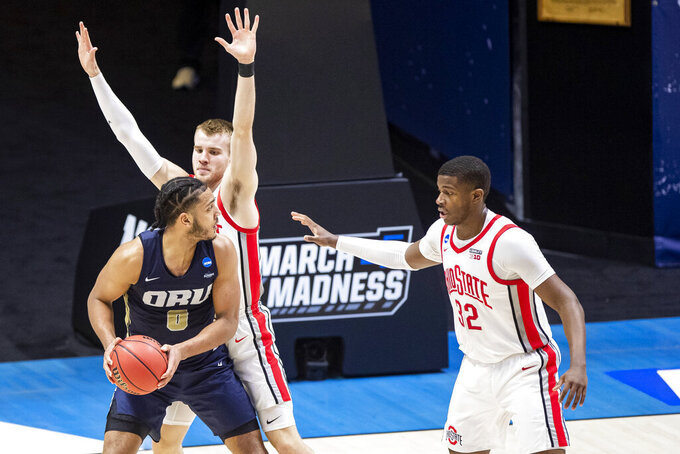 Oral Roberts' Kevin Obanor (0) gets pressure from Ohio State's Justin Ahrens, center, and E.J. Liddell (32) during the first half of a First Round game in the NCAA men's college basketball tournament, Friday, March 19, 2021, at Mackey Arena in West Lafayette, Ind. (AP Photo/Robert Franklin)

WEST LAFAYETTE, Ind. (AP) — Ohio State's players were dancing around in the moments before tipoff against Oral Roberts, relaxed and full of swagger.

The Buckeyes aren't dancing anymore. The 15th-seeded Golden Eagles pulled off the first major upset of the first NCAA Tournament in two years, holding off second-seeded Ohio State 75-72 in overtime on Friday.

“When they rank them, it was only just a number at the end of the day,” said Kevin Obanor, who led Oral Roberts with 30 points and 11 rebounds. “We put our shoes on just as the other team puts their shoes on. We just had the mindset of, ‘Show us that you deserve to be No. 2,’ and we came out with a lot of confidence.”

Oral Roberts got poised, impeccable performances from its two stars, Obanor and guard Max Abmas, to become the ninth 15 seed to win a first-round game and the first since Middle Tennessee shocked Michigan State in 2016. Last year's tournament was called off because of the pandemic.

“Their two players that obviously concerned us were terrific, so give them, their coaches, their players, their program, their university a lot of credit for this win,” Ohio State coach Chris Holtmann said. “We had no illusions that this was going to be by any stretch anything other than a really challenging game, and it obviously was that from the very jump.”

Ohio State could have tied it in the closing seconds of overtime, but Duane Washington Jr.’s open 3-pointer from straight away bounced off the side of the rim, and Oral Roberts celebrated its first tournament win since 1974.

The Golden Eagles' roster is full of lightly recruited players who found their way to the small, private Christian school in Tulsa, Oklahoma. The Summit League champions bowed their heads in a prayer circle after their victory over the Big Ten power.

“I know growing up, all my life, I was always like the underdog,” Obanor said. “The school is not a big school. Just to prove people wrong, it’s a blessing just to have people that are really committed and believe that we’re the better team.”

The Golden Eagles (17-10) will play seventh-seeded Florida in the South Region on Sunday.

Oral Roberts scored the game’s first seven points, including a 3-pointer by Abmas from the logo that drew a collective “Ooooh!” from the socially distanced crowd.

The Summit League champions led by seven in the second half before Ohio State rallied to take a 60-58 lead on a pullup jumper by CJ Walker with just under five minutes to play.

Obanor was fouled with 14 seconds to play, and he made both free throws to tie the game at 64. Washington missed a step-back jumper in the closing seconds, and the Buckeys had no answer for Obanor in the extra session.

“This is obviously a really, really bitter end to a terrific season,” Holtmann said. “We’ll own that and accept it and we’ll move forward.”

Five Ohio State players knelt during the playing of the national anthem, one of many such demonstrations during the tournament.

Ohio State outrebounded Oral Roberts 49-32, but the Golden Eagles balanced that out by committing six turnovers to the Buckeyes’ 16.

Oral Roberts coach Paul Mills on getting ready for Florida: “I mean, the reality is you have to turn around and you’re about to play another one, so the celebration better be pretty quick. If you spend all your time looking back at your wedding day videos, you’re probably not going to have a very good marriage.”