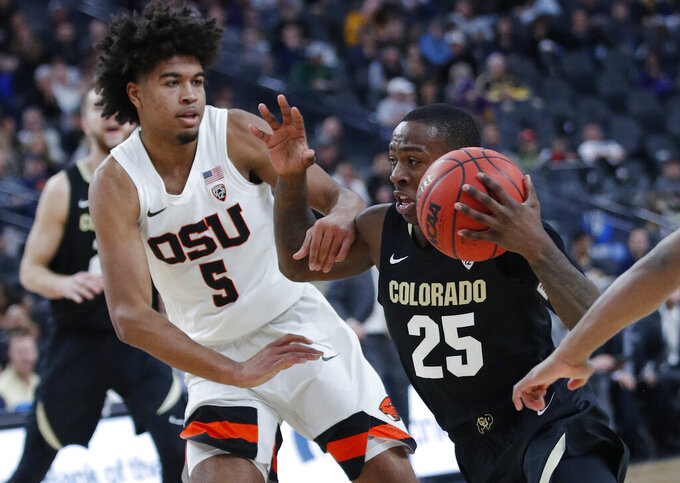 Colorado's McKinley Wright IV drives around Oregon State's Ethan Thompson during the first half of an NCAA college basketball game in the quarterfinals of the Pac-12 men's tournament Thursday, March 14, 2019, in Las Vegas. (AP Photo/John Locher) 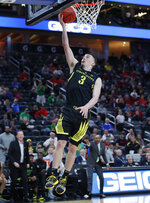 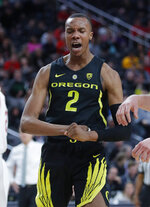 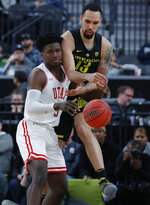 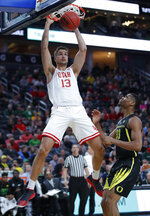 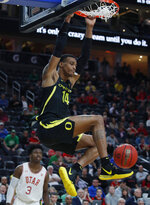 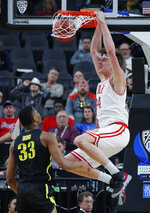 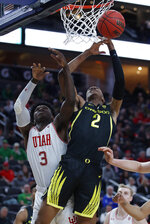 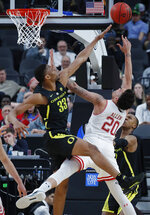 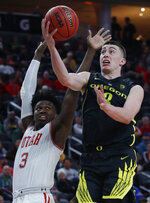 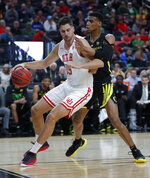 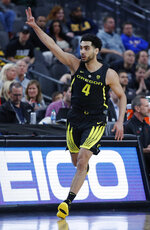 LAS VEGAS (AP) — Two down, two to go for the Oregon Ducks and their dominant defense.

Louis King and Payton Pritchard scored 20 points each, and Oregon shut down Utah 66-54 Thursday night in the Pac-12 quarterfinals.

"I loved our defensive effort," said Ducks coach Dana Altman, who agreed to a contract extension through 2025-26 earlier Thursday. "It kept us in the first half, and we were able to find a way in the second."

The sixth-seeded Ducks (20-12) had a second straight strong defensive game in the Pac-12 tournament to get halfway to their goal of four wins in four days.

Oregon caused the Utes problems with its press even without forcing many turnovers, often making them run their offense deep into the shot clock. The Ducks had Utah's leading scorer Sedrick Barefield in foul trouble in the first half and held him to two points on 2-of-12 shooting. He was 1 for 9 from 3-point range.

"Definitely give them credit," Utah coach Larry Krystkowiak said. "As we all know, it's Oregon's defense that's put them in the position they're in right now. And with as physical as the game is, it fits their blueprint."

The Ducks put on a defensive show in their Pac-12 opener, snagging 14 steals while holding Washington State to 31 percent shooting in the 55-47 win. It was the fifth straight game Oregon held its opponent to under 62 points, a run that began shortly after coach Dana Altman shifted to a starting lineup with four 6-foot-9 players.

That earned the Ducks a rematch with Utah, which they beat by two in last year's Pac-12 semifinals on Kenny Wooten's game-ending blocked shot. Oregon also beat the Utes in their lone meeting this season, 78-72 in Salt Lake City.

Both teams clamped down on defense in the quarterfinals, neither giving an inch.

Utah had a stretch of more than six minutes without a field goal and shot 8 for 21 in the first half. Barefield was limited to eight minutes after picking up two fouls.

"That first half, our defense did keep us in it," Altman said. "As poorly as we played offensively, we were still in the ballgame."

The Ducks started making shots in the second half and the Utes didn't. Oregon stretched the lead to nine with seven minutes left and never let Utah make a push.

"It was just one of those games. Shots just weren't going in," Tillman said. "A number of great looks, it just wasn't falling."

Utah had trouble with the Ducks' constant pressure all night and missed numerous open shots when it got them.

Oregon's defense has hit its prime at just the right time.

Utah waits to see if will get a postseason tournament invite.