Oregon State rallies from 16 points down, stuns UCLA in OT 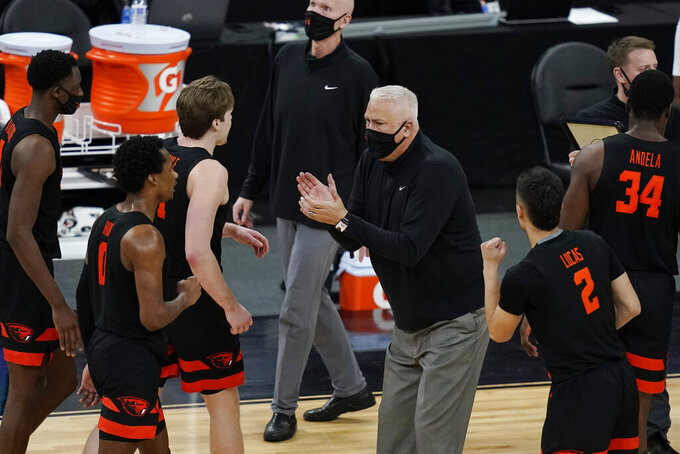 Oregon State head coach Wayne Tinkle claps for his players at a time out during the second half of an NCAA college basketball game against UCLA in the quarterfinal round of the Pac-12 men's tournament Thursday, March 11, 2021, in Las Vegas. (AP Photo/John Locher) 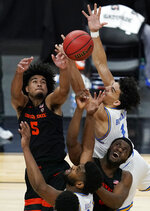 LAS VEGAS (AP) — Warith Alatishe scored a career-high 22 points with 10 rebounds, Ethan Thompson scored all 18 of his points after halftime and Oregon State rallied from a 16-point deficit to beat UCLA 83-79 in overtime on Thursday in the Pac-12 Conference Tournament.

Alatishe got a floater to fall in the lane with 11.2 seconds left in regulation to put the Beavers up 70-69 and UCLA's Jules Bernard tied it with a free throw after missing the first. Gianni Hunt’s heave at the buzzer, from near midcourt, went over the backboard.

Rodrigue Andela was sent to the line with 57.8 seconds left in overtime — after missing four of his first eight free-throw attempts — and sank both free throws for a 79-78 lead. Seconds later, he blocked Bernard's shot.

After an Oregon State miss, Bernard raced down the court but turned it over and Jarod Lucas, a 91% free-throw shooter, made two for an 81-78 lead with 4 seconds left. Oregon State elected to foul and Johnny Juzang made the first of two free throws. He missed the second and Andela made two more free throws to seal it after grabbing the rebound.

Oregon State will play regular-season champion Oregon on Friday in the semifinals. The No. 5 seed Beavers began the tournament against the fourth-seeded Bruins after the Pac-12 adjusted the format due to Arizona not playing. The Ducks opened with an easy win over Arizona State, and will look to take a 2-1 series against their rivals after an 80-67 win in the regular-season finale.

Thompson fouled out with 1:34 left in overtime and Hunt was called for his fifth at the other end, trying to set a high screen. Roman Silva also exited with 5:35 left in regulation after playing just 14 minutes.

Bernard had with 19 points and 10 rebounds to lead UCLA (17-9), which lost its fourth straight game. Juzang scored nine of his 12 points in the first half before going scoreless in the second half and Jaime Jaquez Jr. added 11 points.

UCLA used an 18-2 run to go ahead by 16 points in the first half, and the Beavers had a stretch of 10-plus minutes with just one field goal. Oregon State shot 29.6% in the first half, but made three of its last four, capped by a Lucas 3-pointer to pull to 34-24 at the break.