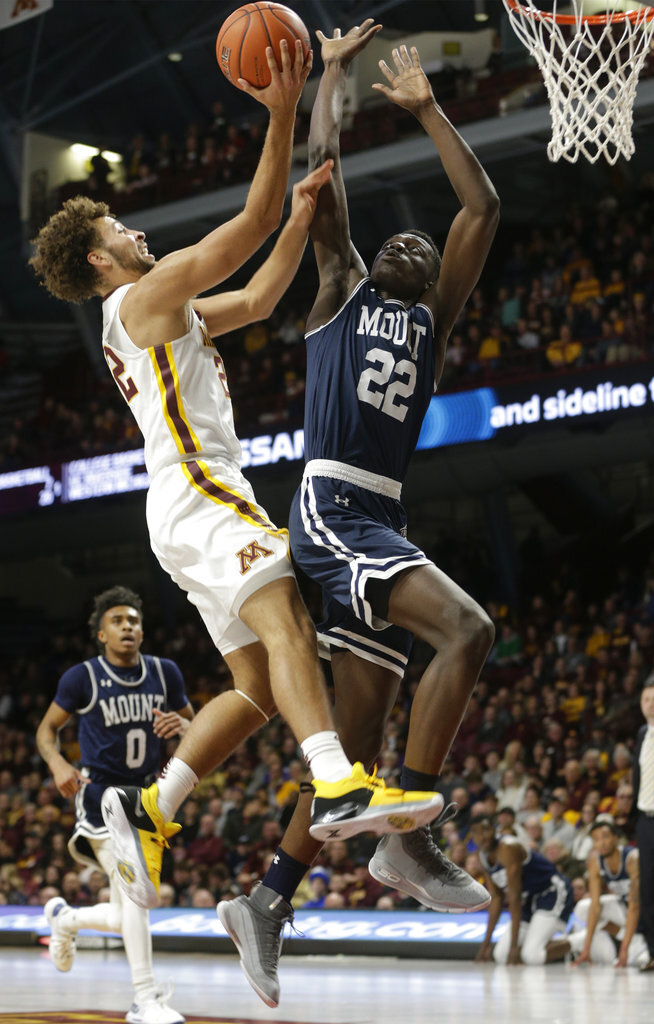 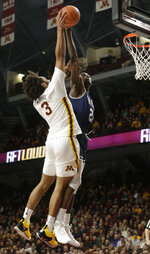 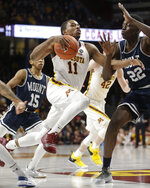 MINNEAPOLIS (AP) — Having four players in double figures and the return of a key player Sunday was a nice way for Minnesota to get ready for the resumption of Big Ten play.

Daniel Oturu recorded his fourth straight double-double with 12 points and 10 rebounds to lead the Gophers past Mount St. Mary's 71-53.

Minnesota also got 15 points from Dupree McBrayer and 13 from Amir Coffey. Jordan Murphy had 10 points and nine rebounds.

"If we want to do what we're trying to do it's five guys. It's Michael Hurt, it's Eric Curry, it's Amir, Dupree and Murph," said Minnesota coach Richard Pitino. ". Those five guys know what it takes to win in this league. Those guys went a whole month of February (7-0 in 2017) and did not lose in this league."

However, there is still a significant drop when Minnesota (11-2) goes to its bench, where five players combined for 15 points, including three by Hurt.

A spark could come from the return of Curry to the court for the first time in 644 days. After missing the 2017-18 season because of a torn ACL, the redshirt sophomore aggravated the knee injury in the fall and was held out until Minnesota's final non-conference game as a precaution.

Curry, a 6-foot-9, 240-pounder who averaged 5.5 points and 5.2 rebounds in his freshman season, received a loud ovation when he entered 3:45 into the game, flashing a wide smile on his face. He scored on a reverse layup seven minutes into the first half in transition for his first points since the 2017 NCAA tournament. He finished with four points and six rebounds in 17 minutes.

"It was very important to just get my game back. The game is totally different than practice. Just to get the feel of the crowd and the movement of everything is amazing," said Curry, who couldn't sleep and texted Pitino at 1:45 a.m. saying he was ready to play.

McBrayer also likes what Curry brings in his own end.

"Eric can cover guards. That gives us so much more room to switch. Just having him out there we get different looks defensively."

Vado Morse scored 18 points and Dee Barnes added 13 for the Mountaineers (3-10), which rallied midway through the second half before fading.

Up by eight at the half, Minnesota opened the second half on a 13-5 run, including five points from Gabe Kalscheur, before the Mountaineers scored 10 straight points to get within 44-38 with 11:26 to play.

A jumper by Oturu, a freshman who has scored in double figures in five straight, started a 10-2 stretch to put Minnesota up 61-47 with 3:52 to go.

Minnesota was 23 of 30 from the free-throw line. It entered the game fifth nationally in getting to the charity stripe with 341 attempts through its first 12 games. Its 228 makes were 14th-best.

CONCERNS FROM 3 OR NOT

Mount St. Mary's: The Mountaineers — who started the season with nine straight losses including road defeats at North Carolina State (105-55), Maryland (92-77) and St. John's (85-71) — have one of the most inexperienced rosters in the nation under first-year head coach Dan Engelstad with all 16 players either freshmen or sophomores. Sunday provided continued growth.

Minnesota: The Gophers need to be better with the ball. It had 12 against another mid-major foe after 14 in their last game against North Carolina A&T.

Minnesota: The rest of the regular season is all Big Ten play, beginning Thursday at No. 15 Wisconsin. The Gophers lost at Ohio State and beat Nebraska in early December conference action.