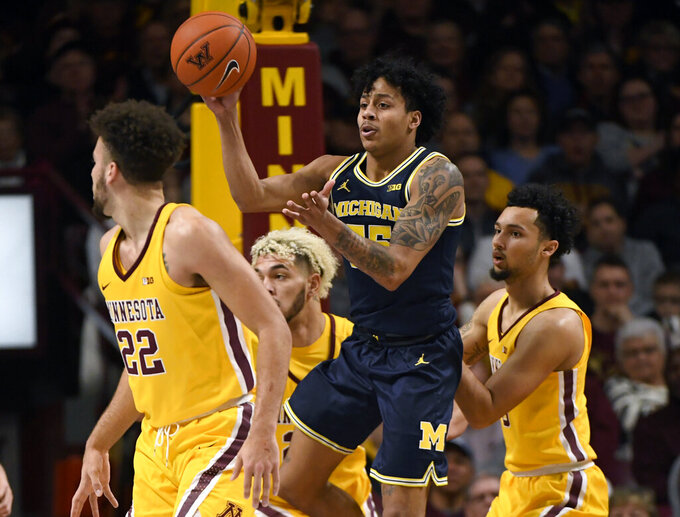 Michigan's Eli Brooks (55) passes the ball away from Minnesota's Gabe Kalscheur (22), Jarvis Omersa (21) and Payton Willis (0) in the first half during an NCAA college basketball game on Sunday, Jan. 12, 2020, in Minneapolis. (AP Photo/Hannah Foslien)

MINNEAPOLIS (AP) — Daniel Oturu shook off an injury and had a career game to help Minnesota take down another ranked opponent.

The sophomore center had 20 points in a dominant first half, and he continued his roll with six quick points after the break. But with 14:35 remaining, he hit the deck hard while fighting for a rebound. He stayed on the floor for nearly five minutes, clutching his left shoulder as a hush fell over the crowd.

Oturu received treatment on his shoulder in the locker room and returned to a standing ovation after missing about three minutes of action.

“It felt like it slipped in and out, so I was in a lot of pain,” Oturu said of his shoulder. “But regardless of what injury or whatever I was feeling, I was going to go back out there because I needed to help my team win this game. That was the most important thing.”

Zavier Simpson had 19 points and nine assists for Michigan (11-5, 2-3). Franz Wagner made four 3-pointers and scored 17 points for the Wolverines, who led by 11 early but gave up big runs to Minnesota at the end of each half.

“We started off good and had great energy, and then kind of lost that,” Wagner said. “The game is not won in 10 minutes, not won in the last 3 minutes. It’s won the whole game. You’ve got to play solid all 40 minutes.”

Marcus Carr had 21 points and 12 assists for Minnesota (9-7, 3-3 Big Ten), which knocked off No. 3 Ohio State at home on Dec. 15. Alihan Demir scored 13 points and helped shore up Minnesota’s inside game when Oturu was out. Demir and Carr played key roles down the stretch as the Gophers pulled away after a back-and-forth second half.

Eli Brooks hit a 3-pointer with 3:20 to play to put Michigan ahead 65-64. But Oturu answered on the other end with a basket in the low post to give Minnesota the lead for good with 3 minutes left.

Michigan only had eight turnovers on the day, but two came at the worst possible time. After Minnesota regained the lead, the Wolverines turned it over on their next two possessions. The Gophers made them pay with a bucket in the paint by Demir and two free throws by Carr.

Then, after Jon Teske’s short hook rolled out, Oturu grabbed the rebound and the Gophers got a corner 3-pointer from Payton Willis to take a 73-65 lead with 1:02 to play.

“Unfortunately, we didn’t get a chance to capitalize on any of our offensive sets toward down the stretch,” Wolverines coach Juwan Howard said.

Michigan took an early lead and was in control for much of the first half. A 3-pointer by Teske gave the Wolverines their biggest lead at 30-19 with 5 minutes to play in the half.

But the Gophers closed on an 11-1 run that was bookended by two baskets from Carr, the latter coming with 29 seconds to play. Minnesota’s defense then forced a miss on a desperation 3-pointer at the buzzer as Michigan took a 31-30 lead to the locker room.

“I loved the defense,” Minnesota coach Richard Pitino said. “Towards the end when we needed to get a stop, I thought we communicated well and we blocked out. … That’s a very good offensive team and we held them to 65 points.”

Carr was 2-for-7 shooting in the first half, but he came to life after the break. After hitting two free throws and a driving layup, he made a 3-pointer and then fed Oturu for an alley-oop dunk to put the Gophers up 45-41.

“He came back and gave his team a big lift in the second half with his energy,” Howard said. “The crowd got really into it. The kid is special. He’s not only done it to us, but he’s been playing very well throughout the season thus far.”

The game featured two of the top point guards in the Big Ten, and they both took care of the ball while making big contributions on offense. Simpson played all 40 minutes and had two turnovers, while Carr also played 40 minutes without a turnover.

Michigan: The Wolverines lived and died from beyond the arc. They made five of their first six 3-pointers before cooling off, finishing 10 for 28 from long range.

Minnesota: The Gophers struggled to find offense from anyone other than Oturu in the first half. Through the first 15 minutes, Oturu had scored 16 of Minnesota’s 19 points. He finished the first half 9 for 12 from the floor, while his teammates went 4 for 16.

Michigan: Two of the top three offenses in the Big Ten will square off on Friday when the Wolverines travel to Iowa. It’ll be a rematch of the conference opener, which Michigan won 103-91.

Minnesota: The Gophers will look for their sixth straight home win when they host Penn State on Wednesday.