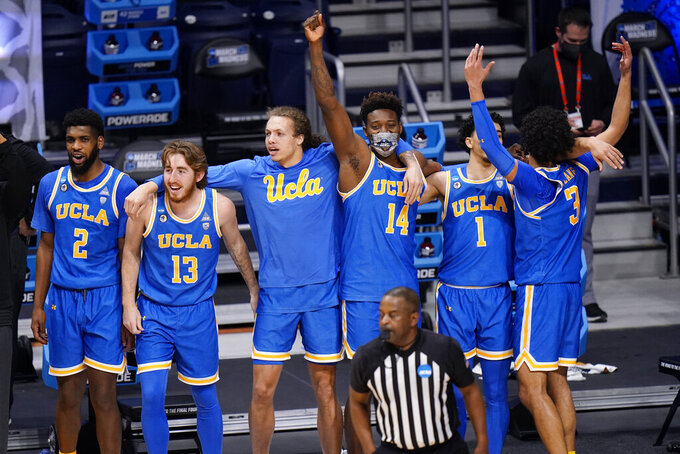 After living on the fringes of the rankings during the regular season, Pac-12 teams are making a statement in the NCAA Tournament.

All five Pac-12 schools in the bracket advanced to the round of 32, including UCLA winning two games already. The 11th-seeded Bruins knocked off Michigan State in the First Four and then upset sixth-seeded BYU in the first round. It's only the third time in conference history the Pac-12 has advanced five teams to the round of 32.

UCLA coach Mick Cronin said it's about time the conference gets its due.

“You’re finding out that the Pac-12 not being ranked all year was an absolute joke,” Cronin said. “And some people ought to be ashamed of themselves. Now, maybe people (in the East) can’t stay up late, and I don’t blame them because I can’t either. So maybe people can’t stay up for our games.”

Oregon State, the Pac-12 Tournament champion, came in as a 12 seed and earned its first NCAA Tournament win in nearly four decades with a rout of fifth-seeded Tennessee. The Beavers followed that up by ousting fourth-seeded Oklahoma State on Sunday night to reach the Sweet 16.

Fifth-seeded Colorado had no trouble with No. 12 Georgetown, and sixth-seeded USC took care of No. 11 Drake. Seventh-seeded Oregon advanced after positive COVID-19 tests forced VCU out of the tournament.

The stacked Big 12 went 5-1 and would have run the table in the first round if third-seeded Texas hadn't been upended by No. 14 Abilene Christian on Saturday night. The Big Ten went 6-2 but took some lumps. Second-seeded Ohio State was sent home by 15 Oral Roberts in the biggest upset of the opening round, and fourth-seeded Purdue fell to 13th-seeded North Texas.

The Big Ten misery continued when Illinois, the top seed in the Midwest, was beaten by eighth-seeded Loyola Chicago in the second round and Rutgers was beaten by Houston. It was worse for the Big 12, which saw West Virginia and Texas Tech sent home along with the Cowboys.

Ohio coach Jeff Boals says there’s plenty of room on the Bobcats bandwagon for everyone, including Buckeyes fans.

“We’ll take every Buckeye fan that wants to keep cheering,” Boals said a day after the West Region’s 13th-seeded Bobcats' first-round upset of fourth-seeded Virginia left them the last Ohio-based school in the tournament.

“I think somewhere scarlet can turn into green,” he added, referring to Ohio State's and Ohio’s colors.

Boals means that as no slight to Ohio State. The second-seeded Buckeyes lost 75-72 to 15th seed Oral Roberts on Friday.

Boals maintains a soft spot for the in-state rival after spending seven seasons as an assistant on Thad Matta’s staff at Ohio State from 2009-16.

“It meant the world to me. I saw him before the game introduction and gave him a little fist bump,” Boals said. “I would not be here without him.”

Southern California coach Andy Enfield avoided mentioning UCLA when asked how a 72-56 win over Drake in the first round had the potential of increasing the Trojans’ presence back home.

“We have 45 wins the last two years, which is third in the country behind Baylor and Kansas,” said Enfield, who was the Pac-12 coach of the year this season, the first USC coach to be so honored since George Raveling in 1992.

“So after a two-year break, this meant a lot to our program,” he added, noting the Trojans would likely have secured a berth last year with a 22-9 record had the tournament not been canceled because of the pandemic.

First, a meeting with NCAA President Mark Emmert. Down the road, maybe an audience with President Joe Biden.

Those are among the hopes of Iowa guard Jordan Bohannon. He’s among the players leading the way in a social media effort to raise awareness about inequities in college sports.

Bohannon, Isaiah Livers of Michigan and Geo Baker of Rutgers helped start a movement that calls for rules changes. The hashtag #NotNCAAProperty was trending on social media.

Bohannon promised other ideas moving forward. He said the players involved in the campaign are hoping to meet with Emmert within the next few weeks.

Emmert is open to the conversation.

An NCAA spokesperson said in a statement Sunday that the NCAA chief "would be happy to connect either virtually or in person when appropriate with any student-athletes who want to engage.”

The underdogs from Oregon State got into the spirit of playing at historic Hinkle Fieldhouse.

Hours before facing Oklahoma State on Sunday night, the Beavers posted a video on Twitter of 7-foot-1 center Roman Silva carrying 6-3 guard Gianni Hunt over to the basket to measure the rim’s height. Coach Wayne Tinkle also helped with the measuring.

It was an homage to a scene in the movie “Hoosiers” that was shot at Hinkle. And of course, in the movie tiny Hickory High won the state title. The Beavers followed up their rim measuring with an 80-70 win over Cade Cunningham and the Cowboys.