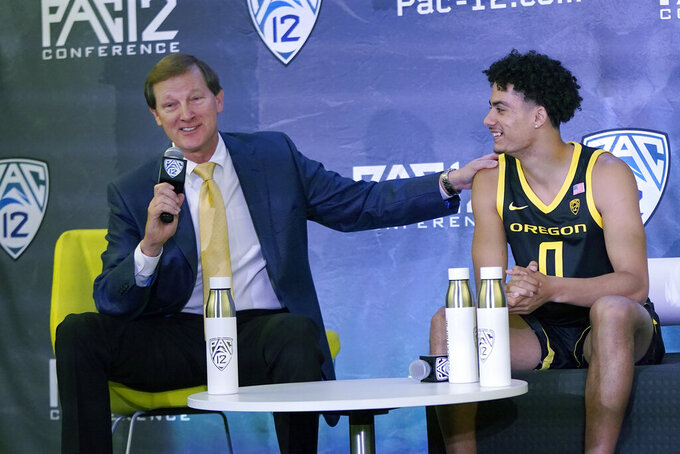 The Pac-12 had been an afterthought in the NCAA Tournament in recent years, the number of teams getting in dwindling, the deep runs into the bracket rare.

The conference took a big turn last season with three teams reaching the Elite Eight and UCLA playing in the Final Four, changing national perceptions while boosting confidence around the league.

Now it's time to take that next step of consistently doing well in March.

“I'm really excited for the league with what we accomplished at the NCAA Tournament,” Arizona State coach Bobby Hurley said Wednesday from Pac-12 media day in San Francisco. “It's what we've been talking about in head coaches' meetings for years. To have that success translate in the NCAA Tournament. Our conference, people are viewing us different because of that success. We have good momentum.”

The Pac-12 was arguably the best conference in last year's tournament, going 13-5. UCLA, Southern California and Oregon State all reached the Elite Eight. The Bruins were seconds away from reaching the NCAA championship game, losing to Gonzaga on Jalen Suggs' banked-in running 3-pointer at the buzzer.

Led by preseason favorite UCLA, the conference is again loaded with talent headed into the 2021-22 season and the deep runs last spring have buoyed the confidence of teams across the league that they can do it, too.

“It gave us a huge confidence boost, especially Oregon State and the ride they had, knowing we played them two really tough games,” Washington State coach Kyle Smith said. “And just knowing, I thought the league was good and to get that national respect, we were working out in the spring with our chests kind of puffed out.”

Instead of the usual five players on the first team, this year's team has 10 and five on the second team.

Oregon was forced to go with a small lineup for most of last season after 6-foot-11 forward N'Faly Dante went down with a knee injury.

The Ducks will have more options this season with Dante expected to return and four players on the roster 6-11 or taller.

Oregon State was picked to finish last in the Pac-12 in the preseason poll last year and went into the conference tournament as the No. 6 seed.

The Beavers became one of the surprises of March Madness, winning the Pac-12 Tournament then reaching their first Elite Eight since 1966 as a No. 12 seed.

Now they enter the new season with added expectations.

“The run we had last season, we can be satisfied,” Oregon State guard Jarod Lucas said. “We can be happy about last season, it was a great season, but here we are a month away from a new season. We're going in with the same mindset, to win every game and get better in practice day in, day out.”

The Beavers were picked to finish eighth in this year's preseason poll.

Battey has been a natural leader at Colorado, though he was able to share some of the load last season with a veteran-laden roster that included one of the best players in program history, point guard McKinley Wright IV.

Now that Wright and others are gone, the senior big man becomes the unquestioned leader on a team filled with new players — a role he's still feeling out.

“Last year, we had a bunch of seniors where I didn't have to hold their hand so much, as I would say, through everyday practice,” Battey said. “This year, I'm really trying to bow the line of when to lead and when to let them figure it out for themselves, let them learn. I'm trying to fight that urge, lead when I need to and let them grow.”