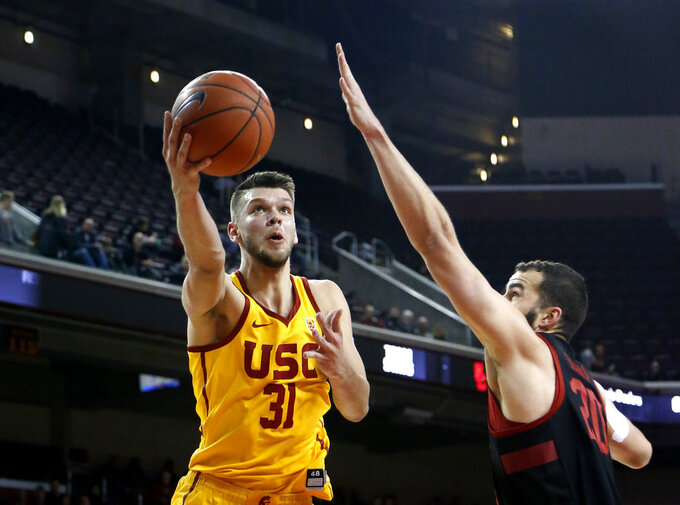 GAME OF THE WEEK: UCLA at Oregon, Thursday. The Ducks and Bruins were the Pac-12's preseason favorites, but have suffered some unexpected losses. Oregon lost to Texas Southern at home in late November and to Oregon State last week to open conference play. UCLA cost coach Steve Alford his job with an even nonconference schedule that included losses to Liberty and Belmont. Even so, both teams have rosters loaded with talent — the Ducks less so with star freshman Bol Bol out due to a foot injury — and should get up and down the floor quickly.

LOOKING AHEAD: Arizona and Southern California had inconsistent nonconference seasons, but they're tied with UCLA atop the Pac-12 after winning both games the opening weekend. The Wildcats have the Bay Area trip this week, facing Stanford and California, while the Trojans face the Oregon schools.

INSIDE THE NUMBERS: Two of the Pac-12's longest series wins streaks will be on the line this week. Arizona has won 17 straight against Stanford and Utah has a nine-game winning streak against Washington State. ... The opening weekend was filled with lopsided wins. The average winning margin was 12.3 points and six of the 10 games were decided by double digits. ... Washington's Matisse Thybulle has 246 career steals, tied with Arizona State's Stevin Smith for fourth on the Pac-12's all-time list.

PLAYER TO WATCH: Nick Rakocevic, USC. The Trojans' junior forward averaged 25 points and nine rebounds while shooting 70 percent in wins over California and Stanford last week. Rakocevic had a career-high 27 points against the Bears on his way to being named the Pac-12 player of the week.

ON THE WOMEN'S SIDE: No. 19 Arizona State has a tough second Pac-12 weekend with No. 6 Stanford visiting Tempe on Friday and No. 24 Cal on Sunday. ... Cal's trip to Arizona will feature two of the nation's top scorers. ... Arizona's Aari McDonald is second nationally at 25.4 points per game and Cal's Kristine Anigwe is ninth at 22.1. ... It's getting to the point where it's surprising when Oregon's Sabrina Ionescu doesn't get a triple-double. She extended her NCAA record to 15 against Washington State last week, finishing with 17 points, 12 rebounds and 10 assists. Ionescu leads the nation with nine assists per game.