Pac-12 Tournament could be a wild ride in Las Vegas 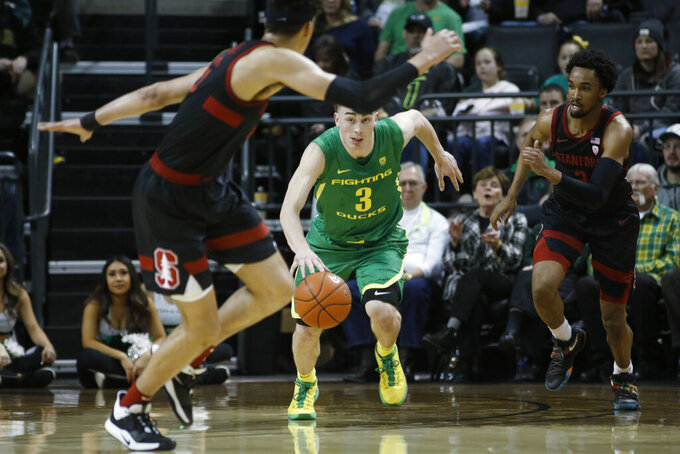 Oregon guard Payton Pritchard (3) brings the ball up during the first half of the team's NCAA college basketball game against Stanford in Eugene, Ore., Saturday, March 7, 2020. (AP Photo/Thomas Boyd)

LAS VEGAS (AP) — The Pac-12 had one of the closest conference races in the country during the regular season. Five teams were within two games of the lead heading into the final week and No. 13 Oregon clinched the title on the last day of the season.

The parity should make for a fun conference tournament.

The Pac-12 Tournament starts Wednesday under the bright lights in Las Vegas, and there could be a bit of chaos before a champion is crowned Saturday.

"It's a wide-open tournament," Oregon coach Dana Altman said. “We hope we have seven NCAA Tournament teams. The other teams are going to try and get their spot.”

A year ago, the Ducks became the second team to win four games in four days to take the tournament title.

This season, Oregon clinched its third regular-season season title in five years by beating Stanford last Saturday. That gave the Ducks the No. 1 seed in the Pac-12 Tournament and a first-round bye along with UCLA, Arizona State and Southern California.

Arizona and Colorado appear to be locks to hear their names called on Selection Sunday. Both have resumes that should get them into the field of 68.

USC seemingly burst through the NCAA Tournament bubble with its win over UCLA last week.

The Bruins had a nice turnaround at the end of the season, winning seven of their final eight games to move onto the NCAA Tournament bubble and earn Mick Cronin coach of the year honors his first season in Westwood. An early exit from the Pac-12 Tournament could make for some tense moments on Sunday, though.

Arizona State has sweated out Selection Sunday the past two seasons, earning First Four spots. The Sun Devils appear to be in good shape after beating Washington State on Saturday, but losing their first Pac-12 game against the Cougars or Colorado could make it dicey again.

“I can't say 100 percent, but I imagine we are,” Arizona State coach Bobby Hurley said. “We've had a great year, we have a great story, we have one of the most dynamic players in college basketball (Remy Martin) the rest of the country should get to see.”

Stanford had a chance to boost its NCAA Tournament resume last Saturday against Oregon. A loss means the Cardinal may need to win a game or two in Las Vegas to get through to the big bracket.

Washington was picked to finish third in the preseason poll thanks to a stellar recruiting class, but failed to live up to expectations, finishing last in the Pac-12.

The Huskies may be the last last-place team any team wants to face in the conference tournament.

Washington, which opens the tournament against Arizona, has a talented roster, including two of the nation's top freshmen in Isaiah Stewart and Jaden McDaniels. The Huskies also closed the season with three wins in four games, including a difficult road sweep of the Arizona schools.

“Our guys have been working hard in practice, been really resilient,” Washington coach Mike Hopkins said. “The coaching staff has done a good of staying with these guys. We're getting better.”

The Pac-12 Tournament is typically filled with star-quality players and this year's is loaded.

Oregon's Payton Pritchard was the Pac-12 player of the year after becoming the fourth in history to lead the conference in scoring and assists.

Martin at Arizona State pushed Pritchard for player-of-the-year honors and Washington State's CJ Ellerby can put up points in bunches.

Arizona has a high-level freshman trio as its core in Nico Mannion, Josh Green and Zeke Nnaji. Oregon State's Tres Tinkle has been one of the Pac-12's best players the past three years and USC forward Onyeka Okongwu had a dominating freshman season.

Washington has its freshman duo and Colorado has a pair of talented upperclassmen in McKinley Wright IV and Tyler Bey.

It should be quite a show along The Strip.